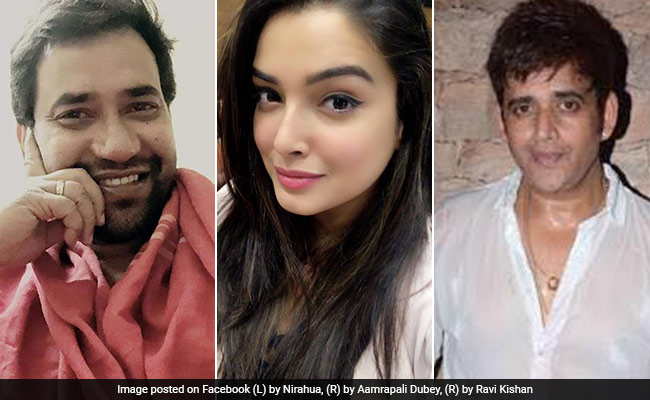 Many superstar of Bhojpuri films can be seen trying their luck in the Lok Sabha elections (Election 2019). There are so many news about Bhojpuri cinema superstar Amrapali Dubey, Khesari Lal Yadav, Dinesh Lal Yadav, Nirhua, Ravi Kishan and Pawan Singh fighting for Lok Sabha elections. Have also started. Bhojpuri superstar Ravi Kishan has joined the BJP anyway, while Bhojpuri singer Kalpana Patwari also took the BJP’s control some days ago. In this way most of the Bhojpuri cinemas can be seen in the election riot in 2019.

Jubilee star of Bhojpuri Dinesh Lal Yadav Nirhua has already joined the Samajwadi Party, and is riding on a bicycle. If you believe in the sources, they can contest elections from Azamgarh. Although there has been no confirmation about this, such speculations are being made. Not only this, the sources are telling even that Amrapali Dubey can also try fate in the Lok Sabha from Gorakhpur with bicycle.

Bhojpuri Superstar Khesari Lal Yadav has decided to rush in the RJD boat of Lalu Prasad Yadav. Regarding Khesari Lal Yadav, it is being said that he will fight from Maharajganj in Bihar. However, there is no official statement from Star. On the other hand, the sources say that Bhojpuri star Pawan Singh is also in this row for contesting election. They can contest the BJP ticket from Bihar’s Ara. On the other hand, Ravi Kishan will fight from the BJP from Jaunpur in Uttar Pradesh. These information is given by sources linked to these stars.

If these reports coming out of these superstars are true, then Uttar Pradesh and Bihar will get tremendous fuss during Lok Sabha elections because all the parties will try to cash in on their star power.