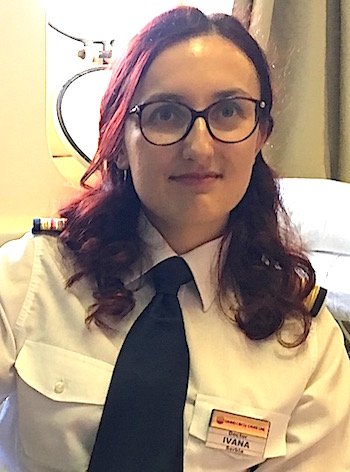 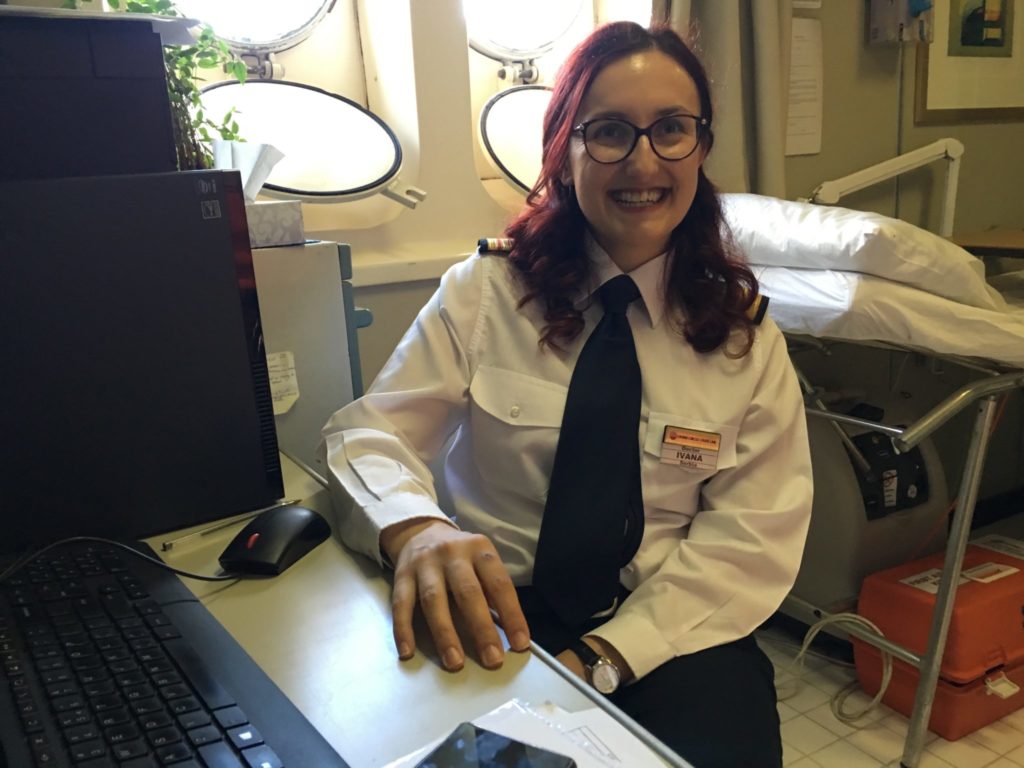 Being seasick is miserable. Dr. Ivana Bogdanovic knows the queasy stomach sensation quite well. She learned it the hard way.

On her first cruise as a doctor for Grand Circle Cruise Line, Ivana experienced that dreaded mal de mer.

“I had just started my job,” she said. “It was my first time on a ship, the Clio in Barcelona. We were going through Gibraltar and the ship was rocking and pitching.”

It was bad enough having the yucky feeling but Dr. Ivana had an even bigger worry.

“I thought, ‘If I get seasick when we cruise, how am I going to do my job? Am I going to have to quit?’”

Her fears were quickly put to rest. “I got my sea legs and have never gotten seasick again. I never take anything. I just don’t get it anymore,” she said.

But that miserable experience was enough to let Dr. Ivana know how fellow cruise ship passengers must feel and how she can help them get better.

“It’s not fun,” she acknowledged. “The best thing is to stop it before it happens.”

On our 10-day cruise aboard the M/V Corinthian, a few people did get seasick during rough seas. But most of the 79 passengers are seasoned travelers and know how to prevent the uncomfortable feeling.

We also have easy access to the good doctor’s office which is conveniently located on Deck 2, right across from the ship’s dining room.

Born in Serbia, Dr. Ivana began working with Grand Circle Cruise Line in May. As the ship doctor, she gets to combine her two loves – traveling and using her medical knowledge to help others.

“I didn’t get to travel much when I was a child or when I was in the college,” she said. “My whole family lives within a 20-mile radius of each other. In Serbia, not many people decide to leave.”

As a young child, Dr. Ivana wanted to become a teacher or an ice skater when she grew up. However, when she was 13 years old, her 40-year-old father died from the toxic damage of using pesticide spray on his plum trees. His death seemed to spur her into the field of medicine where she wanted to help others.

Dr. Ivana is the oldest of three children. Her brother is a waiter. Her sister is a language teacher. Her mother is retired. As for her own excellent English, Dr. Ivana said she mostly learned as a child from watching American television shows.

“When I went to school, we started learning English in the fifth grade,” she said. “It is now mandatory in the third grade in Serbian schools but I learned from my favorite TV shows.”

Every Saturday from 8 a.m. to noon, the young Ivana would work on her English-speaking skills by curling up in front of the family TV to watch cartoons. “‘Scooby Doo and Dexter’s Laboratory were my favorites,” she said.

As she grew older, Chicago Hope and Ally McBeal became shows to watch. “If you wanted to know what was happening in the American shows or the movies, you learned to speak English,” she said.

Working four months on the ship and two months off, Dr. Ivana said she will be getting married when she heads home later this year. Her future husband works at home. “He knows that I travel, that I like being the doctor on a cruise ship. It is something I have to do.”

Surprisingly, the cruise ship ailment she treats most is not seasickness, Dr. Ivana said. It is the common cold.

“When people come on here, the weather is often different than it is at home. They get tired from traveling to get here. And the weather changes even as we travel so people often get a cold,” she said. “Sometimes people don’t bring proper clothing because they are dressing for the weather at home.”

I knew what she means. On our cruise through the British Isles and Ireland, temperatures are in the low 50s during the night and in the 60s during the day. My kind of weather!

“Last cruise, I treated zero passengers,” Dr. Ivana said. “No one got sick or hurt.”

On our cruise so far, a woman fell and sprained her wrist which required an X-ray and a wrist wrap and a few people experienced seasickness which sent them to Dr. Ivana for treatment.

“Once it is started, it is hard to treat,” she said. “The best thing is to prevent it. If you know you tend to get seasick, take the medicine before you do. It can be easily prevented. Once you are seasick, taking the medicine won’t help.”

“Don’t drink too much water at once. You don’t want to fill up your stomach with water,” she said. “Avoid sweets and alcohol. Eat dry food like crackers and drink ginger ale. Eating green apples helps some people.”

Some passengers on my cruise swore by the Sea-Band wristbands, an acupressure-inspired product that has a plastic bead which presses again the Nei-Kuan pressure point on the palm side of the wrist. Sea-Bands are available without prescription in most drug stores.

Like Dr. Ivana, I got seasick once about 20 years ago. It was on a Florida deep sea fishing trip and I vividly remember the yucky feeling.

Now I don’t take anything or do anything to prevent it. Having it once was enough for me. But it is nice to know that Dr. Ivana’s office is just a few doors down from my cabin. 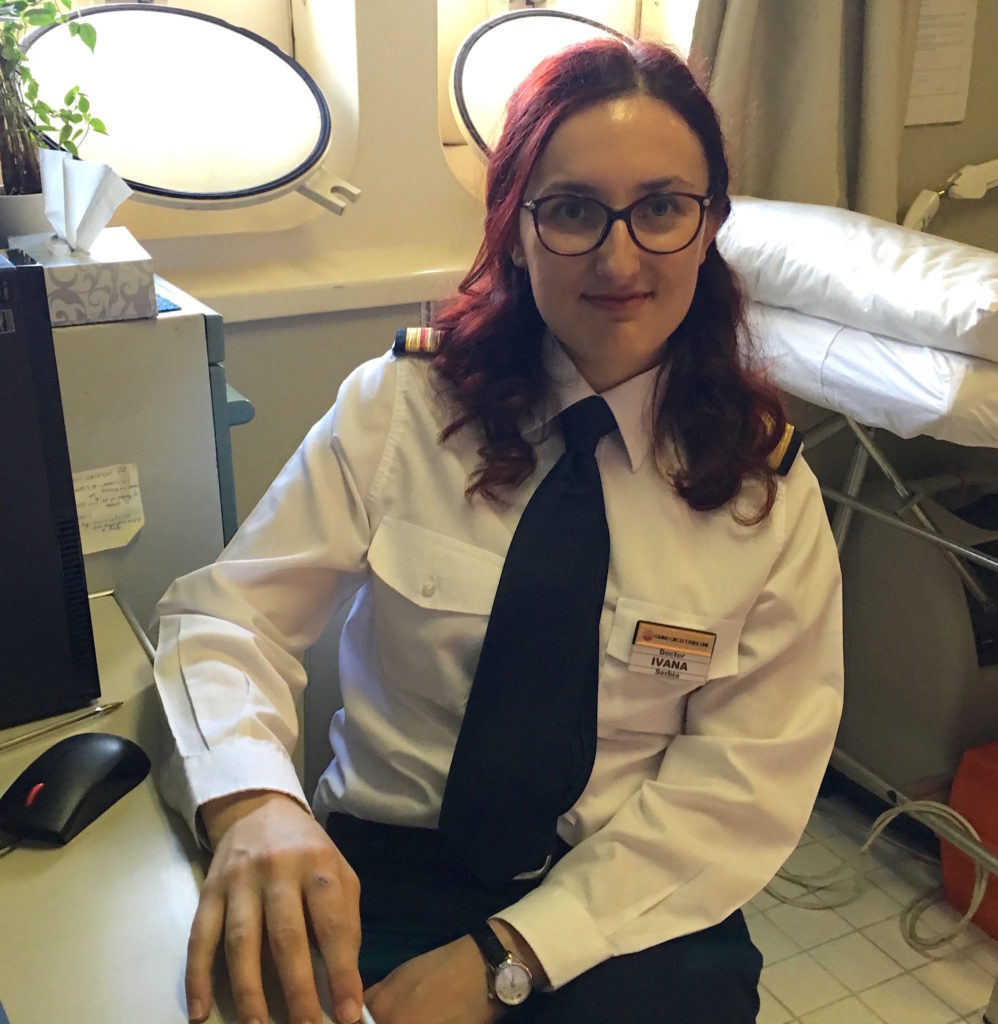