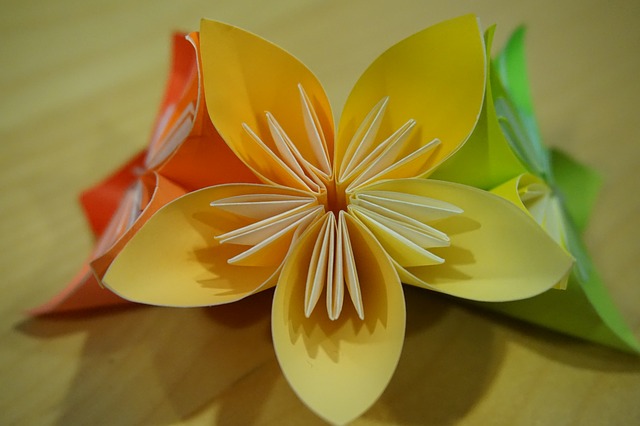 When I was a little kid an activity that always kept me busy was folding paper and creating things. Paper airplanes were my specialty.  Weren’t they every kid’s specialty?  🙂  I also liked to fold the paper as small as I could, cut it in different spots and then see what kind of snowflake that created when the paper was unfolded.  Other than airplanes and snowflakes, there wasn’t much else a person could make from folding paper.  Right?

That’s what I thought until I learned the Japanese had an art called origami.  Oh my!  I can’t believe what you can do with folded paper!  But even though the article published in The Habitat presents some convincing arguments … origami relieves stress, improves fine motor skills, it’s fun! … I’m still convinced that I should make it a hobby unless it’s a hobby I can turn into an income stream.

Two fun facts that I learned preparing this post.

A 31 compartment, origami, traditional, Chinese Thread Book folded from 31 sheets of paper. The units interlock with no glue. I painted the flower petals from white to the gold finish. See how https://t.co/J1976heaee #origami pic.twitter.com/jRdtjbB8VV

Looking for an easy kids project for the rainy weekend? How about these cool #origami butterflies! Check out the video: https://t.co/lrh7eAX5CM. #HHLunch #Handmadehour pic.twitter.com/a9mg0WK4Z5

Have you seen #Paloma, lighted metal #origami #birds in the trees at @DiscoveryGreen? Turn up the volume to hear the video, and be sure to see it in person before it flies away this #Monday, February 24th! #discoverygreen #acrossthestreet #paloma #DowntownHouston #discoverygreen pic.twitter.com/cWBfB4IOHq

Let hope and dreams be the fuel in your journey to the stars ?#ATaleOfPaper #indiedev #gamedev #UE4 #PS4 #indiegame #Origami #indiegaming #conceptart pic.twitter.com/w95o7dYSCp

this is the origami flower that yixing made with the elderly at the nursing home today ? pic.twitter.com/L2EA5fbeeg

One animated character that actually was surprisingly challenging to animate believe it or not was the Magic Carpet from Aladdin. Despite his simple shape, animator Randy Cartwright compared animating him to acting by origami. pic.twitter.com/Fiv1omBRCf

Our first game is available on RedBricks!https://t.co/J0ix9Ju8Bf

Fold Stories is a metroidvania game in an origami world with a rich, deeply captivating, original story.#indiegames #metroidvania #origami pic.twitter.com/h6DZw7ZXpp

Annual Report 3: The most highly cited paper our lab published in 2018 is this freely available review (citations: 15 in Scopus, 19 in Google Scholar, top 1% of Web of Science):
From flat sheets to curved geometries: origami and kirigami approacheshttps://t.co/RlaM7HtazT pic.twitter.com/hWyOMWV9ez