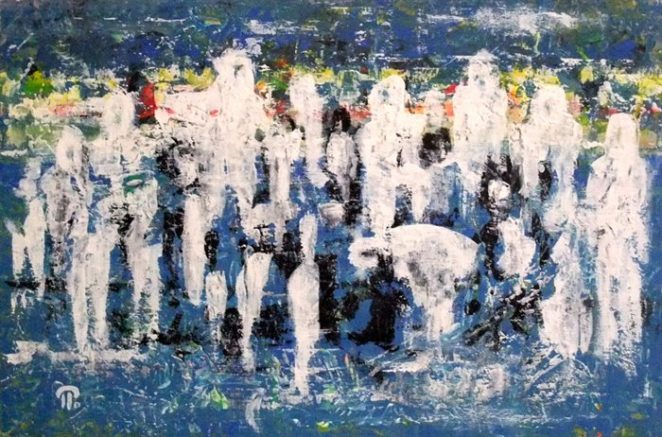 It’s good when people are together and share their work. I paint for people, for their pleasure and food for thought. It’s a joy for me when they understand my expression in the paintings. Any positive feedback will please me. I appreciate it.

People are people when proves to appreciate other people.

Among them came musicians like vocalist Petr Fiala music group Mňága & Žďorp. I was also interested in their musical production, which they doing 30 years. They started playing in Czechoslovakia in 1987, continuing in the Czech Republic and still have fans in the Slovak Republic. On the anniversary of be issued by new LP, CD, MC: Třínohý pes. (Three-legged dog.) Went on a tour of the Czech and Slovak clubs play the new album + old best. Their concert is truly delicious music. The lyrics of their songs can feel human existence with different flavors of life.

They also experience the world of 2014 recorded the album at a studio in Beijing: Made in China. They also had performances in China and interesting experience in this great country.

I want to thank Petr Fiala & band for a great concert and a mention of my paintings on FB pages. So let it long plays and tunes on gigs our guys!

More of my paintings: