When it comes to building homes, the new trends show that architects and environmentalists share one mutual opinion: the buildings/ houses should be environmentally friendly and energy efficient. This idea should be followed from the beginning to the end of the project construction.

How much costs building a house for the environment? Usage of wood, concrete, disruption of the  eco- system, etc. The construction of an average house generates a large stream of waste (approximately 3-7 tons of wood, roofing materials, etc.).

Also, human labor is necessary for building houses, which became a safety problem.  According to OSHA, every year in the United States, 400,000 workers are seriously injured or killed doing construction work.

The Vision of 3-D Printed Home

All of these construction problems made some visionary engineers to start to think about, nonetheless, printing homes.

Berikos Khoshnevis, engineer at the University of Southern California, started transferring his visions about printing homes with a 3-D printer, instead of building them. The printer prototype is built by Khoshnevis’ company Contour Crafting. Check out the video below.

Amazing, right?
The robot- machine is set- up by an architect. Then, it starts layering the concrete in motions similar like squeezing a toothpaste onto a brush. Human labor will be still necessary for the construction, but more for thinking rather than muscle working. The robot machines need surveillance and monitoring.

The first 3-D printed homes, according to the statement of Khoshnevis, will be emergency shelters and low-income housings, especially in developing countries.

Enrico Dini, an Italian inventor, supports the idea of 3-D printing. He created a 3-D printer that creates structures with domes and spheres. He is amazed by the idea of printing, which by his opinion, will limit the construction  only by human imagination.

On the picture below, he is photographed in front of a 3-D printed bridge in Alcobendas, Spain. 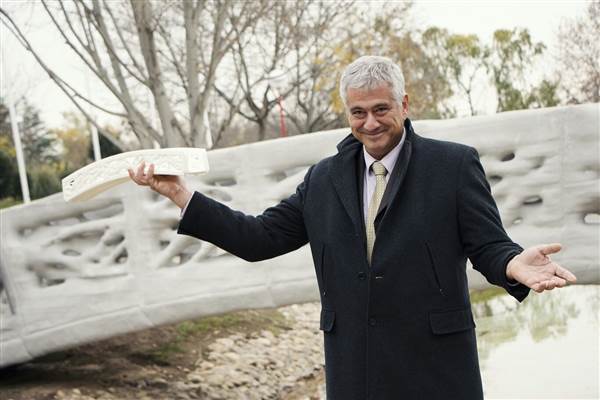 Is this a prototype for building homes on other planets?

Khoshnevis developed a new 3-D building process called Selective Separation Sintering to build physical structures in space, and won first place in the NASA In-Situ Materials Challenge. He points out that important thing for 3-D printing on other planets is usage of local materials, for example: combined robotic construction with high melting-point ceramics, such as magnesium oxide (available on the moon and Mars) and ordinary regolith (planetary soil) to produce tiles that could withstand the heat and pressure of exhaust plumes from landing spacecraft.