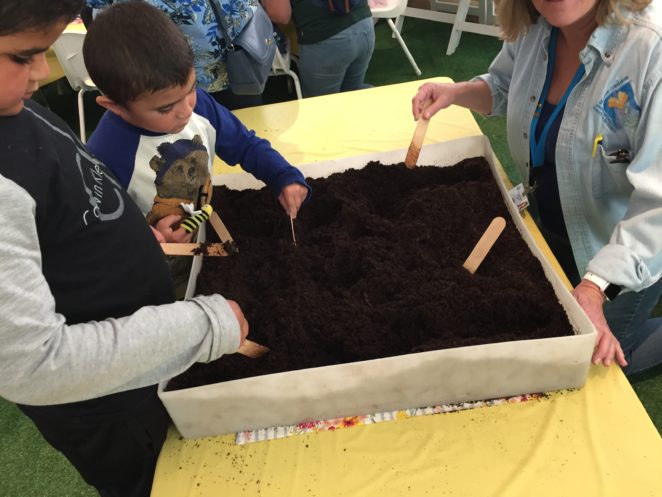 Kids were playing with worms at a kids’ seminar. 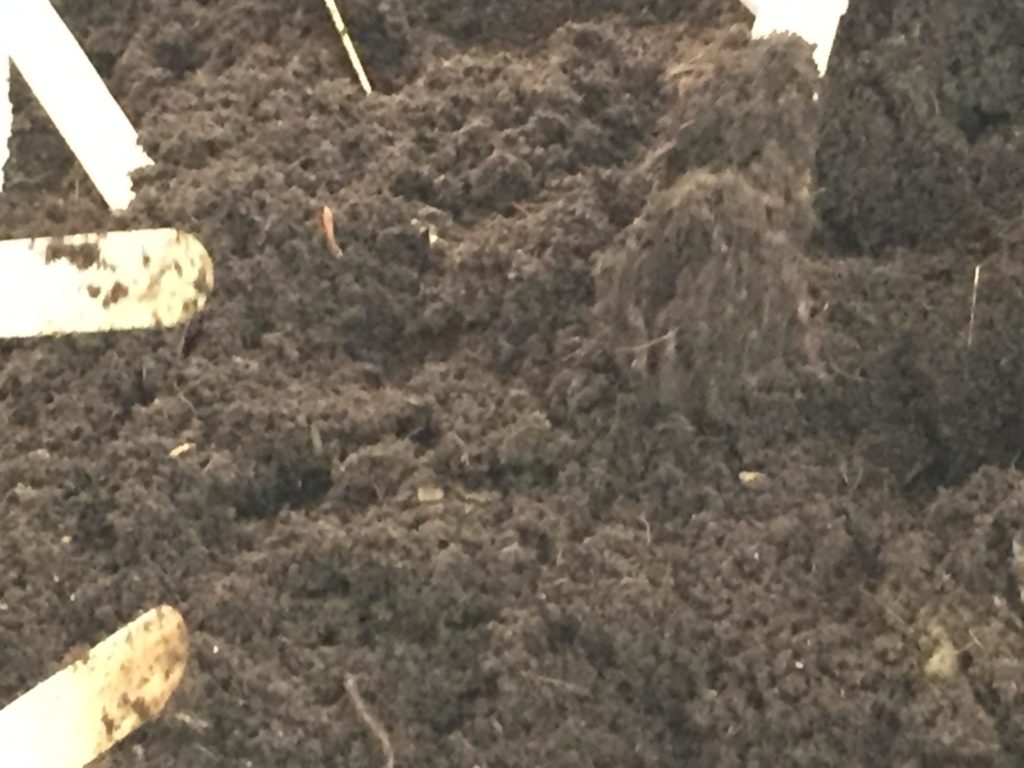 At noon, I walked around the mall, and I stopped at a crowded area, which looked like a people crowded around a street performance. I decided to stop and check out the commotion. A wildlife rep was teaching kids about wildlife, and that many wildlife animals are beneficial to the earth and the ecosystem. The first three animals were small snakes. They looked harmless. (I forgot to take out my iPhone to take some snapshots).  But I remembered to take out my iPhone and take some snapshots of the rest of the animals, which included tortoise, lizard, python, African Bullfrog, worms, and tarantula. The below photo is of the smaller snakes that he showed earlier but I forgot to take a snapshot. Now, they are back in their box. 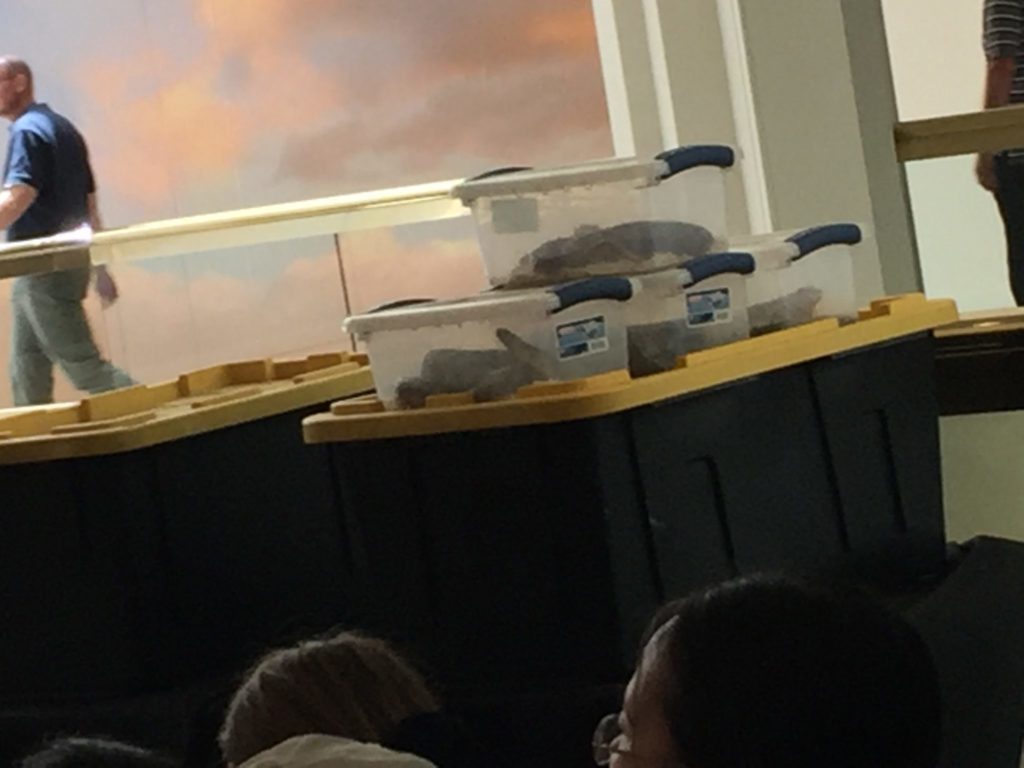 I learned that bullfrogs eat snakes, as well as, sometimes its own kind similar to frog cannibalism. No wonder they are so big for frogs. I have never seen frogs so big before. 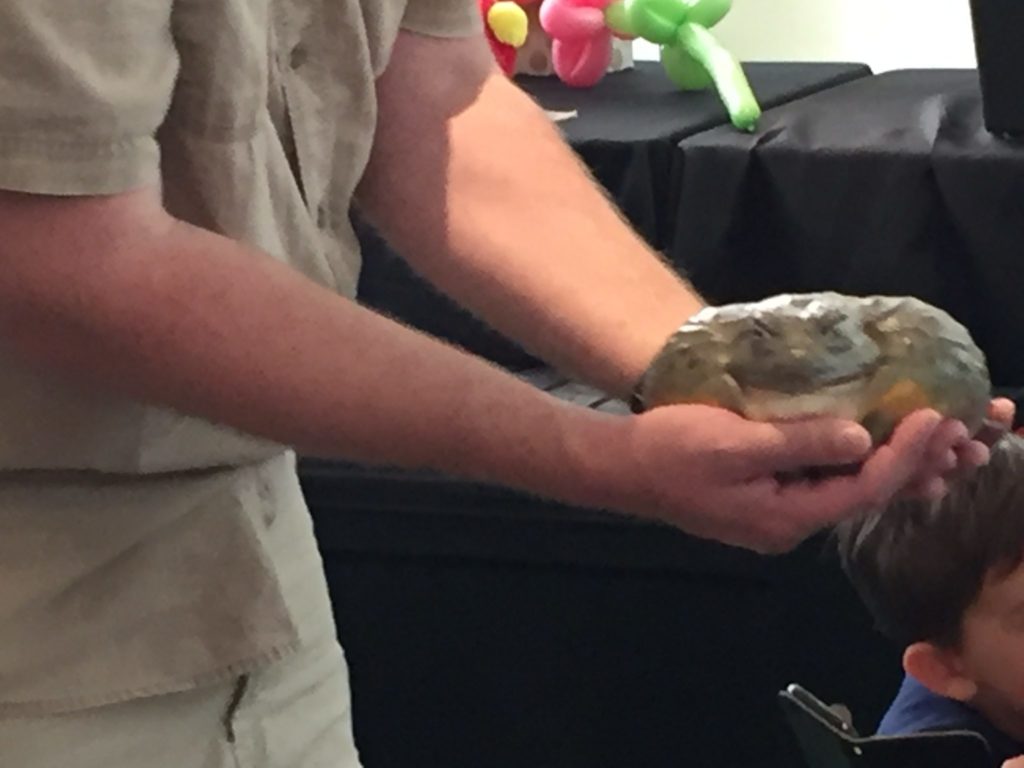 The brown-colored tortoise is a vegetarian, and it prefers to live in the desert, which is why its shell tends to look like desert camouflage because of its sandy color. It actually reminded me of the military uniforms during Desert Storm. It can grow up to 3 feet. 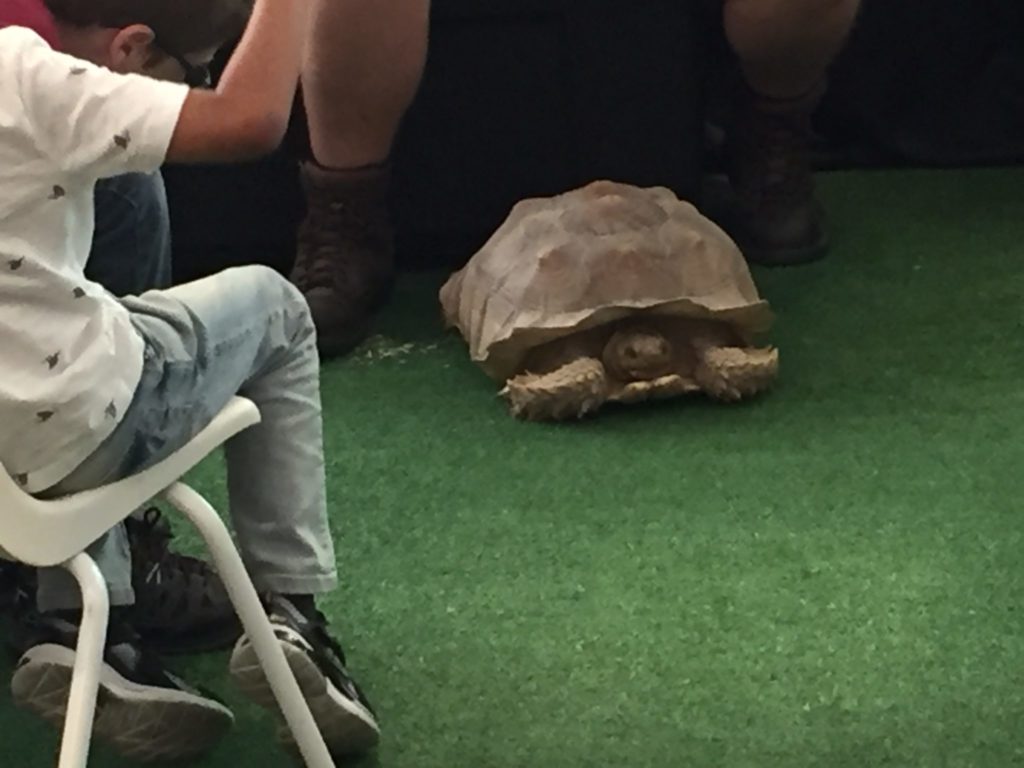 The big lizard is very smart, and it can be trained to do many things, like dogs and cats. 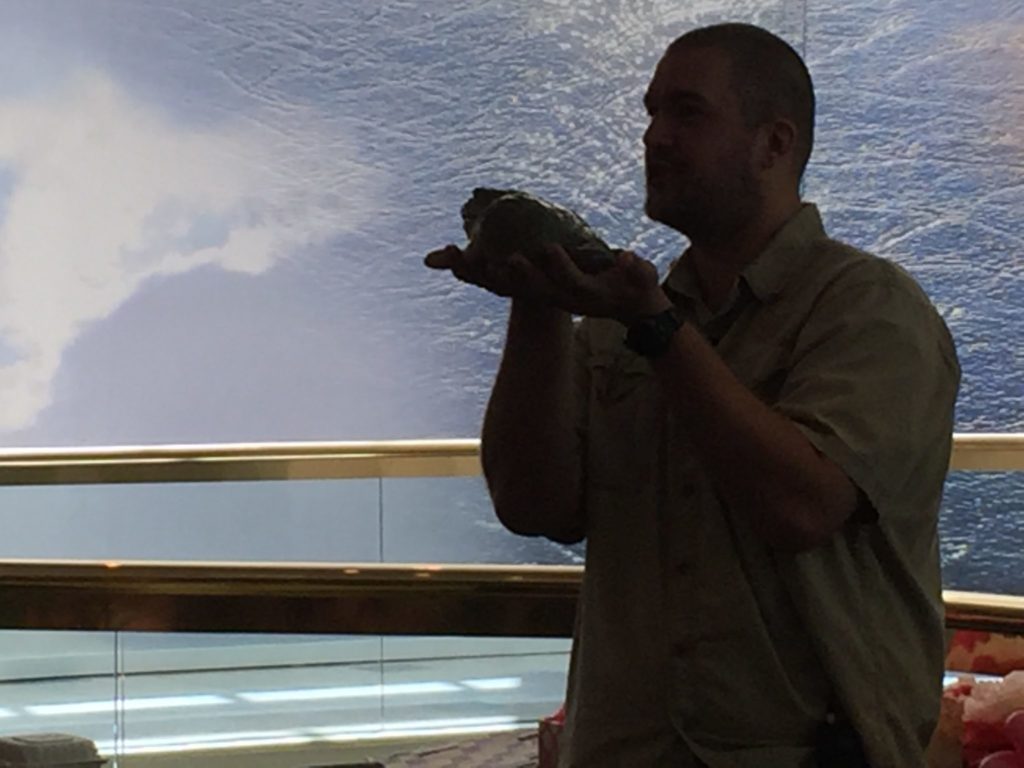 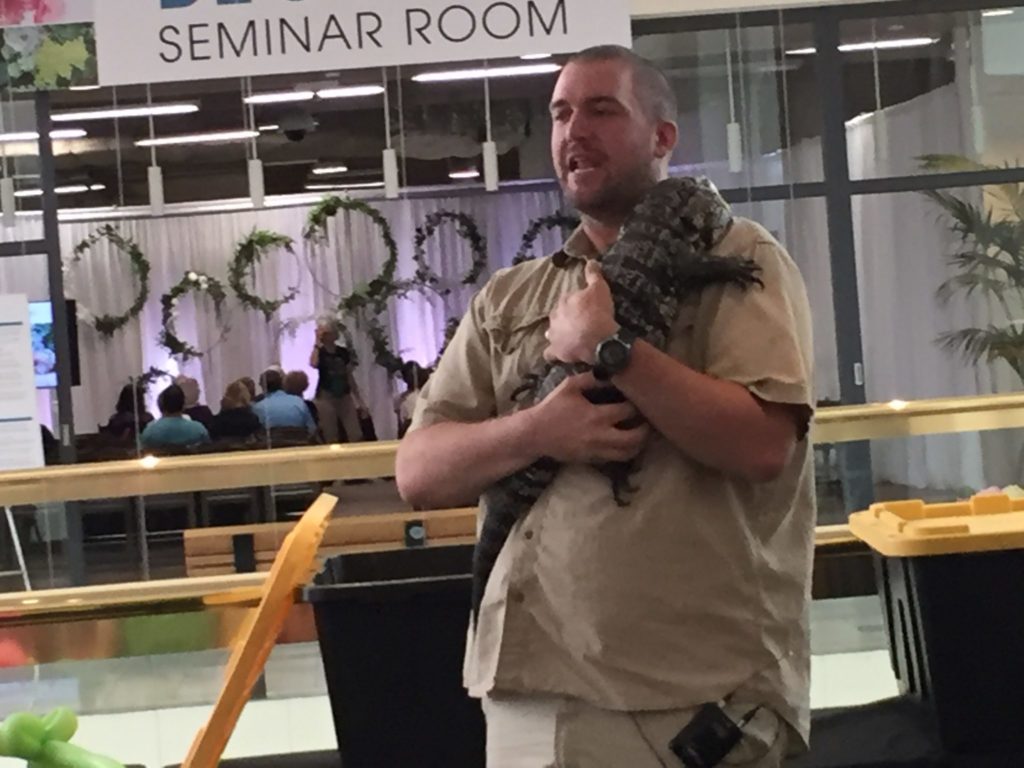 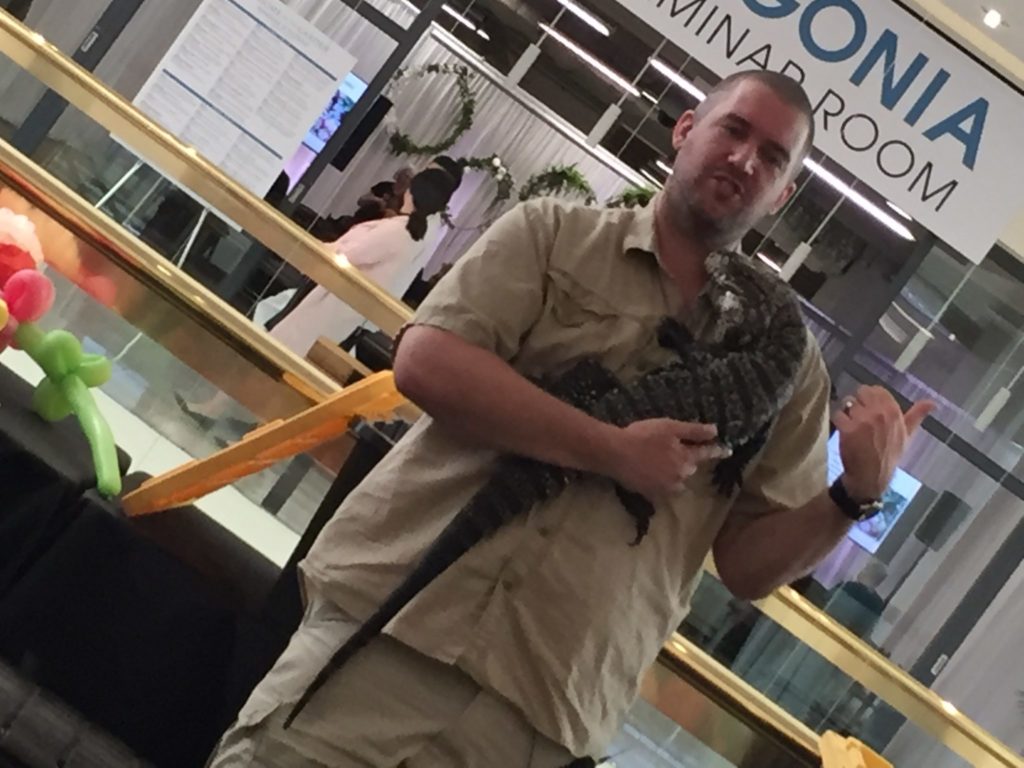 Tarantulas are very delicate and venomous, but not poisonous. 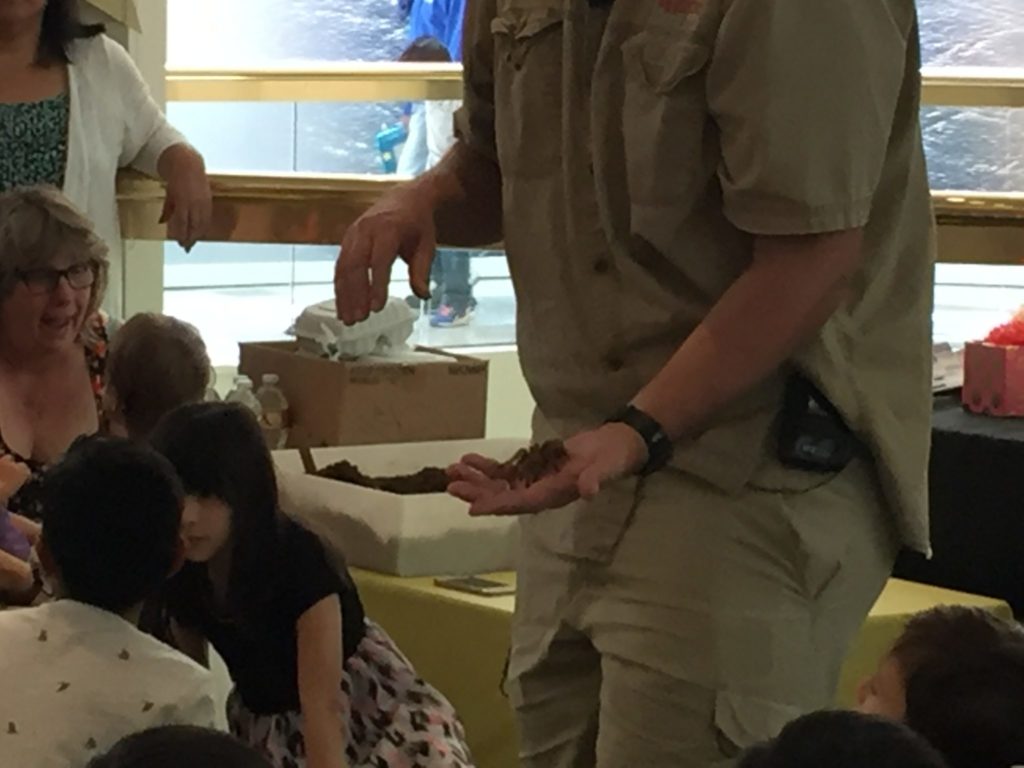 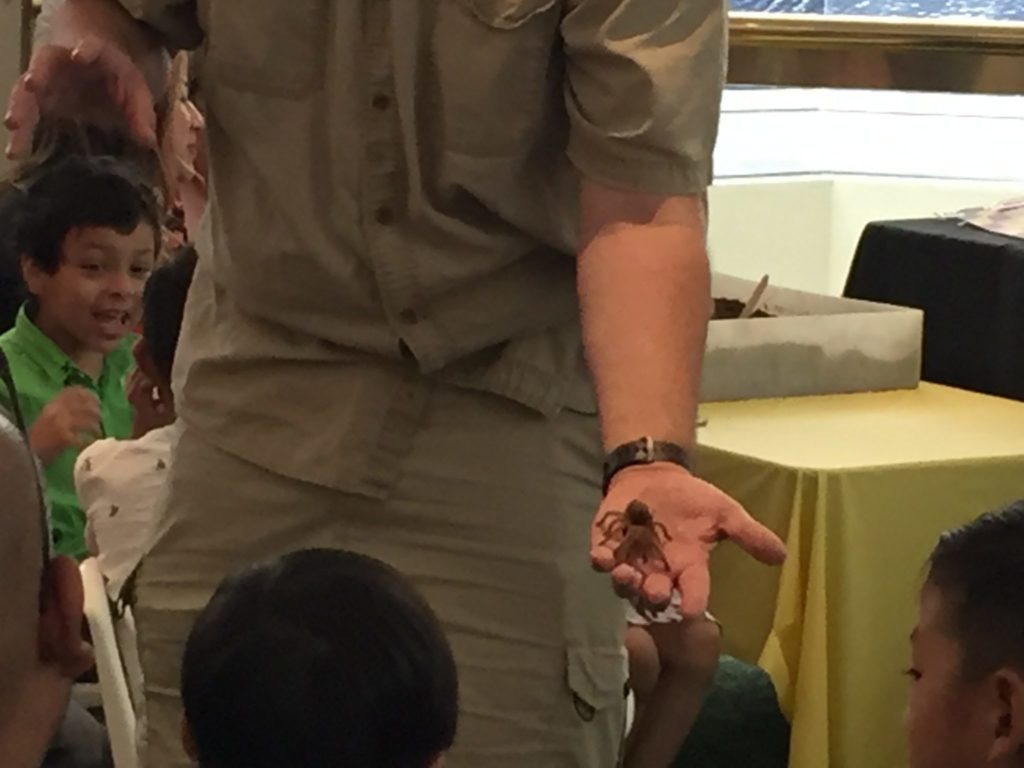 The harmless brown but small snake doesn’t smell. It just gives off bad smell, like a skunk. It feasts on rodents. Poor bunnies, squirrels, raccoons, opossums, and even mice and rats! 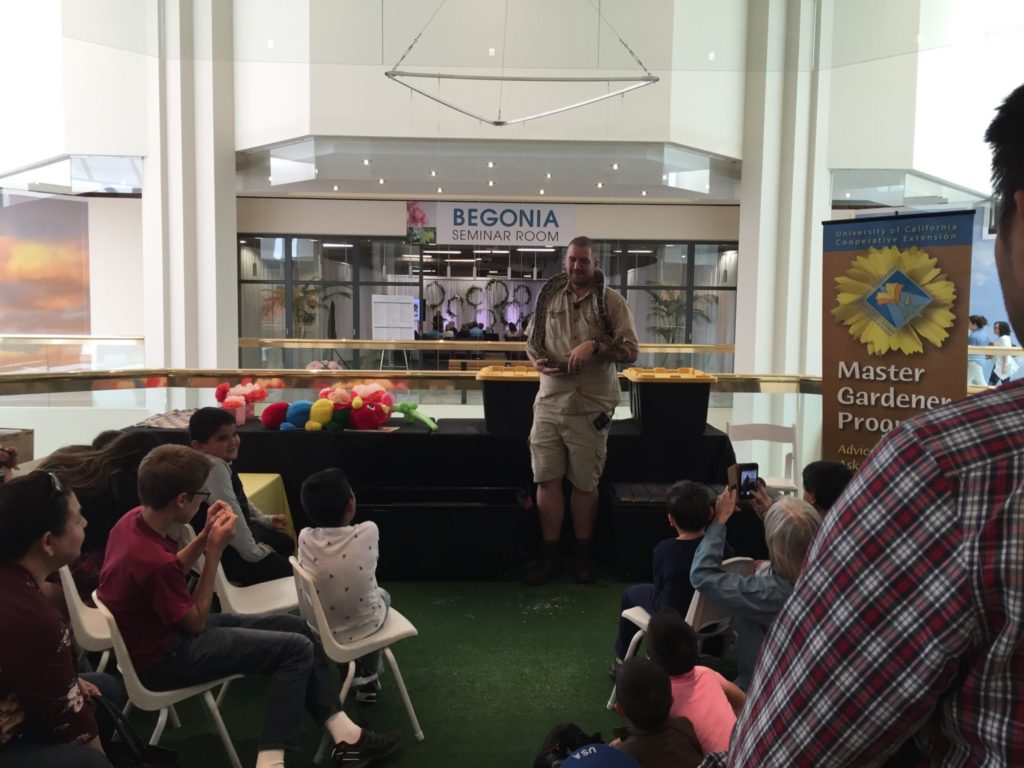 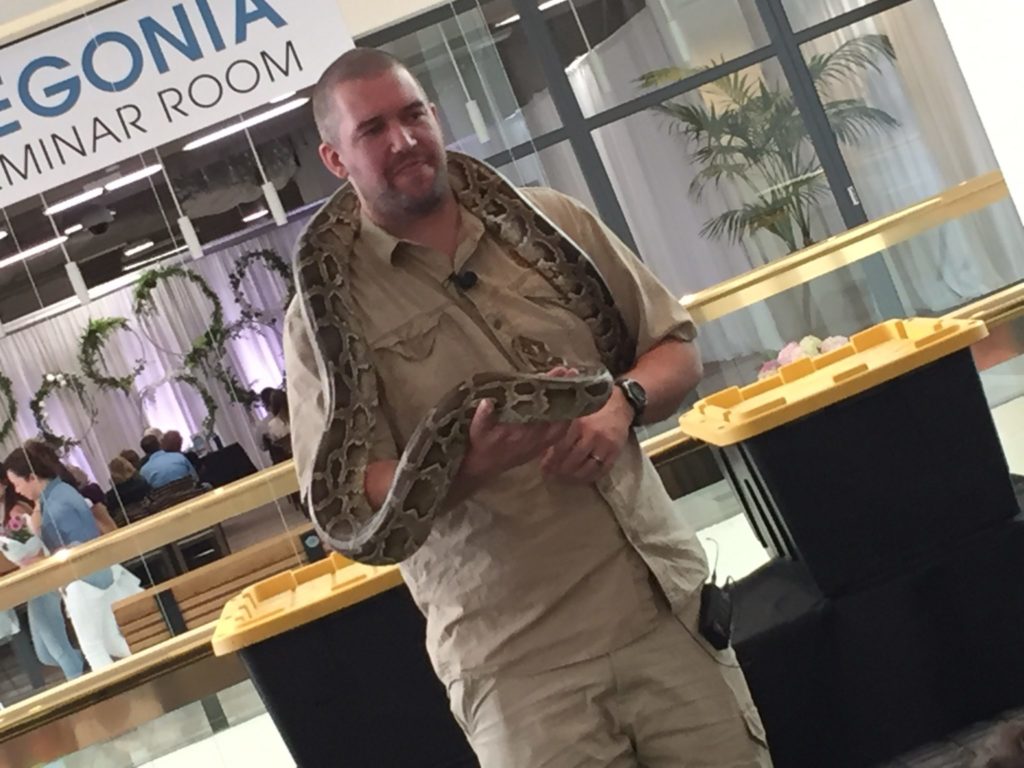 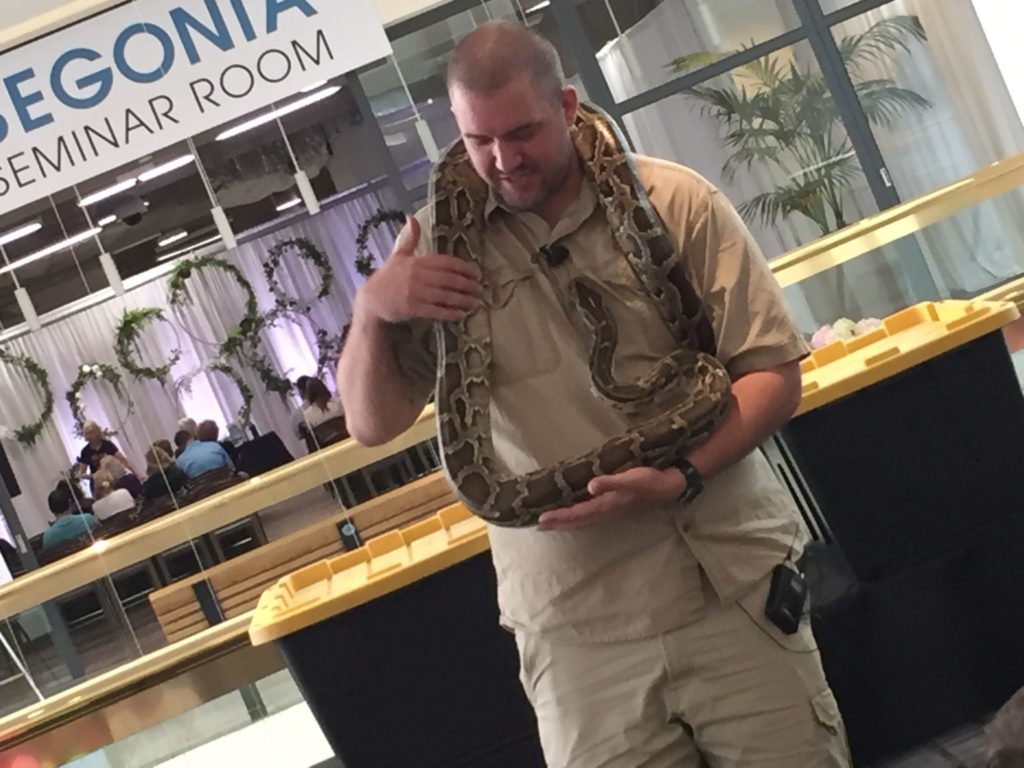 The small turtles prefer to be in or near water, mostly because they feed on fish and crustaceans.

I walked by another kids’ section, and I noticed they were making bee finger puppet. I needed one to cover my thumb splint because the Velcro around my splint was getting old. So, I asked them for one. While taking some snapshots of the bee finger puppet over my thumb splint, I accidentally took Burst pictures. I didn’t even know my iPhone had Burst feature. I recently learned about Burst features in Canon workshops but with a regular camera. 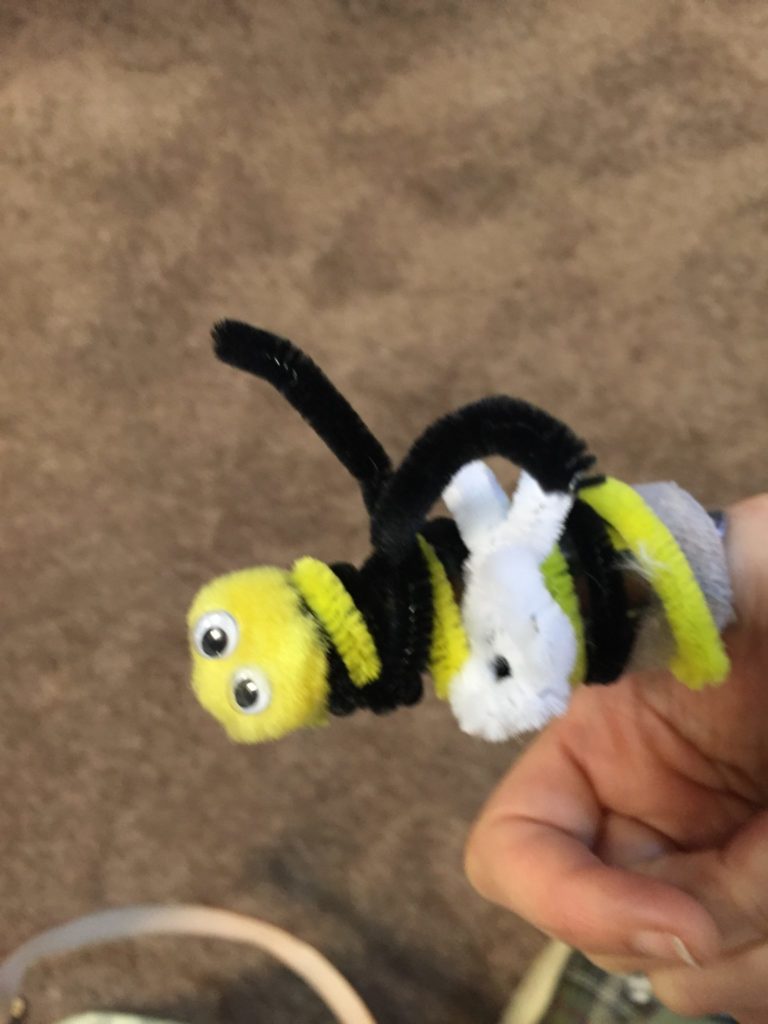 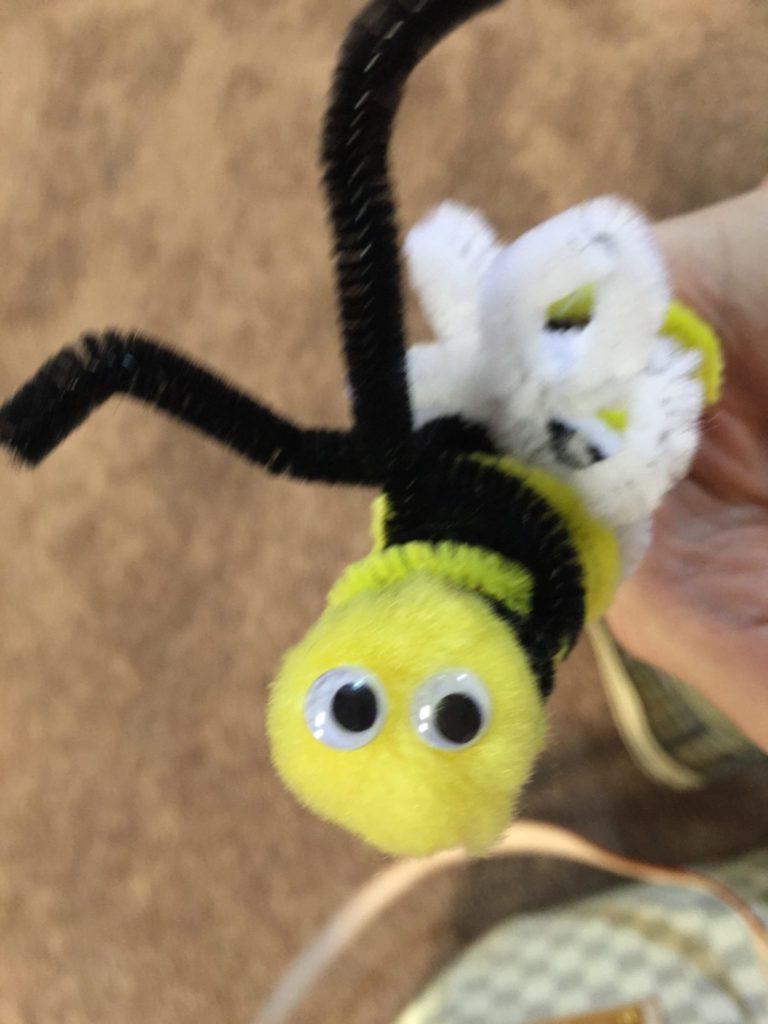 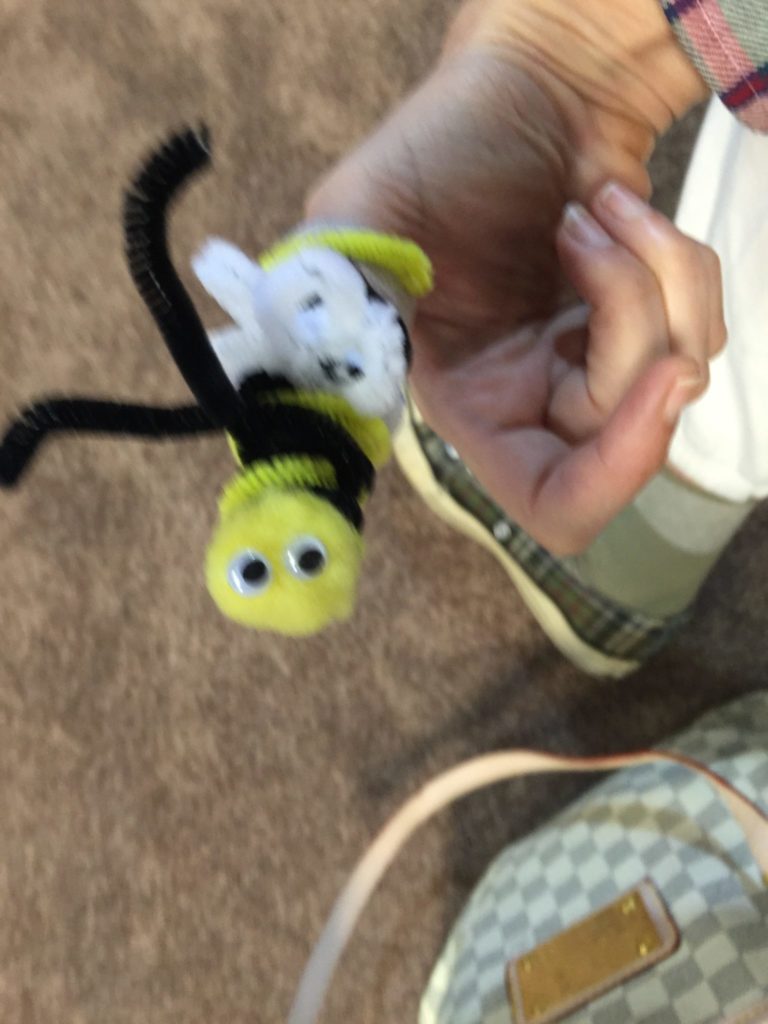