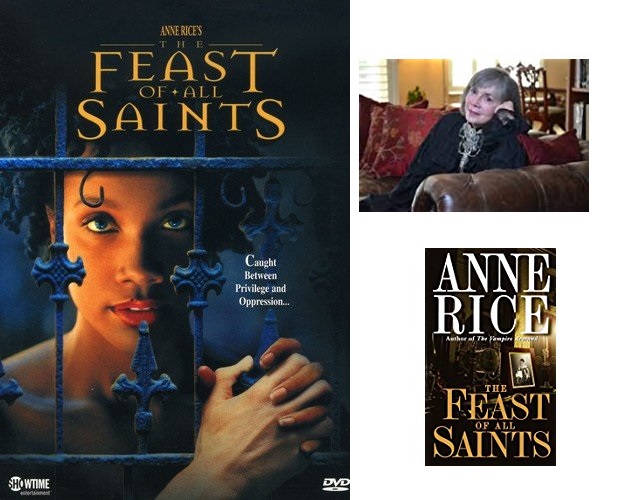 When you hear the name Anne Rice, if you’re like most people you think of vampires. So I was rather surprised several years back when a miniseries was aired on television called the “The Feast of All Saints”.  This miniseries is an adaptation of a book with the same title by Ms. Rice, published in 1979. It is historical fiction about people of color, not slaves but free, who lived in New Orleans, Louisiana during the 19th century.  The series included many celebrated African-American actors whose work in the entertainment industry is well-known, such as Eartha Kitt, Ossie Davis, Ruby Dee, and Ben Vereen.  The series also introduced other not so well-known actors of color like Gloria Reuben, Robert Ri’chard, and Nicole Lynn.

I have yet to read the book, but the televised series was excellent from start to finish and very educational. It shed light on a part of American history that is practically unknown.

Books by Anne Rice ~ https://t.co/abqbln0axq ~ Ms. Rice has written 30+ #books, Her 1st novel, "Interview with the Vampire", published 1976 and another novel “Feast of All Saints” about the free people of color of ante-bellum New Orleans, published 1979, were adapted to film. pic.twitter.com/VL15YFGfYV

All images found at Amazon.com