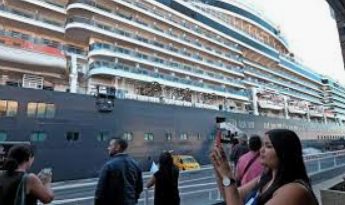 Queen Elizabeth 2 ship has carried more people, further than any other ship ever The Cunard built ship, remains the longest-serving express liner in world history, according to maritime historians. The QE2 – which marked 50 years since it was launched on September 20, 1967, had sailed 5.8 million miles, the equivalent of more than 13 return trips to the moon and she had carried a total of 2.5 million passengers and crew.

After her stint in the Falkland Island war, in April 1982, to ferry passengers to Britain, she made her 50th anniversary trip to my home city at the time, which was Durban. I was working as the Law enforcement chief of a warship-building company. My boss from the company head office wanted to see the impressive ship, moored at Durban’s passenger-liner dock, T-jetty. His wife had accompanied him and he decided to treat me to lunch at the “classy” Ocean-Terminal restaurant which had a great view of the ship, moored alongside.

During the meal, we were chatting about the apparent efficiency or lack thereof, of the access control officers. He remarked that the security staff all had a special-services background and were as such, top-class. I had been instinctively watching operations during our meal and noticed several breaches in their efficiency and did not agree with him.

I naturally pointed them out to him. He hard-headedly disagreed to the point where he kind of dared me to try and get past the guards at the checkpoint and I responded by saying, that not only will I get past them unnoticed, I will board the ship without a British passport and wave to him from the Queen’s private cabin. I excused myself from the table, amid statements of “Andre’ you’re on your own, buddy, I’m not coming to bail you out.”

I assured him it would not be necessary as no one would even notice me. A brief while later I waved to him from the queen’s vacant cabin. He didn’t see me at first but his wife did and she pointed to me. I saw his jaw drop visibly as he recognized me from way below. I got out the same way, without incident. To this day if I tell him something is so, he never questions me. It was a well-calculated risk and special-ops men and women do it all the time.