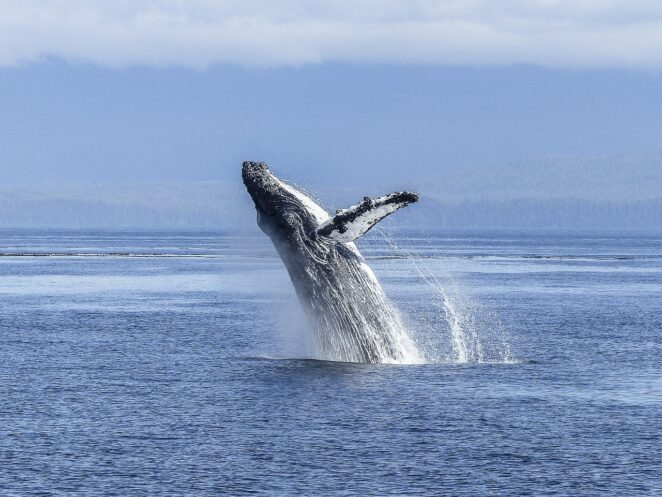 It is the largest animal in the world. An adult blue whale weighs 9,000-136,000 kilograms. It will require about 1,000 to 1,500 human beings each weighing 90kg to reach that weight. Females tend to weigh more than males. When it comes to height, an adult blue whale’s length measures between 70-90 feet though they can exceed to reach lengths of 100 feet.

If we start comparing an adult blue whale with things we are familiar with, it gets more interesting. The tongue of a blue whale measures the same weight with an adult elephant. What about its heart? You can compare it with the size of a small car or automobile. Its gigantic size can be compared to three school buses. Lastly, “A blue whale head is so wide that a football team consisted of about 50 people  can stand on its tongue…and its arteries are wide enough that you could climb through them.”

The young one of a female blue whale, known as a calf, weighs 2,700kg at a length of 23 feet immediately after it’s born. The calf’s mother produces more than 200 liters of milk a day which contains between 35 to 50 percent milk fat. This implies the calf (young one of a female blue whale) drinks nothing but mother’s milk which is rich in fat, gaining over 44kg of weight a day for the first six months.

Blue whales have few predators – sharks and killer whales. However, man poses the greatest threat. It is estimated between 10,000 and 25,000 blue whales are alive. They are listed as endangered animals.