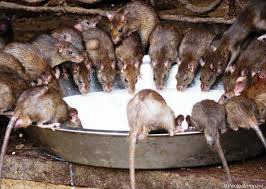 There are so many interesting places you could travel to and see all over the world. I can understand the shudders of those who have a real fear of rats. I am partial I can take them or leave them as long as they are not attacking me or taking over my territory. In Deshnok, India you can find the Karni Mata Temple or Temple of Rats. It is located in Bikaner, India and was named after the goddess Karni who has the belief that her family members would never die but instead would be reincarnated as rats.

I knew a lady who believed dead souls came back as cockroaches. As it sometimes happens the residents of the town believed the legend and now the population of over 20,000 rats are thought to be members of the family of goddess Karni. They are considered to be sacred and are given food and refuge in the temple. They are said to be friendly but with so many rats it’s always good to take precaution. I would not mind getting a peek at this temple, take one photo and I am out of there.