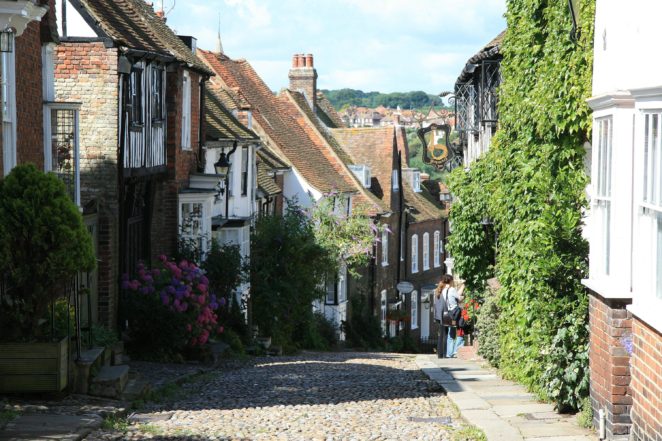 Rye is a beautiful old town in East Sussex that was once a premier English port and a haven for smugglers. These days it is hard to believe that this sleepy town could ever have had an important maritime past, given that it is some two miles from the sea, but that is a result of coastal deposition and the silting up of the river that once provided easy access to the English Channel.

In 1377 Rye was such a nuisance to the French that a raiding party landed and burned down most of the town, after which the English government took revenge on its leading citizens – for being faint-hearted in their resistance – and hanged a number of them.

Many of the buildings in Rye date from the Georgian period, and one of these – Lamb House – was lived in by the American novelist Henry James before World War I. It is now owned by the National Trust and is open to view.

Rye’s most characteristic old street is Mermaid Street, the cobbled surface of which rises steeply from the river towards St Mary’s Church. It is lined with a mixture of half-timbered and red-brick buildings, among which is the Mermaid Inn, which was once frequented by members of the villainous Hawkhurst smuggling gang who would sit with loaded pistols on the tables in case of sudden visits by the revenue men.

At another old Rye inn, the Olde Bell, a revolving cupboard provided a quick exit to the street should it be needed.

St Mary’s Church dates from Norman times. The clock was built in the 1560s and features two gilded cherubs that strike the quarters. There are stained-glass windows by Edward Burne-Jones and Christopher Webb.

The marshes below the town are a haven for wildlife.