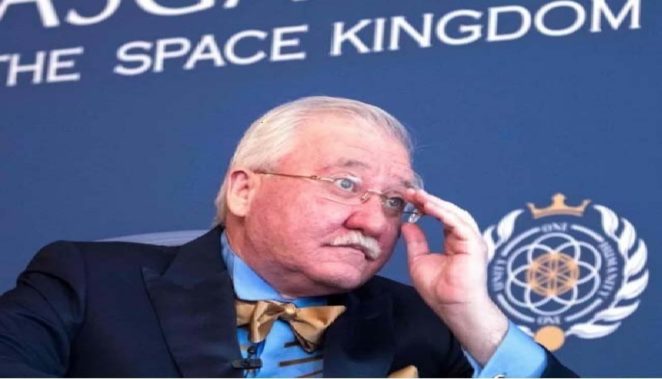 Vienna: Russian scientist Asher Belli is elected the head of the first space kingdom of “Asgardia”.

During a special ceremony in Austria’s capital Vienna, Asher belli, a Russian-born scientist, has been selected as the first head of the “Space Kingdom of Asgardia” for the next five years. Russian scientist took oath as the first head of space kingdom in the presence of Russian billionaire business figures and 200 scientists.

Asher Belli thanked the participants while addressing the event, as the first space kingdom named ‘Asgardia’. He said that being Head of Asgardia, I will establish diplomatic relations between the various countries on earth and the space kingdom and we will apply for the membership of the United Nations. While this space kingdom will play its role in order to avoid environmental destruction.

The first elected head of Asgardia, Asher Belli further says, as scientist I can say that within 25 years the population of humans will be possible in Space Kingdom. While the citizen of the space Kingdom will become the only person who is creative. Due to these conditions, only 2% of the world will be able to become a citizen of space Kingdom.

Be clear Space Kingdom is currently a proposed project, under which human settlements will be settled in space. The project was launched in 2016 by Asher Belli, apart from Russian scientist, he is also a billionaire traders and founder of the “Aerospace International Research Center” organization.

It is interesting, even in the near future, there is no clear plan to settle a human village in Asgardia’s space kingdom. But at time emphasis is on this to register a number of different people in for this project So that as a “country”, Asgardia can be given a membership of the UN.