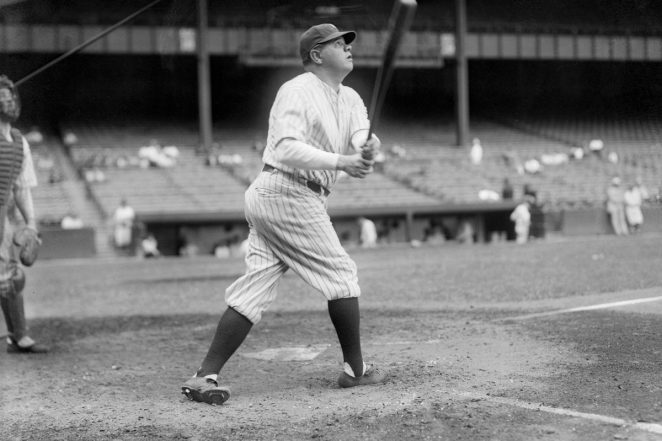 Cleaning up my PC I came across an article I once wrote about Babe Ruth. I am not a sports fan but I have watched some baseball games and thought it might be interesting to write about some of the sport’s greats like Babe Ruth.

There are true baseball fans who include Babe Ruth when they talk about things like as American as apple pie. Babe Ruth hit his 714th home run on May 25, 1935, in Pittsburgh, Pennsylvania. This was one of his last baseball games and the last home run of his long and exciting career.

Babe Ruth came into this world as George Herman Ruth on February 6, 1895. He was a hard to raise and troublesome boy so his parents sent him to an orphanage at the age of seven. He lived at St. Mary’s Industrial School for Boys until he reached the age of 19 in 1914. At this time he was signed on as a pitcher for the Baltimore Orioles. During the summer Ruth was sold to the Boston Red Sox. It was then that he received his nickname “Babe”. Right away he was recognized as the best pitcher. Babe Ruth set a record between 1916 and 1918 with 29 2/3 consecutive scoreless innings in World Series play. This included a 14-inning game in 1916 in which Ruth pitched every inning and gave up only a run in the first. Considering he came from an orphanage you’ve got to say that God gave him an incredible talent.

Boston fans were disappointed when Babe Ruth was sold to the New York Yankees before the 1920 season started. With the Yankees, he switched to the outfield and wound up hitting more home runs than the entire Red Sox baseball team in 10 of the next 12 seasons. He had acquired two titles “The Sultan of Swat” and “The Bambino”. He was a phenomenon and everyone who knew anything about baseball spoke about Babe Ruth. During his incredible baseball career, the New York Yankees won four World Series and seven American League pennants. Once the Red Sox had sold Babe Ruth to the Yankees they had a dry spell of 85 years and didn’t win a World Series until 2004. Red Sox Fans call this “The Curse of the Bambino”.