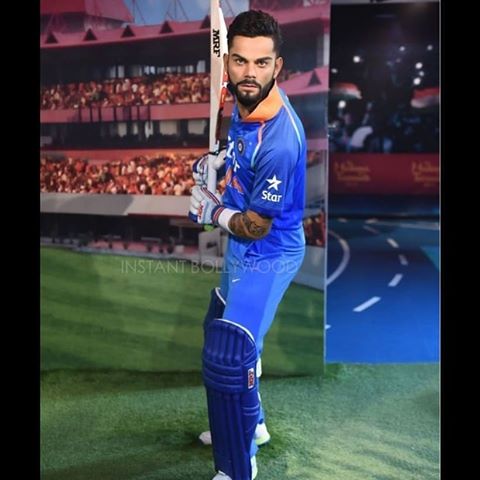 Forbes had released a list of the world’s 100 most celebrities in the world of sports a few days ago, in which Virat’s name was also encompassed. Virat was ranked 11th in that list and eventually he was to the fore of the mammoth names of the game, such as Novak Djokovic, Serena Williams.

Virat Kohli’s wax image also was unveiled on last Wednesday at Madame Tussauds Museum in the national Capital of India. The prestigious Forbes Magazine has released a list of the world’s 100 highest-paid athletes, in which only one cricketer is named who is non other than Virat Kohli, the heart-throb of Millions.

In the year 2017-18, Virat’s total gross earning was $ 24 million that is nearly Rs 1.6 billion. In this list, America’s boxing sensation Floyd Mayweather is on the top. Current year’s earnings of Virat has been pegged at $ 285 million that is around Rs 19.05 billion. Mayweather pushed Cristiano Ronaldo back to list on the first place. Ronaldo has reached third place this time.

This is the second consecutive year when Virat has made his place on the Forbes list. Last year, he was 89th in this list and this time he has improved six steps ahead in the said list. His earnings last year was $ 22 million. MS Dhoni and Sachin Tendulkar have also made the place in this list of high-paid athletes before him.In the 2013 list, these two cricket giants made the place together.  While Dhoni was at number 13 in the list, Tendulkar was at 51st position.

Salary’s share in this earning was just $ 4 million, while earning $ 20 million from endorsement. If only the list of earnings from the endorsement shall be prepared, Virat will absolutely be ranked in the 15th position. Virat slipped into the 95th position when list was prepared on the basis of Salary share.