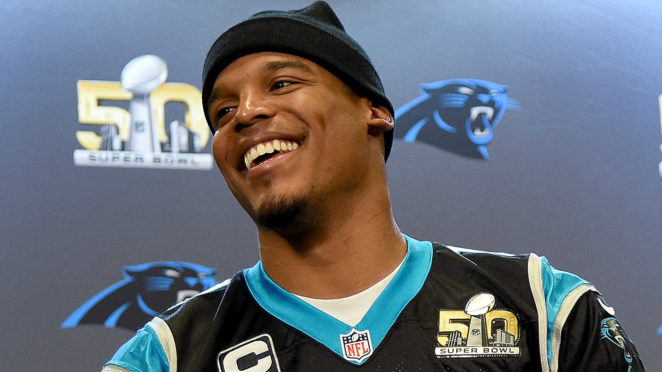 The $64,000 dollar question coming from me is why is Carolina Panthers starting quarterback “Superman” Cam Newton being painted as a Joker for his ahem insensitive remark about Carolina Panthers beat reporter Jordan Rodrigue when during a press conference this week when Rodrigue asked Newton about pass routes to his wide receiver Devin Funchess a during football game.

Newton made the error of telling Rodrigue that is “funny” that a female reporter asked him a question about his wide receiver running a pass route during a football game since there are a few female reporters that cover the National Football League (NFL). Ms. Rordigue found the remark offensive to women in general.

In my opinion the media is blowing the politically incorrect words of Cam Newton since the National Football League  target fan base is women out of proportion. If I was Ms. Rodrigue I would have laughed at Cam’s attempts to be funny since that is his personality playing the game he loves. But then again I have been labeled the Joker by my rivals on the internet.

I can understand if Newton used call the female reporter a very nasty word or insulted her race but come on Cam Newton is now being painted as a villain by the same media that placed him on the pedestal as a Superman playing football two years ago when the Panthers made it to Super Bowl 50.

Newton under pressure from his coach Ron Rivera did say he was sorry for his insensitive comments about women to Ms. Rodrigue and the women who support the NFL.

My advice to Cam Newton even though I am a closet New Orleans Saints fan is to be true to himself as a human being and try to be careful when answering questions from reporters of the sports media in the near future. You do not want to burn bridges that you have to cross to get to the other side of the river.