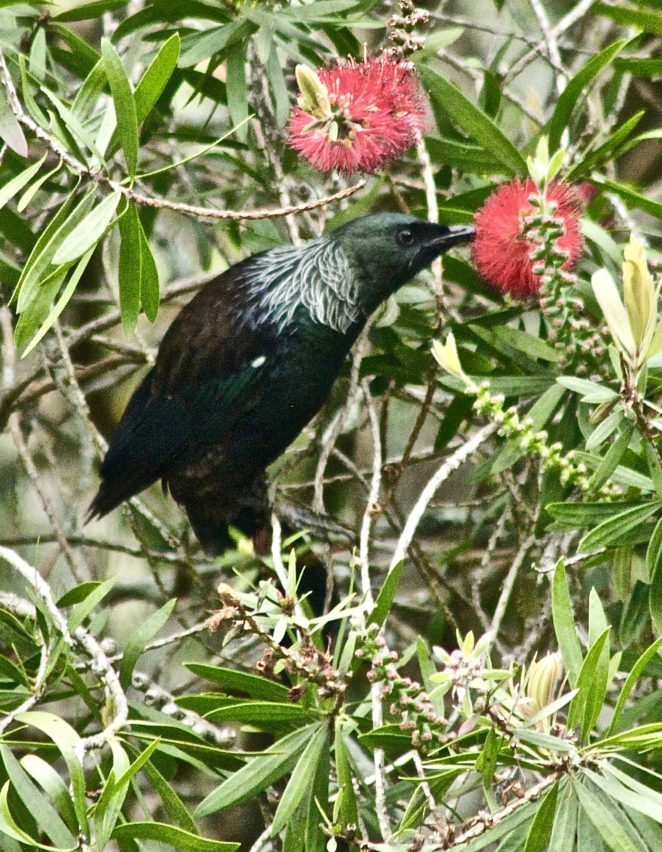 To begin, I will start with the New Zealand Tui. 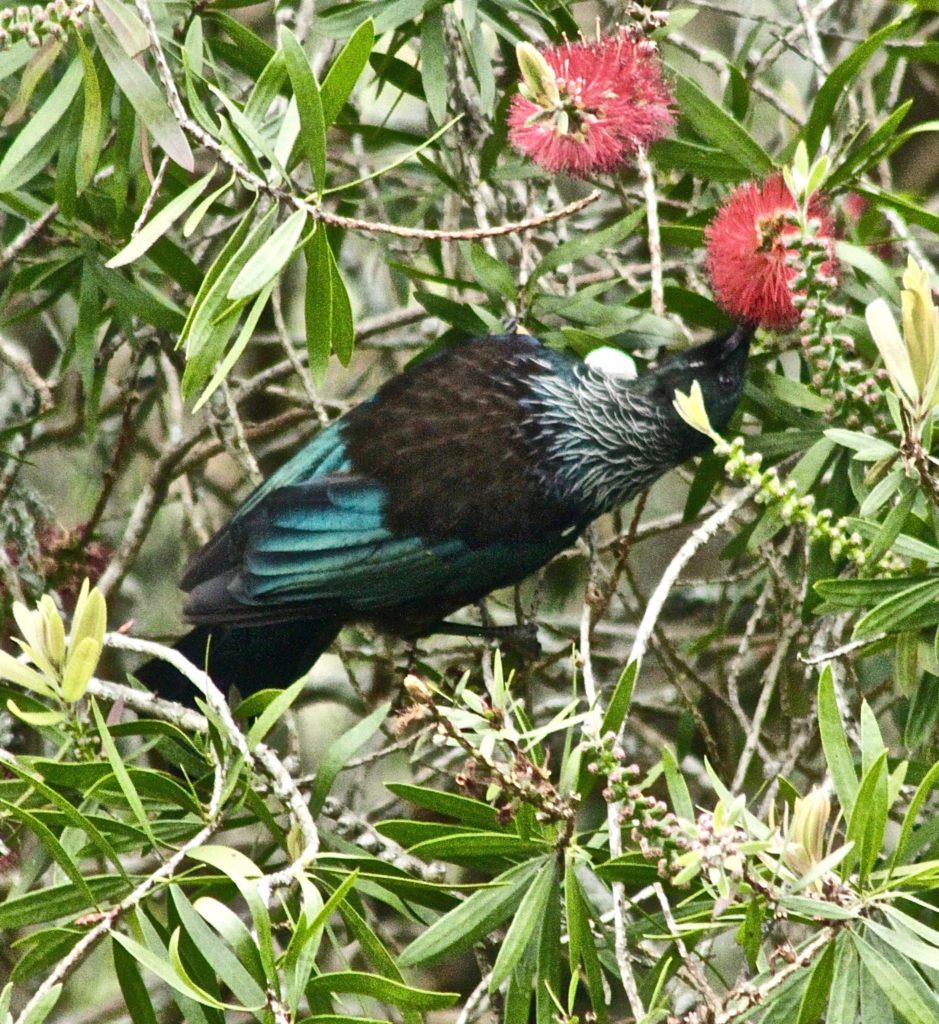 This native bird is seen quite a lot in Auckland city, it is noisy, boisterous and has melodious song. When it flies it sounds like a puffing below. I took the picture of this Tui in Onehunga, on a Bottlebrush tree in a Garden club by a polynesian group. This guy was intent on eating the nectar from the flower.

Now often when we see them they appear to be black, not like the above which shows it’s true colours when the light is shining on them in the right angle. 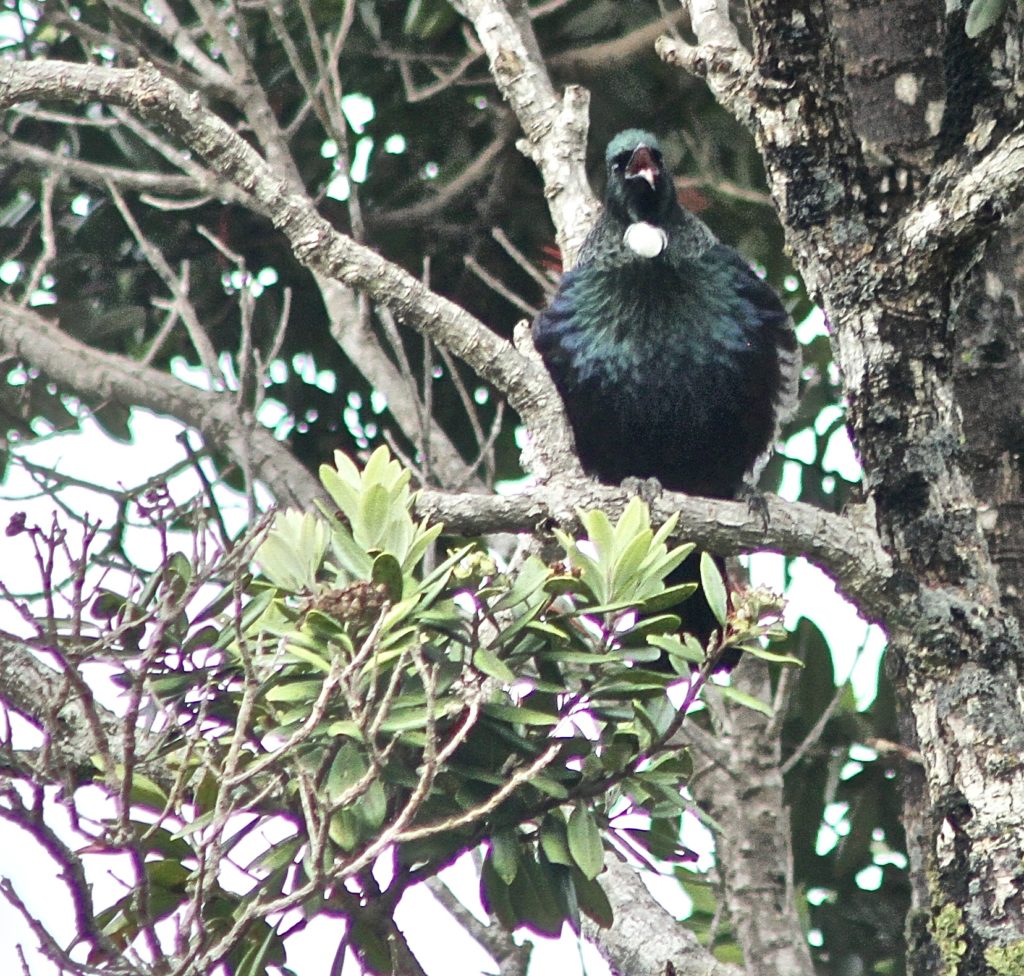 You will know that even though it looks black it’s a definite tug but the white fluff under it’s throat. Often they like you to hear them rather than see them. So as soon as the camera gets focused, the bird has moved again and again. However, with this little Tui, it is so full of it’s song or what it has to say that he says his piece whether I am there with the camera or not.

For the above picture, it was taken outside of “Estuary Arts” a gallery in Orewa, north of Auckland. In the car park there are Pohutakawa trees which the Tuis like very much. 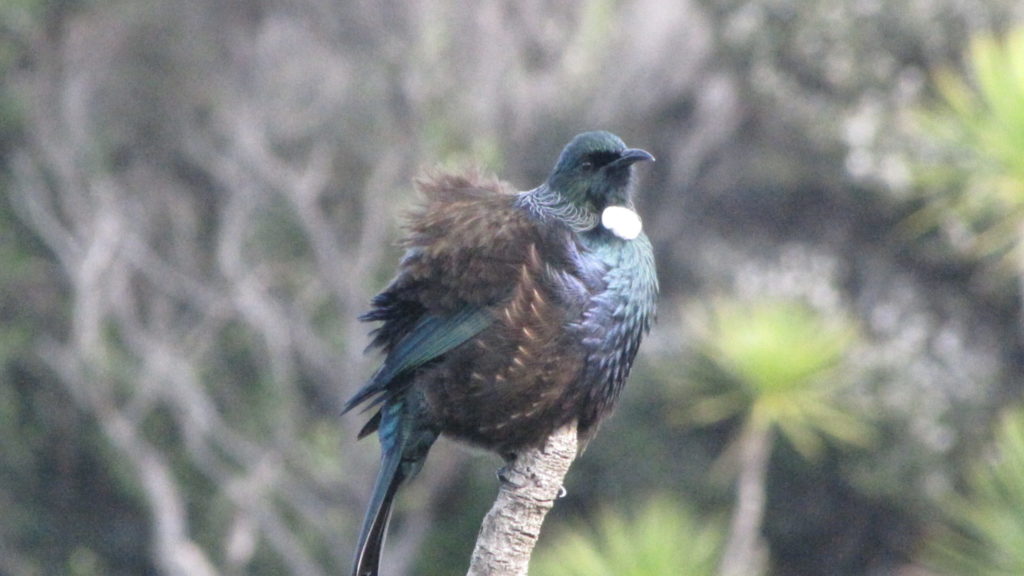 This Tui I saw on Tiritiri Matangi Island in Auckland’s Hauraki gulf. You can see some of it’s colours.

In truth, the feathers of the New Zealand Tui change according to the angle of light on it’s feathers so it is a bird that constantly appears with certain colours, according to the weather or where the Tui is. 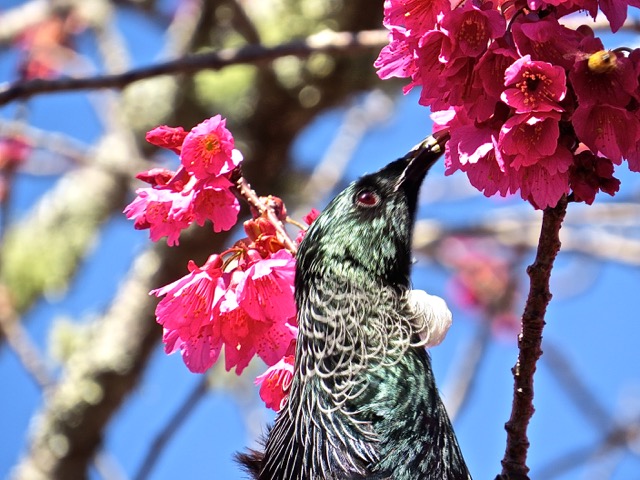 This Tui above is near the grounds of Epsom Garden centre on the side of Mt Eden. The birds love the nectar and the photo was taken in spring. The Tui birds love the pink blossoms for their nectar. They fly about in a boisterous way and seem to play “Musical Chairs” They fly about the trees and push other Tuis out of their perch and play a game amongst themselves.  They sing as they eat. 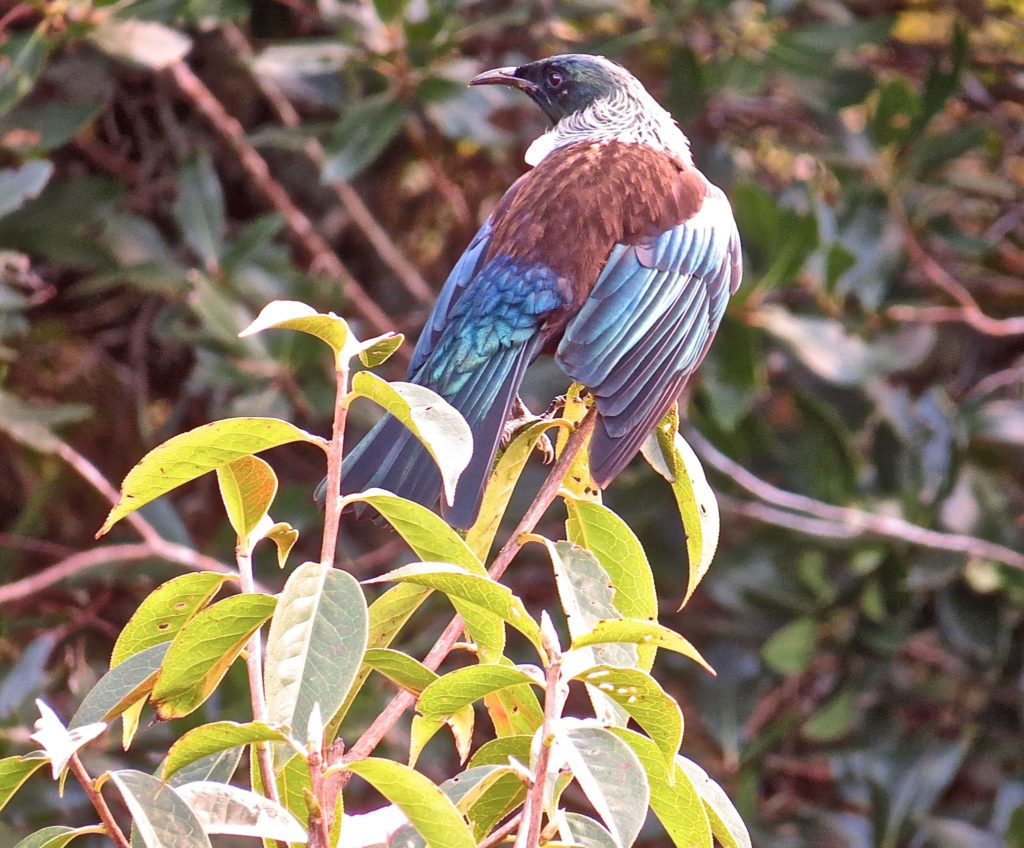 We don’t have a Raven in New Zealand but this Tui, is a Bell bird type. Here this photo was taken on Tiritiri Matangi Island.

Now like the Humming birds, they love nectar and you can feed them honey water. 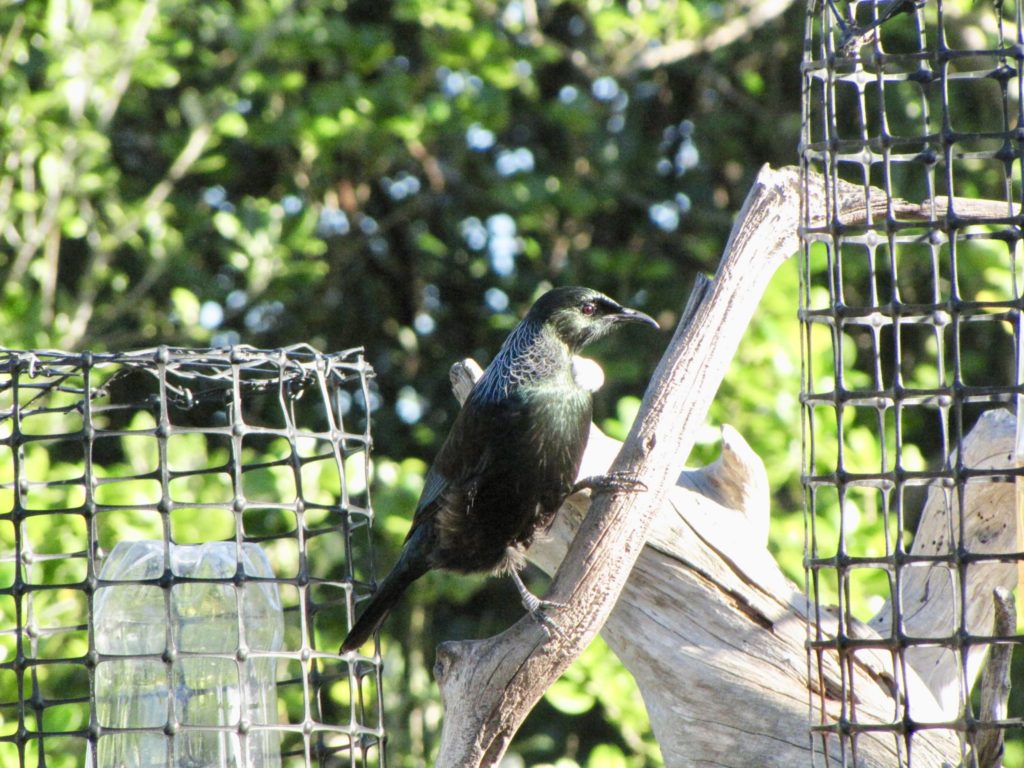 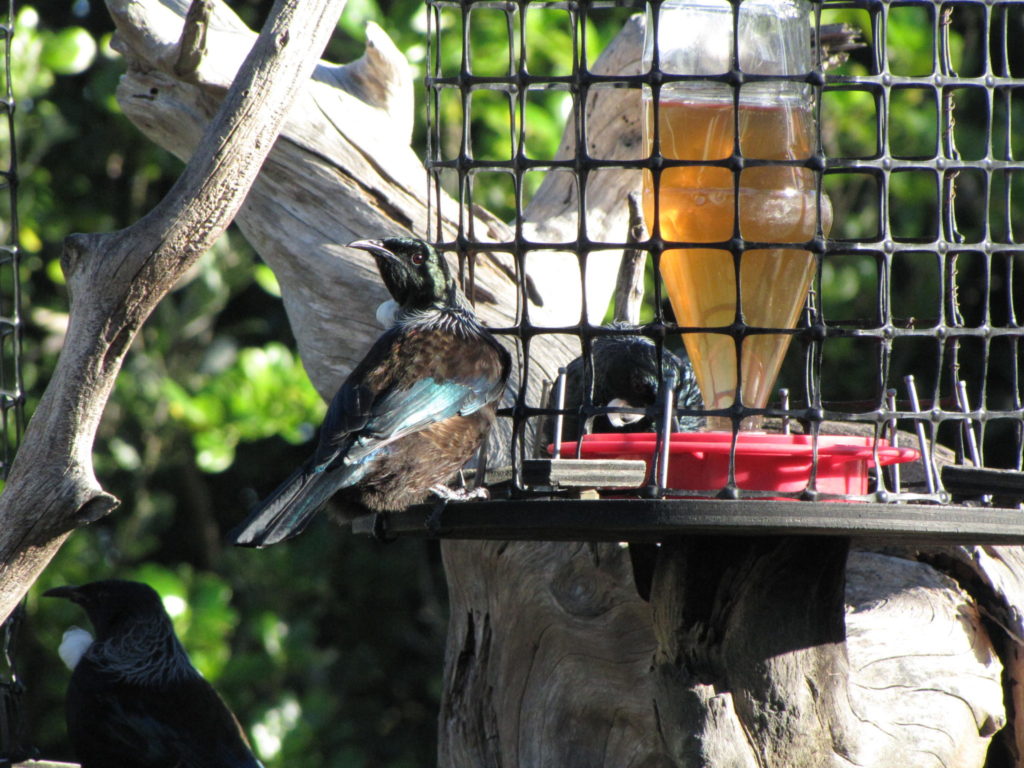 The New Zealand Tui is also known as the Parson bird, because of his white collar.