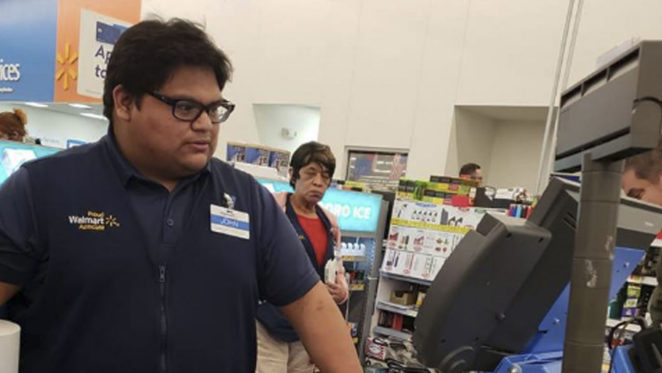 John Lopez Jr. who is 19 yeas of age who earns a living as a cashier at a Wal Mart is an example on how to make a good first impression with customers by acting in a professional and happy person who is happy to serve customers who come to his cashier lane.

John was photographed by Laci Simms who was in the cashier line when the female customer in front of her told John that due to circumstances beyond her control, she could pay the $110 bill for her groceries.

John who credits his parents for teaching him right from wrong, decided that he would pay the bill for the female customer out of his own pocket.

To show what the power of the social media has in terms of a positive sense, John in the words of the late artist Andy Warhol who is famous for his quote that “Everyone will have their 15 minutes of fame.” had his picture in the Facebook pages for his decision to go the extra mile to assist a customer in need.

Since this incident happen on December 17, 2018, the community of Princeton Texas wanted to reward John with a gift from the readers of the internet page GoFundMe.com.

Brandon Weddle was inspired to share the great deed by John, made a plea to raise $1,000 from the GoFundMe.som  so John could enjoy his Christmas holiday, the donations from the persons who were touched by John’s kindness to people in general reached around $31,000 dollars.

John is very thankful that due to his great reputation of treating the customers the way he wants to be treated also known as “The Golden Rule.” will use the financial tips from the community to attend college.