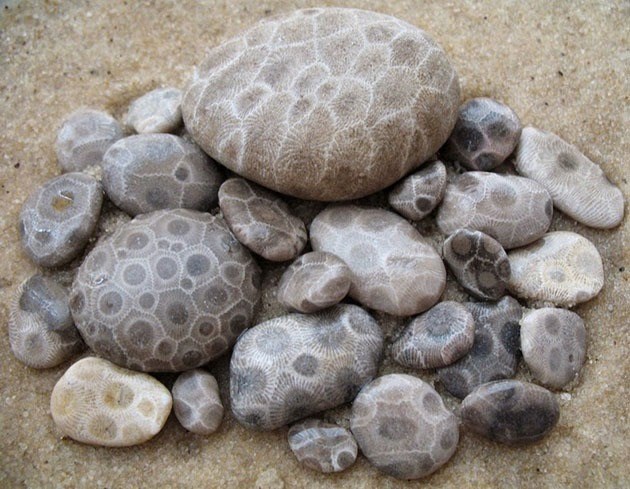 Unusually ‘petoskey’ stones consisting of fossilized Hexagonaria percarinate, types of coral that once covered the soil of present-day Michigan, United States, about 350 million years ago. The stones were created as a result of glaciation, which has led honed rough edges of coral, and are deposited in the north (and some in the northeastern part) peninsula of Michigan. Today, in these same areas can find a whole colony of these fossilized coral. Basically, Petoskey stones are just pieces of coral reefs, which when dry is reminiscent of an ordinary stone, but when wet or polished, it appears the distinctive six-sided pattern of colorful coral fossils. More than 350 million years ago during the Devonian period, Michigan had a completely different landscape: it was covered in warm, shallow, salty sea, they lived in colonies hexagonaria percarinata coral and other marine plants and animals. As the earth’s plates moved forward, both in time and the whole peninsula rose above the sea level. Name ‘petoskey’ originated from the name of the son of chief of the 18th century “Petosegay”, which means “rays of dawn” or “promise of the sun’s rays.