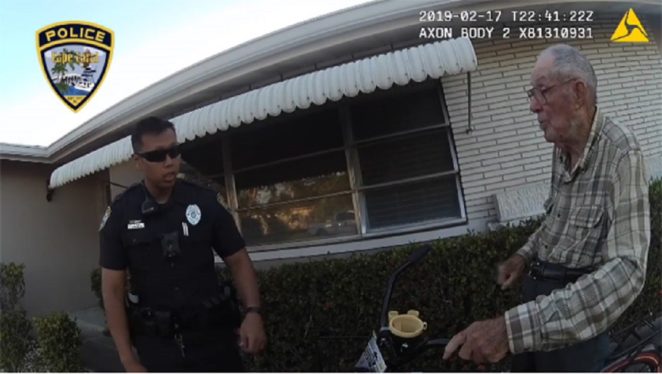 Cape Coral Florida police officers Ken Cody and his partner Guang Song responded to a call that a senior citizen named Robert who uses a bicycle to ride from his home to run an errand for groceries at a local Winn Dixie had the bad luck to have his bicycle stolen after he came out of the supermarket after he made his grocery purchases on the same day.

I am sure that Officers Cody and Guang did file the police report of the stolen bicycle to their superiors at the Cape Coral Police Department. Normally after this incident, the two police officers could have told Robert that they are working on the case to retrieve his stolen bicycle.

However, both Officers Cody and Guang decided to go the extra mile in making Robert a very happy man by visiting a local Wal Mart and paying out of their own salaries a new bicycle for Robert to replace the bicycle that he lost earlier.

Robert was in his home when both police officers came to his home to present him with a brand new bicycle to replace the one that was stolen at the local Winn Dixie since it most likely did not have a lock and key to prevent the robbery.

The two police officers were able to adjust the seat so Robert can sit on the seat of the bicycle comfortably. Robert was also given a new lock and key so his new bicycle will not be stolen when he goes on the town to run his errands since driving an automobile at his late stage in life is out of the question.

It is nice to see police officers assisting the people in their communities when they need their assistance these days.