If you have not heard about them before you’re probably wondering what are the Wisconsin Dells. Well. they are impressive rock formations located by the Wisconsin River in the U.S. state of Wisconsin. These formations were shaped by the river’s strong currents that were a result of melting glaciers. 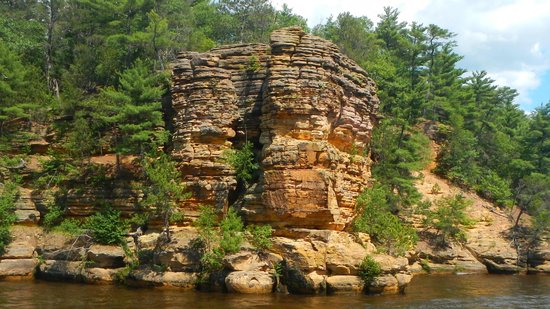 This area certainly looked a lot different about 500 million years ago and it used to be covered by shallow seas. The seas flowed for about 80 million years over the land in this area and left behind sand on the bottom of the sea. As the years went on the sand kept building up until it had risen about the seas.

The resulting huge sand formations became the tall sandstone cliffs that can be seen today in the Wisconsin Dells. These types of formations can only be seen in three other areas in the world – Germany, Switzerland, and parts of New York State.

The Wisconsin Dells were named from the French term “dalles” meaning “slab-like rock.” The more distinctive rock formations in this area have been named according to what they resemble like Chimney Rock. These formations became a popular tourist attraction in the 1800s and today people still enjoy traveling to Wisconsin to see them.