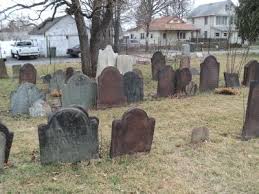 The Piscatawaytown Burial Ground is one of the oldest graveyards in New Jersey. It is located in Edison. The cemetery has a rich Revolutionary War history. The oldest tombstone here is the resting place of two brothers who died after eating poisonous mushrooms in 1693.

Mary Moore, a local woman was laid to rest here in 1731. She was thought to be a witch because she would grow strange plants in her yard, made animals do odd things, and dressed very unusually. She could have been many things one of them, eccentric. So it is said that if someone walks around her grave three times at night and spits then her spirit will appear. That could be good for someone who is curious enough to find out if she really was a witch.

The only problem is that the grave is hard to find. A long time ago two boys stole her tombstone. Then the witch cursed them and they died. The tombstone supposedly was smashed to pieces or fell into a sewer. I know the dates don’t match but it almost seems that those two boys could have been the ones who died of the poisonous mushrooms. I wonder if someone is just telling tales.