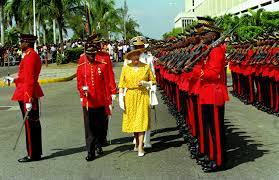 In the 1970s, leaving the Commonwealth, removing the British Monarch as Head of State was on the agenda.

This was not done as it was felt an insult to Queen Elizabeth whom we respected.

There was no scandal, no dropping of standards, and her visits to Jamaica were always full of love and excitement.

Her heir, Charles, was fairly despised.

When he married Diana we liked her and that reflected on him.   When Diana died we felt the grief.  As time passed and we learned many ‘secrets’  we despised him even more.

To have married her as a child producer while continuing his affair with the ‘Rottweiler’  so obviously proved our rejection of him had reason.

We wanted to leave the Commonwealth in the 2000s, but would wait until the Queen died.

Now that she has departed, we want nothing to do with Charles and will be preparing our departure.