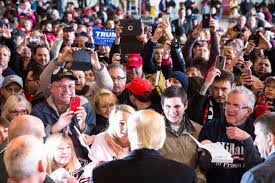 There are those, behind closed doors, who actually know what is and is not.  There are those in the hallways who will get some carefully sifted information.  Then, there are the lumpen.  They know absolutely nothing at all whatsoever and have to wait until their ‘Massa’ sends them their opinion.

I was involved in politics for many years.  I was behind closed doors.  So I knew the facts, I was part of the decision as to how to ‘sift’ those facts.

I had friends who were lumpen.  The y knew nothing but talked louder and with more authority than anyone.

As what I knew was confidential I never corrected them.  I let them shout and bluster and go on and on, making fools of themselves.

In America the same ‘paradigm’ exists.  The lumpen makes up the most noise, and in America, they are used as cannon fodder.  They are sent on ‘missions’  with hope they get killed and become martyrs.  That their Massa wouldn’t let them on his property, would want them in ten feet of him, is never noticed.

The rest of the world notices.

As many leaders have self respect, they wouldn’t like to be surrounded by bottom barrel buffoons.  In other parts of the world, save those with dictators, the kind of mindless  followers are abhorrent.

The discussions in other parts of the world concern whether there are enough sensible members of the Republican Party to return to a semblance of respectability, of if the standard are those ‘insurrectionists’ who stormed their own Capital..