Muhammad Amir will not be part of the side that takes on Australia in two Test matches next month. The 26-year-old, who has missed just one Test since his comeback to international cricket in 2016, appears to have paid the price for his poor ODI form in the recent Asia Cup, resulting in his exclusion from the 17-member squad named by the PCB today.

He went wicketless in the last five ODIs he played and has picked up just three ODI wickets since the Champions Trophy final last year at an average in excess of 100. He was impressive in the three Tests Pakistan played this year – one against Ireland and two against England – where he took 12 wickets at an average of 18.40. His bowling average in the UAE, however, is far less flattering, albeit over a small sample size; in four Tests at Pakistan’s adopted home, he has taken seven wickets at 56.42.

There are a number of other notable changes to the Pakistan squad, announced the day after an ignominious exit from the Asia Cup at Bangladesh’s hands, which denied them a shot at the title against India on Friday. Their overall performance in the tournament was well below par. Several batsmen struggled for runs, while spinners were largely ineffective, and Pakistan’s fielding standards suffered a significant dip.

Shan Masood, a Test specialist until now, was included in the Asia Cup squad, but didn’t get to make his debut. He finds himself left out of the Test side now, with Azhar Ali, Fakhar Zaman and Imam-ul-Haq designated to share opening duties. Haris Sohail keeps his place in the Test side, while Usman Salahuddin, who travelled to England but played just the one game, is also part of the squad. 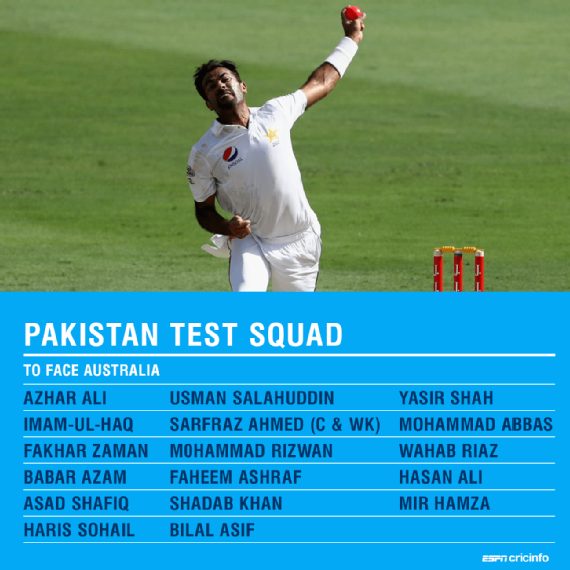 A key inclusion, for the first time in over a year, is that of reserve wicketkeeper Mohammad Rizwan. Since Sarfraz Ahmed took over full-time captaincy duties in all three formats, he has played every international game in all three formats, and been the only travelling wicketkeeper with the side. That changes as Pakistan gear up to face Australia in the wake of intense scrutiny over the part Sarfraz’s captaincy played in Pakistan’s exit from the Asia Cup, and his personal form with the bat.

Wahab Riaz, left out rather dramatically from the tour to the UK after questions over his fitness, is back in the line-up, as are a raft of spinners, indicative of the likely nature of the pitches the two Tests will be played on. Pakistan might not have named a single spinner in the A side that will face Australia in a four-day game, but no less than three specialist spinners form part of the Test squad. In addition to the usual suspects Yasir Shah and Shadab Khan, the 33-year-old offspinner Bilal Asif has been included, and would make his Test debut if he plays a part in the series. Asif previously played three ODIs for Pakistan in 2015.

There continues to be no place in the side for Mohammad hafeez dropped for the Asia Cup in the wake of continuous problems with his bowling action which limited his reliability as an all-round option. Even though he was recently cleared by the ICC after being reported for the third time, there is a sense Pakistan are looking to move on from the 37-year-old, who last played a Test match in 2016.

The 26-year-old left-arm medium-pacer Mir Hamza is there in the squad. In 56 first-class games, Hamza has picked up 278 wickets at an average of 17.74, and has 26 five-wicket hauls to his name.