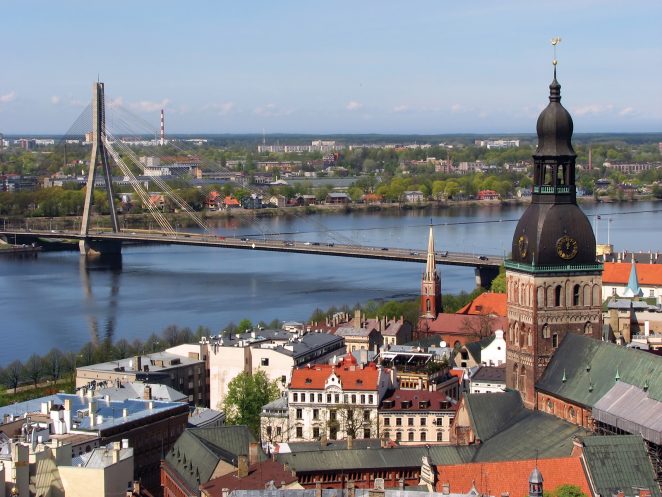 The lovely lady is the capital of Latvia Riga. She is a grand, grey-haired lady divided by the Daugava River. The city is found on the right bank and the suburbs or Pardaugava (loosely translated “across the Daugava” is on the left bank. Riga dates back from 1201 A.D. This date is in question because there are those who say Riga is older.

In 2001 Riga celebrated her 800th birthday. Scholars say that Riga was founded sometime before 1198 on the shores of Lake Riga where there were some villages settled by Livs (also called Livonians who were the inhabitants of Livonia, a large part of what today is northwestern Latvia and southwestern Estonia) and German trader camps. It is believed that these settlements were rather large since chronicler Henricus de Lettis (in the early part of the 13th century) referred to them as towns.

The origins of the name Riga are thought to come from the Baltic word “ring” which signifies a winding river. The city itself was built on a site with a natural harbor. This was good for traders as they could travel upstream on the Daugava to what is now Russia and from there perhaps on to the Orient. Reaching the Baltic Sea traders could make their way to Gotland, Scandinavia and Western Europe.