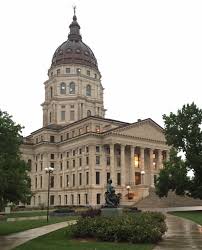 In the days of Old West of Kansas City, Missouri, three half Kansas Indian sisters married to French-Canadian Pappan brothers established a ferry service that made it possible for travelers to cross the Kansas River into the area which today is the capital of Kansas, Topeka.

In the 1850s there was a lot of traffic along the Oregon Trail and this was supplemented by trade on a new military road that went from Fort Leavenworth through Topeka and on to Fort Riley. Soon there were steamboats docking regularly at the Topeka Landing. By the 1860s the city had become a commercial hub.

After a decade of abolitionist and pro-slavery conflicts, the territory became known as Bleeding Kansas. After the state was admitted to the Union in 1861 as the 34th state Topeka became the capital. It took 37 years to build the capitol building using Kansas limestone. Topeka was headquarters in the operation of the Lane Trail to Freedom on the Underground Railway which was the chief slave escape passage and free trade road.

Today visitors come to Topeka to see the neo-Classical State Capitol, The Kansas Museum of History, the Old Prairie Town and the botanical garden among other attractions.