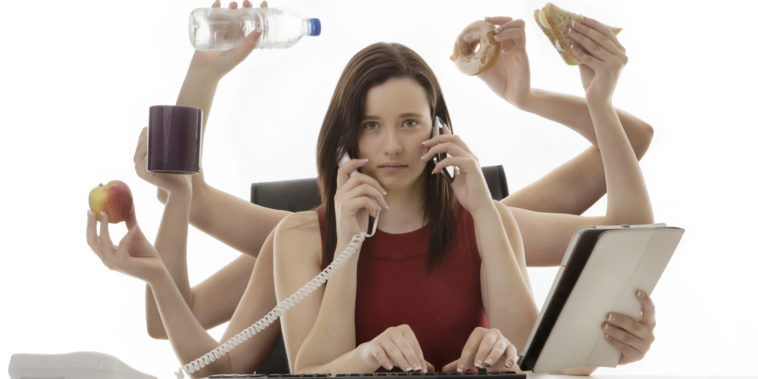 Although it might seem strange to say it, there are those who are incapable of doing more than one thing.

We  joke that someone is so dumb they can’t walk and chew gum at the same time.  But there are people who can not talk on the phone and see the person standing in front of them.

Today, most of us almost always multi-task. It seems normal for us to be ‘scattered’ as most things don’t require our full attention.  We can watch television, cook dinner, and talk on the phone.

Sure, as long as we aren’t chopping vegetables with a sharp knife, or having an important conversation, or needing to get that information from the television, it’s okay.

But there are people who really can’t multitask.

Where we can have five or more screens open on our computer, talk on the phone, be conscious of those around us, while aware it has begun to rain and our need to close the window.

I have seen people  who can not operate a computer and talk at the same time.  If they are on the phone they become blind to everyone and thing around them.

Long before computers there were workers who had to focus on the file in front of them. If the phone rang, they had extreme difficulty in disconnecting from the file.

There have always been people who can not work under any pressure. If called by two people at the same time, they go into pause mode.

Dealing with people who can’t multi-task forces us to slow down our own pace, and makes us extremely uncomfortable because it forces our brains to grind to a halt.

To deal with people who can’t multi-task is only acceptable in writing.  Putting the information in writing means that we get our thoughts out, and the slow brain will have time to read it, think about, find answers, and then get back to us.

Meanwhile, we are doing other things, not waiting.

multitaskingone thing at a time