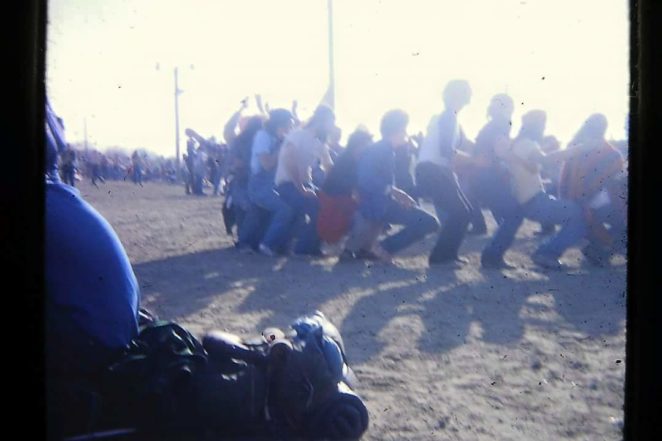 For three years the Clamshell Alliance had united many diverse people of different backgrounds & ideologies around one common objective: to confront the atomic power industry and non violently stop the construction of the Seabrook Nuclear Power Station.

In the Spring of 1978 that unity was threatened by a deal reached by N.H seacoast activists & state authorities to cancel a planned site occupation and instead permit a 3 day Alternative Energy Fair/Anti nuclear rally. The repercussions of that deal would drive a wedge between the Boston Clamshell Alliance activists and most of the New Hampshire, Maine, & Massachusetts North Shore affinity groups. When I was hired as Blockade Project Coordinator in the fall of 1978, I would find trying to get folks to work together challenging- it seems everyone had baggage from the last occupation.

In June a faction of Boston Clamshell proposed a “direct action” occupation of the Seabrook site based on the successful model used by European activists in shutting down a German reactor in Whyl. They calked for nonviolent direct action that was similar to previous actions except for one fundamental difference- the Boston faction wanted to stress that people were more important than property. They advocated using wire cutters to take down the fences around the site. The Seacoast New Hampshire Clam activists knew that whatever the intent local authorities would perceive fence cutting as am aggressive act and would respond with repression. No consensus could be reached After hours of endless debate the Clamshell Alliance split….an occupation was scheduled for October 6,1979. I left Amesbury that night with an anxious feeling that we were screwed.