Before moving on, let me tell you that I am not an extremist Muslim by nature. However, being a Muslim woman traveler I certainly have some reservations regarding my dress code. I would call myself as ‘Dora the Explorer’ as I haven’t left any place to feast my eyes and soothe my soul. Being a Muslim travel geek I mostly have fantabulous summers having halal holidays at laid-back beaches of Agadir. Indeed, East African Morocco is among the Best Places for Muslims to Visit to form a memorable travel memory.

Dressing- A Matter of Personal Choice

I have always abhorred the particular scourge of Western Womanhood for their ever-present trend of sunbathing with their Bikinis. I am not against beachy days or Bikini straps of women. Because what women want to wear is their personal choice and will. My Western buddies do enjoy sunbathe in Bikinis as they are comfortable with it. But I work on not feeling the burn. Often I wear a T-Shirt over my bathing suit at my beach trip.

Bikini A Symbol of Freedom and Sexual Liberation

In the West, the Bikini for women is regarded as the symbol of freedom and sexual liberation. The Bikini woman is looked up to as upright and prudent. I am used to the popular typical interrogation of my English buddies “You’d look amazing in Bikini, why don’t wear one? But my answer is strict “NO”.

Islam- A Doctrine of Modesty for Women

Well, I didn’t grow up in a staunchly Islamic household but I have fairly absorbed the Islamic ideals on modesty. Moreover, apart from the religious ideals, I don’t assume myself comfy in this teeny-weeny outfit. And certainly, like any other woman, it is my right to wear what I want. I am not in a stance to celebrate the female body and objectify it for pleasure-seeking.

Islam is the doctrine of modesty. Modesty in Arabic means Haya. Even in this matter, I prefer a middle ground. Because I have read somewhere that the Islamic teachings aim at “transforming the outer layer of oneself into an expression of what is inside”. An entire sense of inner satisfaction is what matters than an outward flaunting of the body.

Muslim Women can have joyous Jaunt at Soothing Sandy Beaches 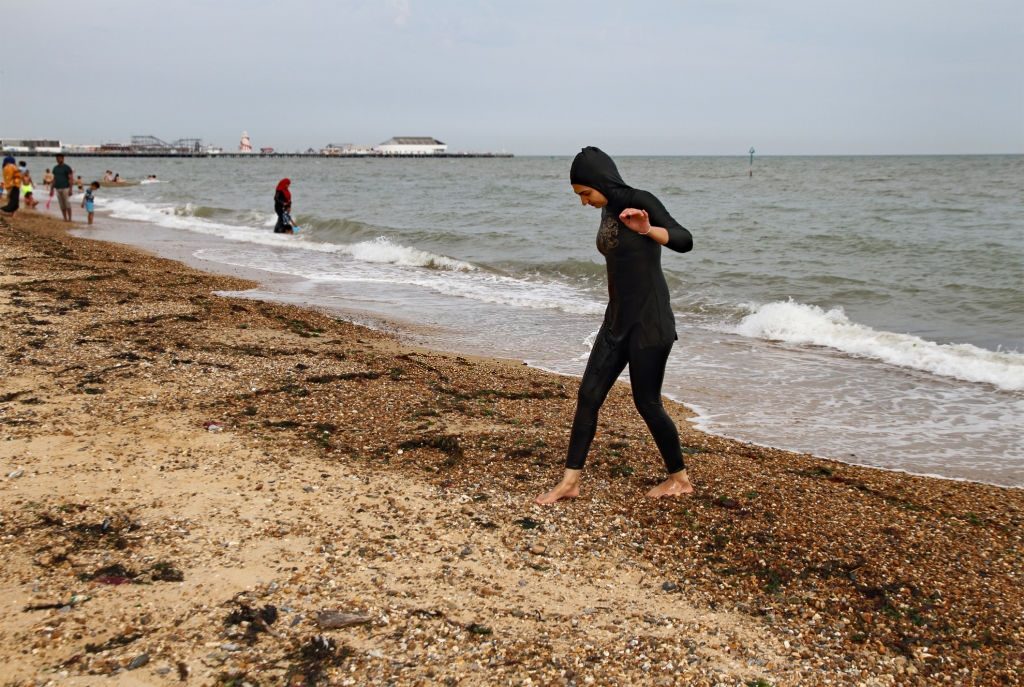 This masculine Muslim world is seen to have strict reservations for beach tours with their females under the cover of modesty. However, following the not -so -strict middle-ground for the lifestyle I opine that Muslim women can have exuberant beach trips, particularly at the Muslim-Friendly Halal Holiday destinations.

Roam in Burkini, not in Bikini

I admire a Muslim blogger’s remarks “It’s not every women’s ambition to rock a bikini” Moreover, traveling is our part of life, not a restricted activity. There must be no shyness in a modest globe-trotting even in the non-Muslim world. Still want to Swim Not wanna wear a Bikini? Yes, it’s possible. There are modestly covered Swimsuits are available all over the world for the Muslim women globetrotters. These swimming suits would not let you compromise between your commitment to your faith and desire for the public water activities. These cozy swimsuits are Burkini.

It is a modest and colorful Islamic swimming suit. It covers your whole body except your face, hands and feet. It makes your limb movements easy and is enough for swimming. This Islamic traditional dress was first designed in Australia by an Australian Muslim named Aheda Zanetti. It is the best Muslim-Friendly swimwear for all the Muslim women travelers across the globe.

You can have quality Burkinis from the Popular Fashion Brands

To cater to the modest Muslim water activities, the well-known Clothing brands have chosen to specialize in this niche market too. The Turkish brand designer Mayovera has launched modest swimwear in 2015 with leopard patterns.

These swimsuits can easily be donned for beachy activities of the Muslim women travelers. An Italian Brand named Munamar (“Muna” is Arabic for desire and “mer” is French for sea) has launched the ready-to-wear Burkinis for Muslim women tourists. The British brand Speedo launched its Delight Full Body Suit that is a range of leggings and long rash guards suitable for the surfers.

Burkini Is Not meant for Religious purposes Alone

Burkini is not meant for religious purposes alone, there are some other significant benefits of this Muslim women-friendly swimsuit. This swimsuit protects the skin from excessive exposure in the sun. This swimsuit has attracted many non-Muslim women as well who are protective of their skin color. The non-models wear it to get UV protection from the sun. The British television star Nigella Lawson and Hollywood’s Lindsay Lohan are two famous faces who have chosen Burkini to cover their skins as a unique fashion symbol.

So wear Burkini and feel free in frolicking beachy holidays.