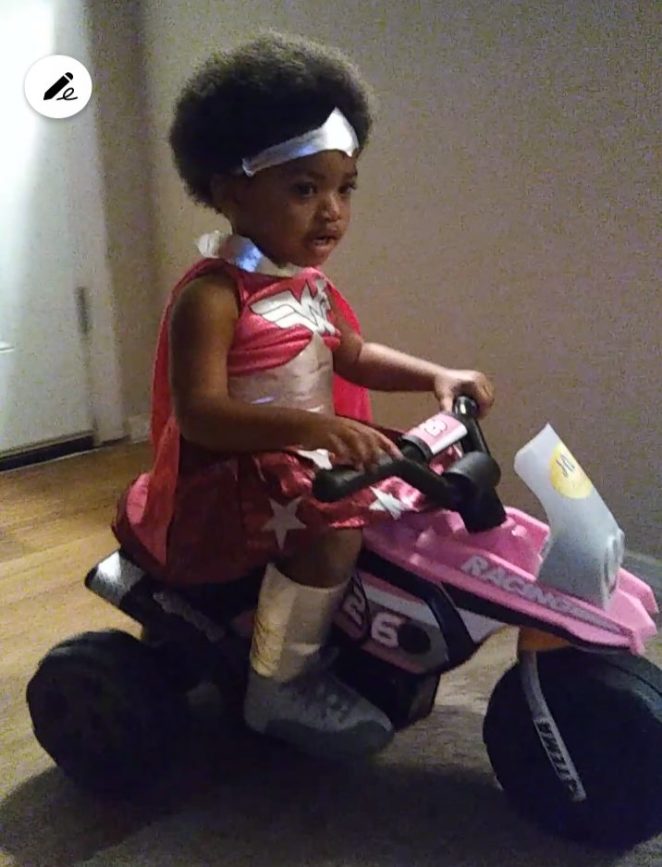 So we have a lot of glow sticks left over from Halloween. And I don’t mind my daughter playing with them, but I want her to save some for a future movie night.

She comes and hands me some glow sticks to open for her, but it’s like 9am. (I’m guessing she needed them so she could imitate Robin from Teen Titans)

So I tell her, “Mama you have to wait until it’s dark outside so you can really have fun with your glow sticks.”

She wasn’t happy with that answer at all.

Next thing you know she caught me with a quick combo and took off running.

As I sit in shock, I hear her little footsteps heading back for me SLOWLY. When I can finally see her, she has old glow sticks in her hands like she’s ready for war.

We then locked eyes and just stared at each other for like a minute but it felt much longer. She then grabbed my index finger and guided me to where she wanted me to be.

She sits me down in the living room, drags her motorcycle to me and parks it. (I’m guessing she wants me to add glow sticks to her ride like on Halloween.)

Next, she heads over to get her lion. We make eye contact again and she is dragging this lion to come eat me up.(When you’re a parent you just know these things.) So I do what anyone would do when caught up in this situation, beg for mercy! I shout, “No! Not the lion, anything but the lion!” She stopped dead in her tracks, and sprinted into her room.

I then hear those same little footsteps headed back towards me again, I start to wonder what do she have now? Her snake? Her Ice Bear? What now!?

When I seen her I knew I had to make a choice. She had a jump rope in one hand (Only God knows what that was for.) and the glow sticks from earlier in the other.

Well now she’s watching The Incredibles II and practicing creating knots, while I’m working on her motorcycle like im Alfred. Oh and I forgot to mention, she made me put her in her costume from Halloween this morning as well.

I hope this short story brought laughter to your day.