Or, to be more accurate, love is at least three roast potatoes. Four would be fine.

I suppose one could also say that greater love hath no married woman than this – that she abandon the habit of a lifetime to take note of her husband’s unsubtle hints as regards what ends up on his plate at Christmas dinner.

I can see that this might need a word or two of explanation.

One thing I have learned during more than thirty years of marriage – and I hasten to add that it is not the only thing – is that culinary habits are acquired down the female line and, once acquired, they are extremely difficult to shift.

This was made very clear to me during a family occasion a few weeks ago. My wife (Sue) has a female cousin (Carly) whom she meets only rarely. They are the daughters of two sisters, both of whom have now died, and the occasion in question was the funeral of one of those sisters.

It had been agreed that everyone would bring something for the buffet lunch to be served after the funeral, and it so happened that both Sue and Carly supplied a home-made ginger cake as their contribution.

It was impossible to tell the difference between the two cakes, both of which had been made according to the family recipe that had been handed down from the two bakers’ mutual grandmother via the two intermediate sisters. Neither Sue nor Carly needed to consult a written recipe when making their cakes – it all just happened the way that the family had always made their ginger cakes over a period of getting on for a century or possibly longer. 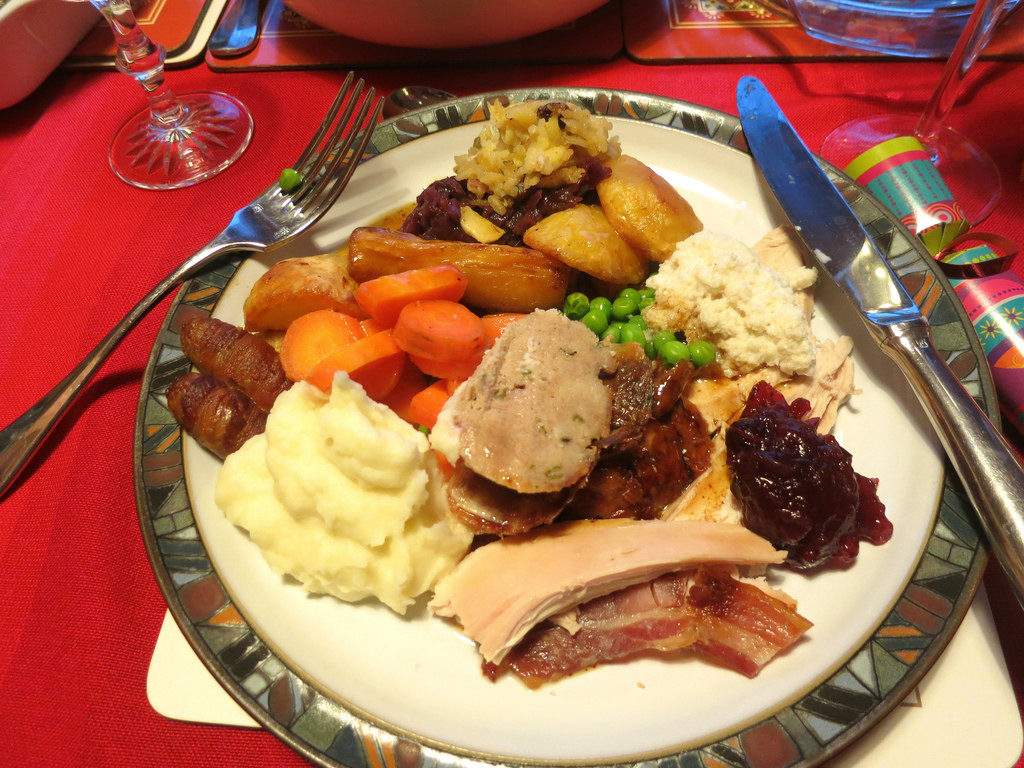 The fact is that what families do for Christmas dinner tends to be according to similarly ingrained habits that go back many years, and my contention is that such habits are like recipes for ginger cake in that they go down the female line.

In my case the pattern has been broken in quite a serious way, in that I don’t eat turkey and cannot stand bread sauce or sage and onion stuffing. My Christmas dinner therefore consists of a nut roast and assorted vegetables, and has done so on at least thirty occasions to date.

However, when it comes to potatoes, Sue’s family diverged from the usual pattern many years ago and refused to bother with them. Instead, they warmed crisps in the oven and served these as a potato substitute. The tradition, not surprisingly, has dropped down a generation and it has always been crisps instead of spuds every year since I married Sue.

But this year I just happened to let slip that I was really fond of roast potatoes. I don’t remember exactly what I said, but it might have been something like:

“There’s nothing better than a roast potato”.

Or perhaps it was:

“If you were to ask me what my favourite way of cooking potatoes is, I would have to say ‘roasting them’”.

“When did we last have roast potatoes?”

Come to think of it, it may well have been all three, and possibly a few more just for luck.

These comments would have been made a few days before Christmas, so they were clearly in Sue’s mind when it came to doing the food shopping, including the usually necessary crisps.

She just came out with it:

“So would you prefer roast potatoes to crisps this year?”

To which I naturally said: “Yes”.

One possible reply to that might have been: “Well you can jolly well do them yourself, then!”

But that wasn’t Sue’s reply. Instead, she just ordered extra potatoes and they were duly roasted for Christmas dinner.

I knew it already, but this only confirmed my conviction that I made the right choice 30-odd years ago when I said “Will you marry me?”and she said “You what?” but did so anyway.

As I said in my title, love – apart from many other things – is a roast potato.

But Sue still had crisps for her own Christmas dinner.