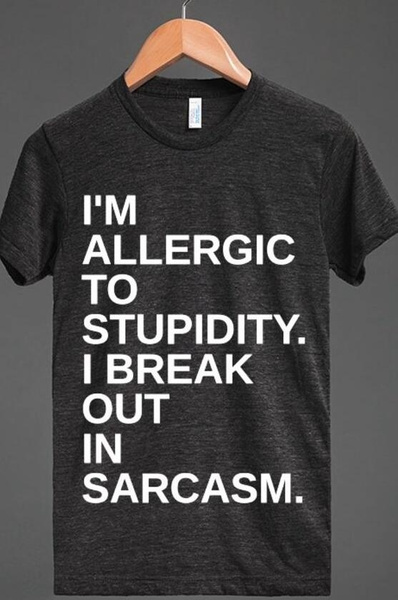 Around noon, I drove to South Coast Plaza to buy the new ASICs sneakers. Last week, the salesman told me that there will be a sale on the 28th. So, I decided to wait. When I entered Nordstrom, I ran into the salesman, but he said they were sold out. That was fast. He said he could order it but I have to pay now. I decided to keep checking at Nordstrom Rack. Maybe they will bring in a new shipment next month.

I walked around. I ended up buying other stuff from Macys and Saks 5th OFF. My early birthday presents, which is actually next month. I will be celebrating 57 years of surviving bullshit.

As I walked out of the Nordstrom restroom, a man’s t-shirt made me smile. It was my motto. “I’M ALLERGIC TO STUPIDITY. I BREAK OUT IN SARCASM.”

It reminds me of a recent video I watched. They were talking about wearing a mask even when vaccinated because vaccinated people can infect other people. That doesn’t even make sense. Why were these people vaccinated anyway? For their own entertainment or stupidity? They are still pushing the vaccines and mask, even for the vaccinated people. I think this is going on in Los Angeles. I just went to the mall, and mask wasn’t mandatory in OC area, although some people were still wearing a mask. I think all this stupidity is all a part of the NWO enslavement agenda to control everyone worldwide under One World Government.

The weather was a warm and humid 80 degrees today. It was nice to go out and walk around in the mall, as well as adajent stores in the area. I ended up walking 3.2 miles and 8,309 steps in the mall area. Not bad for mall walking…

There were still long lines by big designer boutiques, such as Chanel, Dior, Hermes, LV…