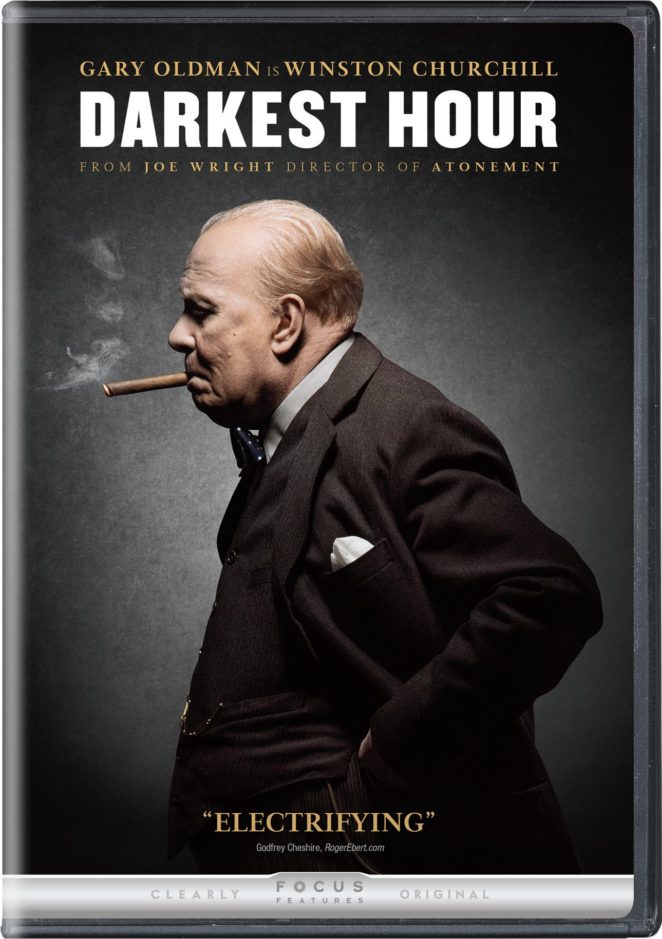 With Brexit raging it’s certainly British Prime Minister Theresa May’s Darkest Hour as the United Kingdom is on the brink of yet another seismic declaration of independence and strength. But in 1940 it was down to Winston Churchill to rally the troops as Prime Minister and decide Brains role in World War Two. Mussolini was willing to host a peace deal that may or may not see Germany keep to it and not invade Britain. We will never know what would have happened as the flatulent old bugger did indeed rally the nation and we took on Germany and, with the sizable help of the Americans, kicked their ass. You have to understand Brexit in that contest. We don’t want to be increasingly ruled by those we saved from the Nazis and those we beat.

It was the third British movie that was released in 2017 that looked at that crucial period in the war around Churchill, the other two being Christopher Nolan’s Dunkirk and ‘Churchill (2017)’ starring Brian Cox. They were being made around the time of the June 2016 referendum and many critics felt the films, and so their directors, were subtlety supporting Brexit, Nolan declaring soon after the vote that he probably voted Brexit. Gary Oldman is widely known as a center right working class lad and has said some edgy things in the pass and that had no time for Europe. A celebrity publicly backing Brexit is like an actor coming out as gay. It’s just not done. Politics aside his astounding performance as Churchill deserved the big four ‘Best Acting in a Leading Role’ awards, including his first Oscar. The lady who made him look just like Churchill got the films other Oscar.

It took a while for him to accept the role from director Jo Wright (Hanna, The Soloist) and there is no doubt vanity got the better of the 58-year-old actor and he was shocked to be asked to play the then 65-year-old, 15 stone Churchill for this film at this stage in his career. It took him a whole year to prepare for it and later said it was more a caricature of the cantankerous old man than historically accurate account, the same thing that could be said about the shortcuts and tweaks to history here to make this more a drama.  On The Graham Norton Show Oldman revealed that he smoked £30,000 worth of cigars per set .

“ if we allow women to vote it will mean theloss of social structure and the rise of every liberal cause under the sun…women are well represented by their fathers, brothers, and husband’

Hitler has invaded Czechoslovakia, Poland,Denmark, and Norway. 3 million German troops are now poised on the Belgian border and France are feebly folding to the Panzer regiment on the Dutch border,the Nazi’s ready to conquer the rest of Europe. In Britain, Parliament has lost faith in its leader Neville Chamberlain (Ronald Pickup) and the search for are placement has already begun.

It’s between Lord Halifax (Stephen Dillane) and Winston, Clement Atlee (David Schofield) coalition falling as the pacifist Labor option. But the Conservatives needs rallying experience and the bellicose Churchill gets the gig as Halifax backs out and Chamberlain gives Winston the nod as he feels he is the only man to unite parliament in wartime. The King(Ben Mendelson) swears him in and he is quickly thrown into the mire as the Germans push back the allies out of Belgium to the beaches. 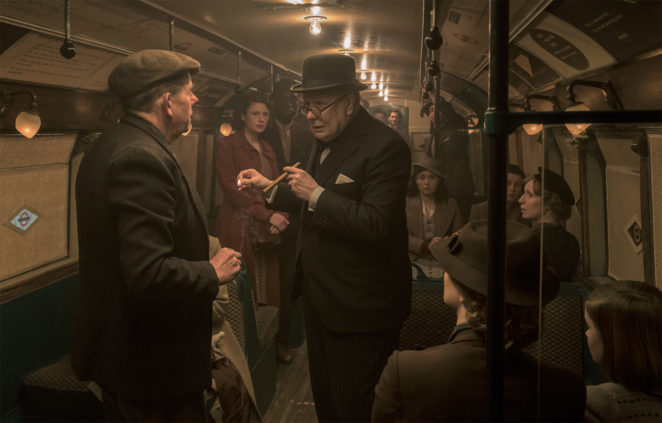 Taking residence at Number 10, Winston’s wife Clemmie (Kristin Scott Thomas) is exasperated by his behavior to other people of late but still loves the old toad and backing him all the way. After yet another typist /secretary walks out we meet pretty and timid Elizabeth Layton (Lily James), soon on his wrong side, close to walking out but grasps these areheady times and she is at the heart of it.

As her office is moved to Admiralty House and into the bunkers war is now raging with Germany as the boys take a pasting at Dunkirk and Churchill and his war cabinet try to figure out how to save what is most of the British Army. If they are left to be slaughtered then Britain is defenseless ad the war is lost, 400.000 allied troops pinned back to Dunkirk beach and the Germans 15 miles and closing. Even today we don’t realize that Germany is just 167 miles away from London. But Churchill has a plan, Operation Dynamo, mobilize a civilian fleet to being our lads home.

I Loved Dunkirk, if just for the incredible soundtrack – and Brexit undertones – but The Darkest Hour is more character study than a standout war movie. Oldman’s performance is fantastic and he is allbut the real Churchill onscreen, at least the cigar smoking one we imagine from the posters. The rest of the cast flutter around his performance so he can roar like a lion some more and the Brexit undertone is thee in the jingoism ads flag waving. We really do need this guy to sort Brexit. Movies stir emotions and this one certainly did.

The film is questionable on its historic accuracy and certainly exaggerates the Labour Party’s role in Winston Churchill becoming Prime Minister. Clement Attlee was actually prepared to serve in a coalition government led by Viscount Halifax in 1940 which doesn’t happen inthe movie. I know plot tweaks like that help to build drama but not in a film that needs to be historically accurate guys. When the end titles role it neglected to mention that while Winston Churchill lost the 1945 election, he later won the 1951 General Election. The Labor Party won the popular vote in 1951 though.Churchill was actually a social liberal in his later days.

As I say not a lot of actual war here although interesting to learn about aspects of Dunkirk we perhaps didn’t in the Chris Nolan film, , like the British sacrifice of the 5000 strong 30th Brigade and 3rd Royal Tank regiment, who distracted the Germans from Operation Dynamo.Churchill bravely took the decision to allow that but got 90% of the British Army off the beaches and back home because of that tactic..He could have signed an Armistice to save them that way but no guarantee Hitler would stop at the English Channel.