As annoying and irritating as Michael Moore’s fat head is to the right as he preaches socialism to the converted and empties the sizeable collection plates from the takings into his likewise sizable jacket pockets, you have to say his documentaries are still eye opening and entertaining. Stuff like Bowling for Columbine about Americas insane gun industry was way ahead of its time and Fahrenheit 911 as worrying as it was accurate. But after the last one, Capitalism: A Love Story (2009), punters stopped believing in the big man’s quest for justice and equality, especially when they found out he had a six million dollar pad in Manhattan, so he went quiet for six years, until ‘Where to Invade Next (2015).

Michael Moore’ was hospitalized with life-threatening pneumonia the week this film opened and had to cancel all his publicity appearances, perhaps karma for continuingly running down his country he makes so much money from. This film refers to non military action this time around and what other countries could bring to America, if they were invaded by America for other than cheap oil and terrorism reasons. Moore picks out nine countries – mostly in Europe – and reels off surprising benefits of living in those countries, like excellent workers rights, brilliant health services (not the UKs this time around), great school meals and surprisingly low crime rates. I fact checked then and they seem to be real. But how is it possible?

QUOTE : Michael Moore: ‘I am an American. I live in a great country that was born in genocide and built on the backs of slaves’.

Moore pitches up in Italy first, amazed to discover the super generous labor rights and workers higher wages. They get a lot of paid holidays there and even a two week paid honeymoon. Numerous bank holidays and Saints days bump up the paid days some more on top of their statutory ones and you can roll over any holiday you didn’t use to the next year. 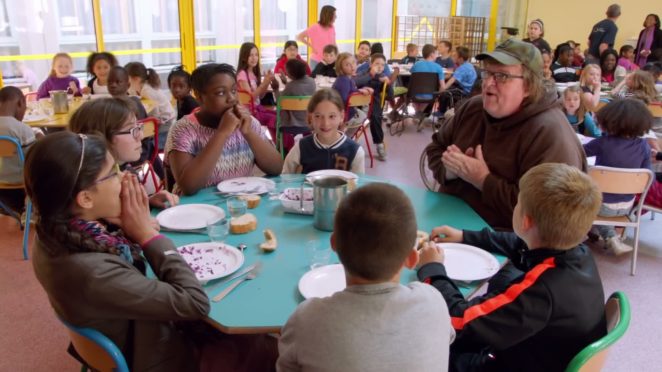 In France it’s all about school meals and sex education. Moore finds a school where the kids are served fancy meals, not burger and chips. The kids also discuss sex at just 6–years-old!

In Finland they have a cool education policy where kids have almost no homework and no standardized testing; Moore notes at this point that music and poetry have been eliminated in the American K-12 education system.

In Slovenia they have debt-free/tuition-fee free university. The University of Ljubljana teaches at least 100 courses in English and attracts students from all around the world that cash in on free fees.

In Norway the big man explores the humane prison system, visiting the minimum-security Bastøy Prison and maximum-security Halden Prison, where there is lot of freedom for prisoners and a low reoffending rate and they seem to be able to wander out of the door at anytime. They dot mention that most of the prison population is foreign.

In Tunisia we see post Muslim Africa women’s rights in action post Arab Spring revolution, including reproductive health, access to abortion and their role in the drafting of the Tunisian Constitution of 2014. Women’s Minister Rached Ghannouchi disapproves of compulsory hijab, saying, “The state should not tell women how to dress, or interfere in their lives.”

In Iceland it’s more women in power, speaking with Vigdís Finnbogadóttir, the world’s first democratically elected female president. The Best Party with Jón Gnarr being elected Mayor of Reykjavík City; the 2008–11 Icelandic financial crises and the criminal investigation and prosecution of bankers, with special prosecutor Ólafur Hauksson taking down all the bad guys from that era. America and Britain did not throw the Wall Street crooks in jail. 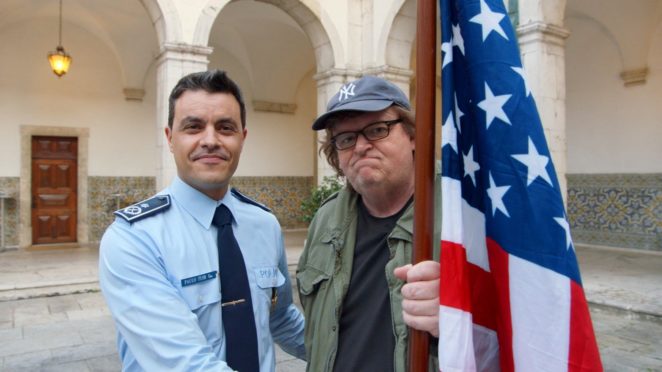 It did $4.46m to date so not the draw big flabby Moore once was. Slagging off America in the Trump era is not a big seller now. Moore’s angle is pointing out that many of these ideas actually originated in the U.S., such as the constitutional ban on cruel and unusual punishment, abolition of the death penalty, the struggle for the eight-hour day and the May Day holiday, the Equal Rights Movement for women, prosecution of financial fraud during the savings and loan crisis, etc. America seems to have dropped quite a few of them now. With zero hour’s contracts and temporary work giving employers increasing control over workers they have been able to cut down those paid holidays and employment rights.

As with all Moore films it’s a no excuses made polemic against right wing America although the website does back up all the films claims of those socialist utopian European countries. Problem is it’s all funded by absurd levels of EU Central bank loans and those countries are in massive debt to pay for it all. When he UK pull out of Europe and take their 17% of the total EU budget funding with them it won’t be so rosy. Socialism is not cheap.

I enjoyed it enough and amazed at some of the revelations but smart enough to know there are conditions on those claims. As with all the great rock bands there first couple of albums are their best as that’s when they were at their most angry and broke. Once the money comes in you soften up and lose your audience that was only ever there as they believed in your message. Moore is now a multi millionaire and simply not picking the big fights anymore.  Even his hardcore fans will say ‘so what’ to this films unrealistic message.

New Statesman –‘Even documentaries need dramatic tension; this one is comprised solely of contented people being informed that their lives are tickety-boo. After a while, you can’t take any Moore’.

Globe & Mail –‘This is sociology for dummies – and even they might find Moore’s points overly labored’.

The final Cut –‘Where to Invade Next is worth a look, for its small revelations. I mean, even if you’ve heard that kids in French state schools eat better food than our kids, actually seeing them eat scallops in fish broth is one of the film’s truly eloquent moments’.

New Zealand Herald –‘Where to Invade Next is a departure from Moore’s typically cynical, end-of-days vibe – this doco feels different, even optimistic. And although Moore does not present one cohesive solution, at least he’s asking the questions in the first place’.

The Mail –‘The documentary has no real solutions but is nevertheless stirring and at times inspiring’.

The Mail on Sunday –‘It’s entertaining but selective to the point of being actively misleading’.