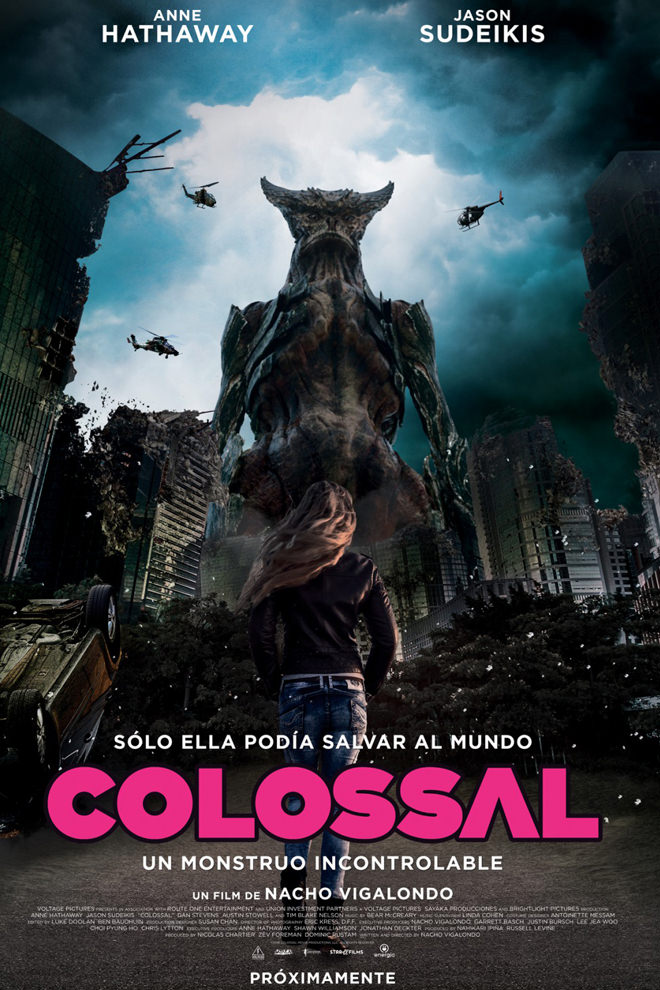 So here’s a quirky little comedy that’s hard to put into any genre, Black Comedy Sci-Fi what IMDB.COM settled on. It’s certainly different, its biggest appeal. With Marvel ruling the world in the special-effects big budget Blockbuster department for the last two decades it’s hard for much to sneak into the multiplexes and so nice when a tongue-in-cheek mid budget film like this gets attention.

It’s from the director of the rather brilliant French time travel film ‘Timecrimes (2007) but also the creator of the not so good Extraterrestrial (2011). Colossal is somewhere in the middle of those two on entertainment levels.

Thirtysomething Gloria Laurence (Anne Hathaway) has been an unemployed magazine feature writer for quite a while now and errant boozy behavior annoying her English boyfriend Tim (Dan Stevens). He decides to break up with her and boot her out from his swanky New York City apartment.

Broke and homeless she moves back to her hometown of Mainhead, New England, she quickly bumps into her childhood friend Oscar (Jason Sudeikes), who currently runs his late father’s bar. The two get on as he brings her some home comforts for her unfurnished old family home and then offers her a job at the bar to help her out some more, which Gloria jumps at. She likes a drink and the company of barfly’s and bars have lots of those.

Every night she hangs out and drinks until morning with Oscar and his best mates, Gareth (Tim Blake) and Joel (Austin Stowell), one night sleeping it off on a bench near a children’s playground. At the same time, a giant reptilian monster appears in Seoul, South Korea, trashing the city and the civilians in its wake like those Godzilla movies but this for real.

The film then takes a bizarre turns when she gradually realizes she is somehow connected to the monster and events in Seoul, and when she walks through the playground at exactly 8:05 am everyday, the monster suddenly appears in Seoul on cue. Further still she can control the 200ft beast, it mirroring her movements on TV as she waves her arms around and stamps her feet. She seems to have created this apparition in Seoul somehow. But her friendship is tested over this phenomenon as the increasingly fractious Oscar steps into the playground and becomes a 200 ft robot in the same Seoul, South Korea. Whatever is going on it has to be connected to something that happened between them.

This $15 million budget movie made just $4.5m back, rather unfair on the quality and fun ideas on show here. But this type of film simply won’t get a large multiplex release and so increasingly hard to get money to make them.

Its good fun and once the surreal twist kicks in the film becomes a little darker around issues of male control and alcoholism and it’s up to you to work out what it’s really about, if it’s actually about anything at all. It’s an interesting journey to see how the front cover of the DVD gets to explain itself and once the oddball narrative arrives, you go with it, and wonder where exactly how it’s going to end, it’s that whacky.

The fluffy Anne Hathaway is perfectly fine in rom-com mode in the lead and solid support from Sudeikis. It’s funny in places and dark in others but fair play for making it happen. It’s less Sci-Fi and more B-Movie larks and if you do enjoy something different and creative then Colossal is most definitely for you.