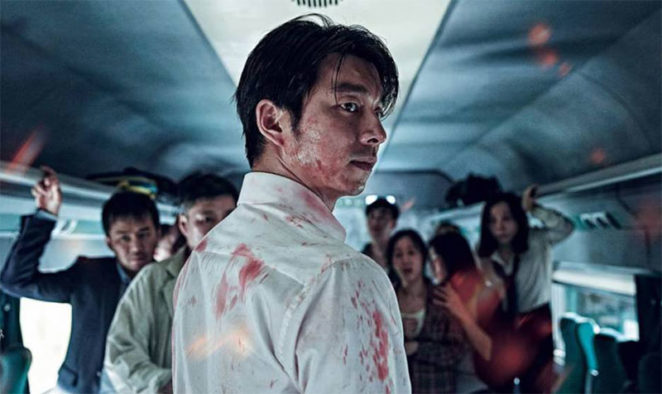 It’s fair to say Korean cinema is catching up fast on Japan and China in those Asian Extreme genres of horror, action and Sci-Fi, Train to Busan the sixth highest grossing Korean movie of all time, making $90 million in Korea alone, a lot for an Asian foreign language film from such a small country.

Its star packed with Korea’s most famous actors and directed by Yeon Sang-ho, a guy who doesn’t mess about, the film done and dusted in just three months, amazing considering the size and panoramic ambition of this zombie flick. Korean horror movies have a real distinct feel about them and so when this highly rated one popped up on TV in the UK I couldn’t resist.

Divorced and aloof fund manager Seok-woo (Gong Yoo) works long hours in capital city so to provide for his family and so very much an absentee father to his young daughter Su-an (Kim Su-an) an dhis ex wife. For her birthday the next day little Su wishes for dad to take her to Busan to see her mother. They board the KTX 101 bullet style train at Seoul Station and settle in. Just before the whistle goes and the train pulls away from the platform a sickly young girl staggers on to the train in distress.

In Seok woo’s carriage is tough working-class husband Sang-hwa (Ma Dong-seok) and his pregnant wife Seong-kyeong (Jung Yu-mi) seated opposite. Also in the carriage are a high school baseball team, the rich and egotistical COO Yong-suk (Kim Eui-sung), elderly sisters In-gil (Ye Soo-jung) and Jon-gil (Park Myung-sin), and a homeless man (Kim Chang-hwan) escaping the carnage. Only he is aware of the zombie outbreak.

The girl on the train has turned into a zombie and bitten train stewards helping her as the virus spreads down the train carriages. Baseball player Yong-guk (Jang Hyuk-jin), a girl named Jin-hee (Ahn So-hee), who has a crush on him, and several passengers escape to another car as the rabid mob steam down the carriages. News broadcasts report zombie outbreaks (reported as riots) nationwide and the next station, Cheonan-Asan, has already been attacked by zombies so the driver is instructed to whizz straight through it. It’s also grim at Daejeon station and seems the whole of Korea has been infected. Frantic phone calls by the survivors on the train hint at sanctuary at Busan, Korea’s second biggest city. But will they be able to last that long as the zombies munch down the train?

Had high hopes for this one as I like my zombie movies but turned out to be fairly perfunctory. The Asian Extreme genre was cool back in the day as it was cool and naive as it was action packed and stylish but this one feels more Hollywood as it aims at a wider audience. Korean films were very Korean. Not anymore.

The traditional cultural messages of love, family and honor are there as ever in an Asian movie and that means unconventional endings as heroism and honor are more important. They love to moralize, a metaphorical swipe of the Samurai sword, if you like.

Our zombies are the fast moving biter ones and infection is rapid. Heroes are chomped in order of selfishness and usefulness with a twist or two. The movie is bold in its vision but restrained in other areas as the zombies spread through the train as the survivors race towards Busan and potential sanctuary.

The two hour run time feels longer as the film runs out of track around the basic concept as the passengers slowly team up and not every man or woman for themselves. It is just about enjoyable going up against the hundreds of other zombie movies although it’s not the big movie in the genre you hoped for.