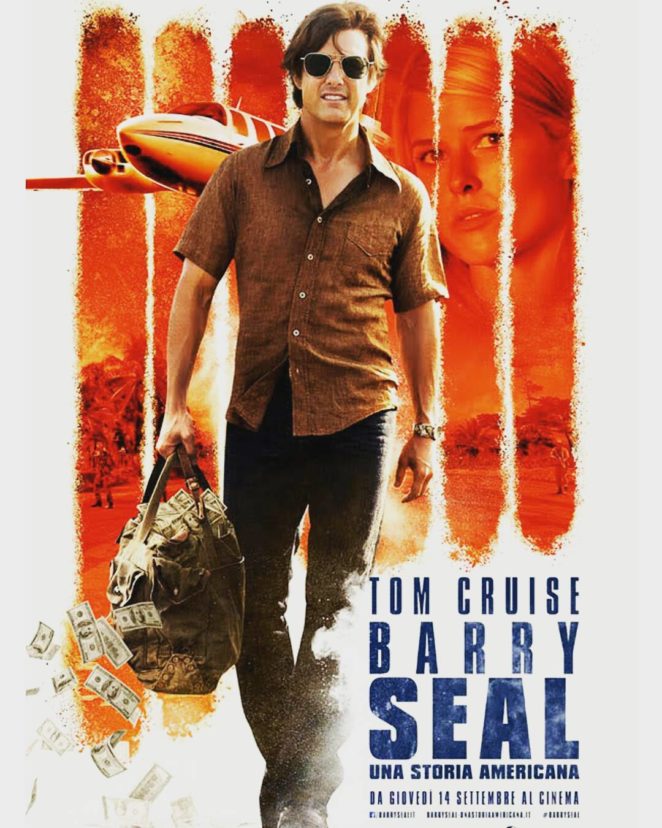 It’s probably fair to say Tom Cruise can sell any movie and the only true and genuine A List movie star still out there these days. But he has stopped chasing Oscars for a bit and trying for the big bucks in the franchises like Mission Impossible and the Jack Reacher stuff and so the star dust just fading a little. The second Jack Reacher was not that great. I don’t think there will be a third.

In-between those two he teamed up with director Doug Liman (The Wall, The Bourne Identity, Mr and Mrs Smith…) for their second movie together after the enjoyable Sci-Fi Edge of Tomorrow, for this exaggerated biopic of Barry Seal, a man involved with the notorious Iran-Contra affair where Oliver North, the US government and the CIA, using drug money to pay for arms to fuel an insurgency in central America to overthrow the communist government as the Cold War raged.

The real Barry Seal looked nothing like Tom Cruise, of course, nicknamed “El Gordo” by members of the Medellin Cartel in Columbia, which translates to “the fat one”. The script for this one featured on the 2014 Black List of the most liked un-produced film scripts on the shelf still. It’s a fairly lose account of true events around that time although the lengths the CIA want to so they could overthrow democratically elected governments anything is possible and so still believable. The contras didn’t even want to overthrow the Nicaraguan government that much and only encouraged to by heavy American money and arms flow, tactics involving killing innocent people. It’s a dark period in American history we don’t seem to want to talk about but flatten other countries who try the same thing.

Barry Seal (Cruise) is the youngest pilot TWA have ever had and enjoys smuggling a little bit of contraband on the side on commercial flights to boost his salary. When he is quietly busted by the CIA they offer him a deal to be privateer in South America running reconnaissance flights over the rebels in Central America in a swanky twin engine plane.  He can’t resist the challenge and soon being shot at by Sandinista’s as he produces great intel for the CIA.

It’s not long before he runs into a fledgling drug gang on the border of Columbia and Panama who persuade him to run drugs to America in his twin-seater. The money is good and his CIA handler Monty ‘Schafer’ (Domhnall Gleeson) will turn a blind eye, if the intelligence keeps coming and he runs guns to the Contras as well. His beautiful wife Lucy (Sarah Wright) is none the wiser as they relocate to Kansas after the cops raid them but the money keeps pouring in.

When Pablo Escobar (Mauricio Mejía) recruits him to run his drugs the planes get bigger and the risks increase, still the CIA letting Seal do his thing on the side. But when the US policy changes from overthrowing rebels to the Drug War it’s not long before the CIA want Seal to betray his paymasters, not a good idea, especially as he now has a young family.

Although a biopic you can forget that as this is dragged and kicked so far away from what actually happened it just becomes an action movie. It’s great for Cruise as he loves to jump around and get sweaty and do all the stunts and as a qualified pilot did most of the flying scenes here. It’s a movie where he is on screen most of the time and he does love that.

It’s his first R Rated movie since 2008 and his lowest opening weekend in a Cruise led film for a quite a while, its $60 million budget doing $134 million back to date. It’s not bad film in any way though and I enjoyed it. It looks good and glam and hints at criticism at a corrupt US foreign policy, rare from Cruise. It’s not too action packed and Cruise does at least create a character and so not just Cruise on screen.

It’s not a film to watch and find out about the stuff that went on and so a moral journey but a film that exploits its best assets – the story, the director and Cruise. Its good fun and light enough for all the family and funny in places to, not something you can pin on Cruise. Definitely one to catch on streaming or TV services. America does very bad things but like their movies present them as palatable and so not something to fret about.