It is odd how a show which had such an impact on life for the past thirty years would have been not only a bit of a ‘hard sell’ to get it produced, but Star Trek (TOS) only lasted three seasons.

When Gene Roddenberry came up with the idea; he sold it to the producers with the sentence;  “It would be like a Wagon Train in space.”

Wagon Train  was a very popular American series about a … Wagon Train.  It was based on a historical fact. In the 1800s to travel West was dangerous.   There weren’t highways, there were not maps and all sorts  disasters, from falling into a sink hole to encroaching on First Nation land, to starving to death were possible.

For people to move West there was a whole program.  Pioneers would assemble in a particular city and when there were enough,  a long line of covered wagons would depart.  In the wagons were people. They might have walked some, but often sat in the wagons, which contained all their possessions, and where they would sleep.

The leader of the wagon train,  knew the route and would have armed men with him, as well as trackers to catch animals to eat.

Wagon Train, the weekly television show based on this journey had a small core cast. Every week there would  be new characters, new adventures, as the line of Wagons moved West.

Using this term; “…wagon train in space” gave an idea to the producers pretty much what Star Trek would be about;  a space ship flying in space with new characters and new adventures each week. 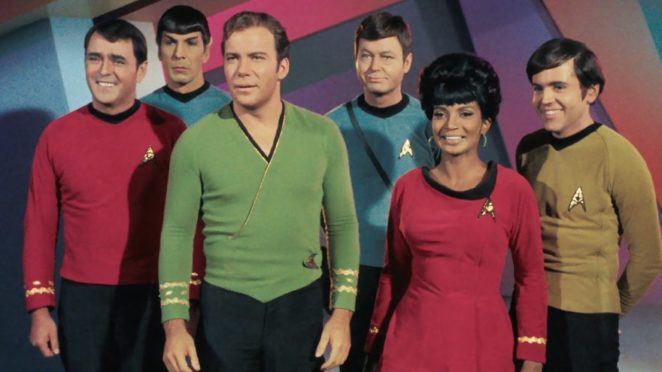 The ‘episodic’ series always has the disconnect and the lack of a focus. The Original Series, however, brought a lot of ideas and characters that the public liked and used as a kind of pattern.   James Kirk was the bit reckless captain. Spock was the most iconic; a half Vulcan who dealt with logic above emotion. The Doctor was a bit racist in mouth when it came to Spock but cared about him. Uhuru was the first Black woman to star in a major show, and there was the Japanese Sulu, the Russian Chekov, the Scottish Engineer.

When most of us got our cell phones, we said ‘Beam me up, Scotty’, thinking of the pocket transformer used to beam down to the planet and beam up.

Some of us would use the term, “He’s dead, Jim”, when something, (a computer) died.

The cast of the Original Trek had a loyalty, so they returned for the various movies that followed.

Over time an entire culture was created, with pasts and reasons and ideals and ideas, so that the show has become more than just a television serial.