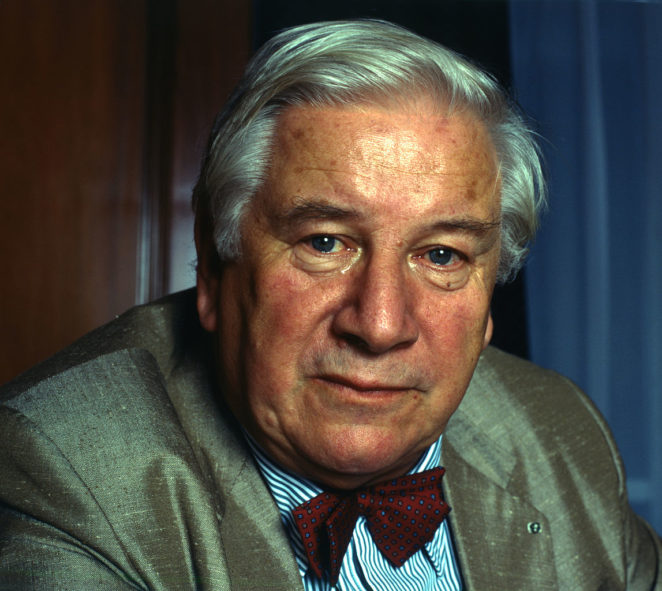 Peter Ustinov was a writer, actor, director, raconteur and more, who delighted audiences on stage, television and film screen with his ready wit and larger-than-life character.

He was born on 16th April 1921 in London, the only child of Jona von Ustinow and his wife Nadezhda. His ancestry was extremely mixed, including Russian, German and French, and his parents had arrived in England from Russia not long before he was born. His father had been a journalist, but later worked as an intelligence officer for the British government.

Peter was educated at Westminster School but did not do well, and his mother enrolled him at a drama school at the age of 16, having been impressed by his early talent as a mimic. He obtained several minor parts in repertory theatre.

He was married in 1940 to Isolde Denham, the daughter of an actor, when both bride and groom were 19. World War II had broken out, and many such marriages took place when the man was on the verge of going away to fight and might never return.

In Ustinov’s case, the war presented an opportunity to develop his career as a playwright, his first full-length play being written while he was an infantry private. He spent much of the war producing films for propaganda and recruitment purposes, the most substantial being “The Way Ahead” in 1944.

On being demobilised in 1946, Ustinov continued to write and direct for the cinema, and made a good impression on stage in Anthony Quayle’s production of “Crime and Punishment” in which he upstaged John Gielgud. His 1951 film performance as Nero in “Quo Vadis” earned him an Oscar nomination and the attention of a much wider audience.

However, his personal life was not so successful, as he and his wife divorced in 1950, although Peter was awarded custody of their five-year-old daughter.

1951 also saw the production of two of Ustinov’s best plays, “The Love of Four Colonels” and “The Moment of Truth”. The former had a two-year run of more than 800 performances, and was also highly successful in Paris and New York.

Between 1952 and 1955 Peter Ustinov teamed up with Peter Jones in a radio comedy series, “In All Directions”, which was largely improvised. Ustinov and Jones played two East End spivs who constantly got into trouble, and Ustinov also played the parts of many of the characters they encountered.

Ustinov’s second marriage took place in 1954, his new wife being Suzanne Cloutier, a French-Canadian actress. They had a son and two daughters, but the marriage was not a happy one and they eventually divorced in 1971.

During the 1950s and 1960s Ustinov continued to write plays and appear on stage and screen. Among his successes as a playwright was “Romanoff and Juliet” (1956), and he won best supporting actor Oscars for “Spartacus” in 1960 and “Topkapi” in 1964. He combined his talents as producer, director, actor and writer in “Billy Budd” (1962, based on the novel by Herman Melville) which is widely regarded as one of Ustinov’s finest contributions to cinema.

However, Ustinov found it difficult to compete with the rising generation of “angry young men” such as John Osborne, and he also wasted his acting talents on a number of low quality pot-boilers in the 1970s in order to recoup his losses after his second divorce.

He found a new direction in 1968 when he agreed to become a goodwill ambassador for UNICEF, a position that he took very seriously and to which he gave much of his attention during his later life.

His third marriage took place in June 1972, his new wife being Hélène du Lau d’Allemans, who was a journalist. Although childless, this was the happiest of his three marriages and lasted until his death in 2004.

Ustinov reappeared to the wider public eye in 1978 when he played Hercule Poirot in “Death on the Nile”, this being the first of six appearances as Agatha Christie’s famous detective (the last being “Appointment with Death” in 1988). Ustinov was perhaps an unlikely Poirot, being a much larger man than Christie had envisaged, but he was nonetheless very convincing in the role.

Other roles included a performance as King Lear in Stratford, Ontario, in 1979, which was the first time in 30 years that he had appeared on stage in a play that he had not written himself. He had long said that the only Shakespeare role that interested him was Lear, and it is to be regretted that he was unable to reprise the role in London.

Ustinov was often seen on television and heard on radio in the role of interviewee, as he had a wealth of stories and reminiscences that made him a popular choice. His old art of mimicry never left him and he could produce just about any national accent at a moment’s notice (he was in any case fluent in five languages besides English).

However, it was as an interviewer, in 1984, that he had the most shocking experience of his life. He was set to interview the Indian Prime Minister, Indira Gandhi, for an Irish television series on 31st October when she was assassinated by her bodyguards as she walked across her garden in New Delhi to meet him.

In his later years, although he continued to write and to act and direct, he spread his net much wider, not only with UNICEF but by becoming President of the World Federalist Movement (an organisation devoted to breaking down barriers between the peoples of nations across the world) and Chancellor of the University of Durham. In 1998 he helped to establish the “Peter Ustinov Foundation” that aims to provide schools and medical care for children in developing countries. There are also six “Peter Ustinov Schools” in Germany devoted to furthering his philosophy of mutual respect, a positive attitude, and dedication to helping those in need.

He received many honours, both for his work in entertainment and his humanitarian efforts. These included a knighthood in 1990, a number of honorary degrees, and many international awards.

Although he travelled widely, he was based for much of his later life in Switzerland, for tax purposes, and took Swiss citizenship. He died at a clinic near his home on Lake Geneva on 28th March 2004, at the age of 82, from heart failure brought on by chronic diabetes.

Since his death, Sir Peter Ustinov’s influence continues to be felt in the humanitarian institutions he left behind him. For people who remember his performances he will always be unforgettable, whether in serious roles or comedy. It has been said that he spread his many talents too thinly, and that he should have concentrated on only a few of his many skills. However, one feels that doing so would have bored him rigid, because he always wanted to be doing something different, as that was what excited him. He was certainly a “Jack of all trades”, and master of many.