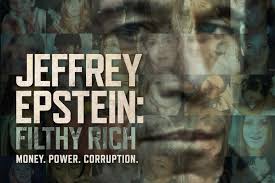 Three prominent men from the boisterous bustling and hustling streets of Manhattan have dominated the news headlines in recent years, Donald Trump, Harvey Weinstein and Jeffrey Epstein, all three having telling documentaries done on them in recent months over ‘alleged’ sexually assault and poor business practice and two of the three ending up in jail, one dead, and the reaming free one clearly belonging behind bars. Weinstein preyed on young starlets, Trump used his wealth to get women and Epstein into teenagers.

With Epstein it was very much was it rape or simply prostitution? Well for Epstein it didn’t seem to matter and nor did the age. In his mind if young girls accepted money for a sexual act then it was prostitution, end of, and a lot of young women did take his money, of which he enjoyed a lot of both girls and money. It’s not unusual, of course, for powerful men to do deviant things and manipulate young women and also for them to hide behind lawyers and friends in powerful places to get away with it, and keep doing it, Epstein guilty of that to. But Epstein seemed to get away with it for a long time to protect those powerful friends and so just ramped up his deviancy.

The first episode looks at the enigmatic Epstein’s early days and how he made his money, or how he may have made his money. He blagged his way into a teaching position at a top NY school and then got a job on Wall Street, ending up involved with a Bernie Madoff type character running a Ponzi scheme in the 1980s, Epstein avoiding jail time. It’s then a similar mysterious ascent of wealth as he courted the rich and famous and built lavish home across America, including an island in the US Virgin chain. Again, no one really knows how he made his money other than he had a lot of it.

We then get into his passion for young women, mostly from the sanctuary of his palatial Florida home, where he would get people to procure young women off the street – near high schools – to come and give him a massage at his home in return for cash. For a lot of young blue collar girls $300 was well worth the trip, and a lot of them took up the offer. Some of the more streetwise girls who knew what was coming went along with it when it got sexual whilst others fled in tears, his long term girlfriend Giselle Maxwell, daughter of Robert Maxwell, also at the heart of the seedy story.

The girls assaulted make rape am abuse claims to camera and some well documented on those attacks. Some of the girls seem genuine about their disgust whilst others accept their actions but all claim victim status. He forced them into their actions is the repeated mantra. The vast network of girls that visited the mansion suggests word didn’t travel fast on how bad he was. There were more sophisticated women who were seduced by the life and flew on private plains around the world to be his personal assistants or masseurs and well remunerated for their company. Most of them claim rape and trafficking in the years they spent with him but none of them ever mentioned that to passport control at the many airports they were whisked through on private jets. He eventually got a plea-bargain conviction for a sexual act with a 14-year-old girl but not the jail time he deserved.

Now that Epstein is dead there is no doubt this documentary ends up as the case for the prosecution in future civil trials for the lawyers and plaintiffs to get hold of his millions. He may have anticipated that and two days before he killed himself he put all his wealth in an offshore trust. The girls were exploited but their testament to camera feels like they have been coached to put their case, rather than the honest truth. I’m not sure many of the girls saw it as rape at the time but if you are under 17 in most US states its statutory rape. He was charged again in 2015 for trafficking and the flood gates opened as the girls came forward in droves. Some had already been paid off to be quiet and so let down other girls, why may have fallen prey to Epstein, why Weinstein also was allowed to keep going with his assaults. With that guy many women made a choice to stay quiet and not report the advances and abuse in return for a movie career.

Famous people are also weaved into the story, Prince Andrew the big one; also old pic’s of Epstein with Bill Clinton, Donald Trump and also sorts, some on his private island.  I’m sure most were thee to party with young girls but not underage. Epstein NY house was rigged up with secret cameras to catch anyone important on film that did do that though.

This documentary is a polemic and not that balanced. The girls are never really pushed on whether some of them were prostitutes and now looking to make money off the scandal. In rape and sexual abuse trails women and girls are given anonymity for life but here very keen to dump that to tell their story, some would say reshape their story towards that payout. The shame of their pasts comes through but you never really feel the women are being 100% honest on how Epstein really was for his kicks. Some wanted to marry him and some of the girls received 5 figure sums on the island for their presence but all blame their naivety and coercion for ending up there. Today they are mostly dumpy and plain women and living a boring life and so the chance to make a multi-million dollar payout could set them up for life. Either way some were abused and we are glad this man has gone.