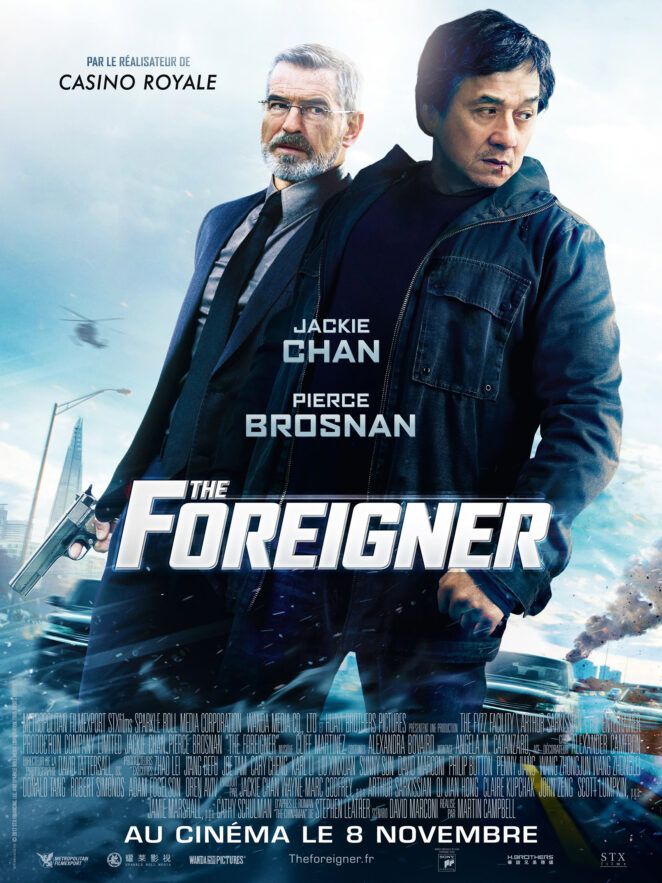 Here’s a fun action movie as a James Bond goes head-to-head with Jackie Chan in a Taken style revenge movie. Both Pierce Brosnan and Jackie Chan have heavily stereotypes themselves in their genres and for ex James Bonds it’s particularly tough to get roles after losing that A-list status. Chan, of course, is as equally iconic in the industry and both men getting on age wise so have ended up in the aging action hero role genre of the middle aged man revenge movie which is always entertaining for some reason, as is The Foreigner.

London restaurant owner Quan Ngoc Minh (Jackie Chan) has just lost his young daughter to an Irish Republican splinter group bomb in the city, vowing vengeance on those who did it, leaving his business partner Lam Fan (Katie Leung) in the restaurant alone and heading out on his mission.

He is not messing around and goes straight to the top of the MET, forcing a meeting with Commander Bromley (Ray Fearon), who palms him off promising he will catch these guys. But Quan needs names and approaches First minster of Ireland Liam Hennessy (Pierce Brosnan) next for those potential killers, a Gerry Adams type figure who is the man who should no. Quan politely asks for the names of the killer but rebutted, Hennessey saying he has no idea who is behind it. Quan tells him he will give him those names eventually and leaves the Ministers offices – and a surprise for him in the toilet.

Still no names, Quan steps up his campaign to get those names and it turns out the baby faced restaurateur has the skills to achieve that as he intimidates Hennessey into action to find the killers. As always with Irish politics it’s a tangled web of intrigue and betrayal to come.

Although this has the whiff of straight to video its surprisingly good fun and looks decent for its money, Chan is not that credible as the angry avenging father as he is so cute but just about gets away with it here and throws in some kung fu moves to top it and he even gets to sing the theme song… “A Common Man”.

Director Martin Campbell instructs Pierce Brosnon to play it as Gerry Adams and he even looks like him. What Gerry Adams made of that would be interesting to know, Brosnon’s character a composite of the bad guys back then.

Action wise it ramps up nicely and increasingly silly in a fun way as Chan’s character turns out to be more than a match for the ex IRA guys. It’s just a fun idea bringing these two iconic actors together outside their comfort zones. The second act brings duplicity to the plot as things twist hard to give the movie a hernia although it’s easy to follow and the twists allows the films strong female characters to come into the plot more in the final act.

We all love Taken and if you enjoyed that you will get enough from this. The revenge movie is one of those film genres that seem to appeal to all. I suppose it’s the middle-aged guy still kicking butt that we root for that is that mystery magic dust. The critics were less impressed for some reason but audience ratings on the same sites pretty good.