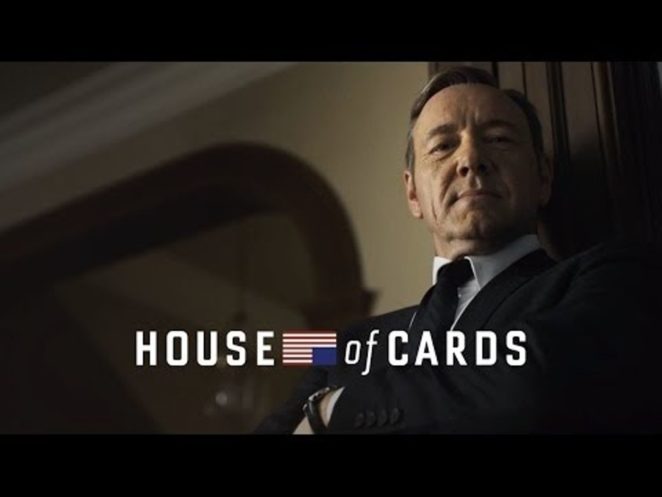 One of the great ironies of Kevin Spaces demise is it was from behaving just like his TV and film characters that made him so popular. Did his accusers get confused between the man and the guy in the House of Cards we wonder? If you get touched up by a Hollywood star who is a deviant on TV do dollar signs spin in your eyeballs? I always felt American Beauty was really about Kevin Spacey coming out as gay man and the promiscuity with young men that can come with that scene, than a film about a mid life crisis. Now we know the truth.

House of Cards is inspired by the British version from the 1980s and deals with duplicity, murder, ambition and treachery in the halls of power, in this case The White House. It follows the rise of Speaker of the House Frank Underwood (Spacey) up that house of cards to be the Democrat President of the United States, season four following his push for a second term, his wife and First lady Clair Underwood (Robin Wright), increasingly alienating herself from him as she too seeks more power in DC.

It’s a multi Golden Globe and Emmy award winning show and ran for six seasons. The first two seasons cost a total of $100 million dollars, Netflix winning the bidding award to make the show as they agreed to do two seasons straight off the bat. David Fincher agreed to direct as he loved Netflix’s hands off approach and so all concerned can be more creative on a genre that revels in that world. Netflix would lose $39 million when they had to cut Spacey and reshoot stuff from the final season after his sexual abuse allegations.

Kevin Spacey as Francis J. Underwood, the President of the United States

Paul Sparks as Thomas Yates, an author and speechwriter for the Underwoods

Joel Kinnaman as Will Conway, the Republican nominee for president.

Lars Mikkelsen as Viktor Petrov, the President of the Russian Federation

In season four President Underwood’s relationship is over with his wife Claire after various misdemeanors as she begins to position herself for her own career in politics. People are beginning to talk on why Claire is absent from the Presidents election campaign, unaware of the marriage breakdown.

Underwood has a setback when an unfortunate family photo surfaces in his home state of South Carolina whilst Clair is hiding in Texas with her mother (Ellen Burstyn), the two hardly close. Douglas “Doug” Stamper (Michael Kelly), the White House Chief of Staff, is on the case to reign her in.

Heather Dunbar (Elizabeth Marvel) is Underwood’s biggest challenge for Democratic Party leader as the Democratic Party concave approaches and both sides up to their dirty tricks to win the nomination.

The handsome square-jawed Will Conway (Joel Kinnaman), the Republican nominee for president and Governor of New York, is heading the polls to be president and the use of his beautiful wife and family through social media his popularity,  and as sharp as the incumbent President when it comes to winning hearts and minds on the campaign trail.

Clair plans to use Texas for a run at congress, which would involve usurping a black congress lady with wide party support. Congresswoman Doris Jones (Cicely Tyson) fully intent on handing that role to her daughter Celia (Lisa Gay Hamilton). With Frank and Claire’s team working against each other and beginning to hurt Frank’s Presidential reelection the two agree on a truce of sorts to put on a united front that both gives Frank a chance of another term in The White House and Claire a greater political role.

I watched the first three seasons back-to-back on DVD about two years ago and then had a rest. I just felt it was getting samey. Now I am back on Netflix it was time to catch up and I sailed through season four and the break helped me to enjoy it more. I was a huge West Wing fan back in the day and this show helped me to get my fix of political drama.

It’s a very topical season as it tangles with those modern day political issues of how social media and the internet can manipulate how people vote and behave and also looks at a version of an ISIS threat. Here it doesn’t quite go into the fake news thing but explores data trawling to target voters unethically. I never believe people are that influenced by fake news as the natural inclination is to be cynical and question those stories on the same search engine platform they are delivered.

Its enjoyable stuff and Spacey on top form once again as the psychopathic president and Robin Wright coming to the fore with some of her best work as the ambitious and equally ruthless Presidents wife. It was this season she discovered Spacey was still being paid more than her per episode and that was soon put right. She is worth every penny and quite brilliant in it, a sexy strong woman like you won’t believe.

It remains an intelligent watch and even if you don’t know the ins and outs of the US political system it remains fascinating to watch all the double dealing and back stabbing that clearly goes on, especially in this Donald Trump surreal climate. Season five is next on my agenda.

Francis Underwood: “A great man once said, everything is about sex. Except sex. Sex is about power!”.