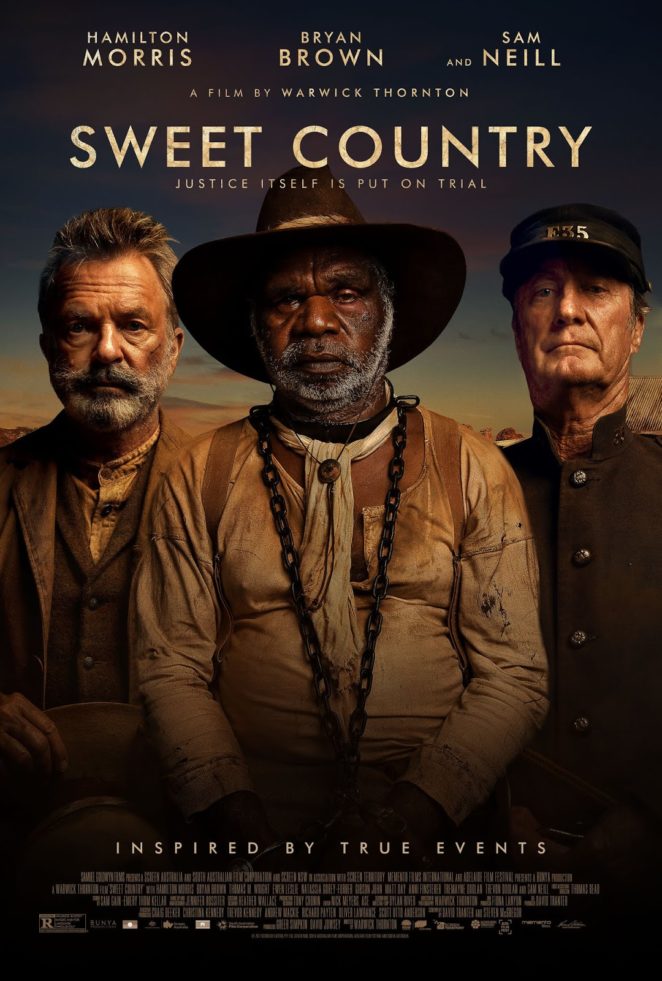 Australian films used to have either Sam Neil or Bryan Brown in them back in the day. But Sam made it big with Jurassic Park and left his domestic market to Tinsel Town and Hugo Weaving and Guy Pearce picking up the slack. But they, to, headed to Hollywood and that left Bryan Brown home alone with not much to do but have a beer with Paul Hogan, who has long since returned to being an Aussie cliché. He has only done five films this century since Crocodile Dundee 2, two of them last year, and so it doesn’t always work out for Aussies abroad. But Aussie flick Sweet Country sees Brown and Neil team up for the first time in ten years in a based on a true story period western about pre war rural Australia and the prejudices and hierarchy between whites and Aboriginals. The two are best mates in real life and made a decent little film here.

The film got a ton of film festival attention because of its aboriginal actors and themes, supposedly the first western aboriginal big budget movie. It’s funded from various Australian sources keen to be associated with positives around that community. It swept the boards at the various Australian awards ceremonies last year.

One day he takes things too far with Kelly’s family and tragedy strikes, meaning Sam has to run to stay alive. In the posse on his trail are local copper Sergeant Fletcher (Bryan Brown), a canny Aboriginal tracker called Archie (Gibson John), who witnessed the crime, and Thomas M. Wright (Mick Kennedy), an acquaintance of the dead man, plus some locals. They lose one cop when they encounter a hostile tribe deep in the Bush; Fletcher convinced Archie is leading them into trouble, rather than to Kelly. Aboriginals stick together after all. But Sam understands what he has done and will be caught, soon to face trail in his local town.

So, through flashback we see the crime, the pursuit and the trial, documented in history there. Director Warwick Thornton has a story to tell and does it well. As most of the money is cultural to make the film the Aboriginals are the good guys and all the white men (bar Sam Neil as the white conscious of the movie) are two dimensional racists. I’m pretty sure colonial Australia wasn’t that bad. Cleary there were was always tensions between the two but when I was there in the 1990s most Aboriginals were drunk all the time or living away out.

It’s a solid and engaging movie for its two hours but bog standard as far as westerns go. That true story was probably the norm as far as court cases went. Sam and Brown are only in the movie on their minor roles to get it made and funded and Aboriginal acting is generally men and women of very few words. But Australia’s conscious is being tested because of their history and so no surprise what is a decent move swept the boards in the Aussie film festivals and awards for political reasons. This is no Strictly Ballroom.