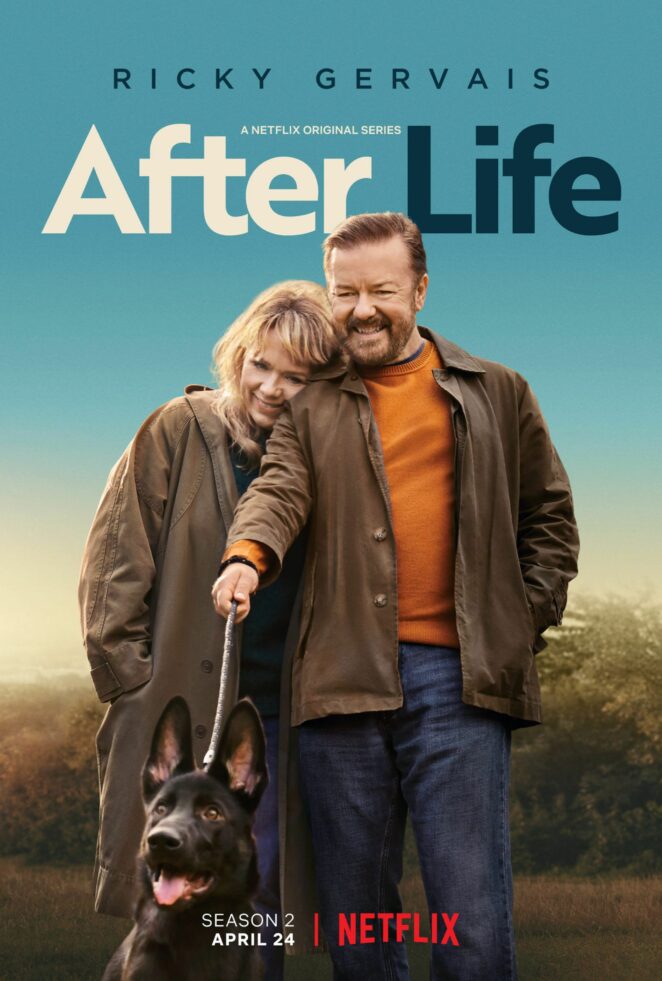 This image was downloaded from Serienjunkies.de

Ricky Gervais is not everyone’s cup of tea, as we Brit’s say, women the least admiring of his often misogynist and mildly offensive comedy that takes a dig at just about everyone. Ricky would say his comedy characters are just that and so it’s not Ricky Gervais doing the mocking. Others would disagree. But he is funny and the brilliant series The Office one of the great sitcoms of all time so his new stuff gets traction.

The skill Ricky has is to be subtly offensive about race, gender, disability and all manner of things through his ‘comedy’ in a way that a middle-class audience doesn’t feel guilty about laughing at those things. And they do laugh about those things, the little voice in their heads enjoying a wry smile. The funniest jokes and comedy situations in life are the mostly taboo. If a working-class comic told the same jokes to a mostly working-class audience they would quickly be accused of being racist and bigoted, like their audience. Ricky allows the righteous to laugh at everything.

Afterlife sees Ricky play that obnoxious character many people think he is in real life, Tony Johnson, a man who is as miserable as can be, to himself and those around him, his excuse that his young wife has died of cancer. Maybe this is a concession by Ricky that the ‘real me’ is more like Ricky than we suspected although to Ricky’s credit he can actually act and not just a stand-up comic.

Season two and Tony is still moping around the small newspaper office of the Tambury Gazette feeling sorry for himself after his wife’s death from cancer where his follow workers and shrinking friend group have to put up with his crap and surprisingly keen to. His brother-in-law Matt (Tom Basden) runs the office and the most tolerant of all to Tony’s grief, Matt having problems of his own as his marriage falls apart and the paper losing money, turning to an odious shrink (Paul Kaye) for support.

Tony is Head of Features and dispatched to meet the communities oddballs and losers for filler stories and a sad bunch they are, attention seekers and lonely people looking for their 15 minutes of fame. It’s a target rich environment for a cynical Tony, photographer Lenny (Tony Way) tagging along to reign Tony in with these weirdo’s.

The newspaper workers on the desks all seem to want to help Tony get through this pain but having to put up with his mood swings challenging. Outside the office various character’s are circling Tony with cynicism and support, his kind of people, a prostitute called Roxy (Roisin Conaty), his slob of a postman (Joe Wilkinson), a hoarder (Brian Gittins) and widow (Penelope Wilton), only his pet dog Alsatian a true friend.

The people around him are keeping him alive as he contemplates suicide daily, only video recordings from his dead wife (Diane Morgan) keeping a smile on his face. His dad (David Bradley) has dementia in a care home but Tony visits most days, an attractive nurse, Emma, (Ashley Jensen) another drawn to the miserable sod.

Ricky needs a TV vehicle to deliver his thing and this is just the latest, no more, no less. I’m sure he sees it more as a profound comedy of pathos and grief to flex his acting muscles in another tale of the losers in life but to me it was Ricky delivering is unique sneery humor through yet another conduit. He can’t help dropping in those little ‘observations’ about those things we talked about earlier and in some ways that’s why people tune in. Ricky is one of very few TV types able to get away with that.

Season two is not great and really not needed, going over familiar season one ground, which I felt was complete first time up. But he has bought it back and it has had mixed reviews. If you have seen season one then you don’t need to see this. There is nothing new here. I chuckled a bit here and there but the magic gone from season one. Ricky acts away but his irritating character becomes exactly that and you want to smack them both with the back of your hand for making this. Everyone else in it is just a dartboard for Ricky’s character to throw darts at. Some of the characters are just completely out of place, like the obnoxious shrink, another reason to turn away from season two. By the end of this you just think who really cares for this horrible guy and even his dead wife would hate him?