So a Bryan Cranston movie, the man who bought us Walter White and Breaking Bad, one of the great TV dramas of all time and on top form here. That show was great PR for him and a career rejuvenation to get some decent movies and so he did. He had small parts in classic 80s TV shows and then bigger parts in the 1990s, most notable in Malcolm in the Middle, but not a face to remember. The movie work took over the TV work when he made it huge in BB, resulting in better movie scripts like this one, the excellent Trumbo performance earning him an Oscar nomination. The 53-year-old has 163 acting credits!

The Infiltrator is based on the true story of Robert Mazur, a deep cover US customs agent whose low-budget sting in a drug cartel led to more than one hundred criminal indictments and the collapse of the world’s seventh largest private bank in 1991, the Bank of Credit and Commerce International (BCCI), forfeiting $550 million in U.S. assets after pleading guilty to fraud, larceny and money-laundering. We all remember that collapse but not why it collapsed. Since then international banks including BNP Paribas, Standard Chartered Bank, Lloyd’s, ING, ABN Amro, Credit Suisse, Barclays, RBS, HSBC, UBS, and Wells Fargo have all paid fines for failing to report suspicious money transfers. But we lack the political will to do anything about it and so it continues. Drug money reached $400 billion last year. We have, however, no problem in busting welfare fraud.

Portions of the film were shot at Dunsfold Aerodrome which is the same airfield used for Top Gear (2002) UK.

Its 1980s, the height of the violent drug war in North and South America, U.S. Customs special agent Robert Mazur (Cranston) and his partner Emir Abreu (John Leguizamo) doing some solid street busts in South Florida but nothing big. But one investigation connects a Miami mob to bigger things and, with his undercover alias as accountant “Bob Musella”, Mazur begins to win the trust of a pivotal player for a drug lord and offers a plan to help clean their dirty cash. He starts to meet more senior mobsters and that ramps up the threats to his life from rival players, soon run off the road by machine gun fire in Tampa. But his customs bosses are impressed with his work as he goes deeper and deeper. 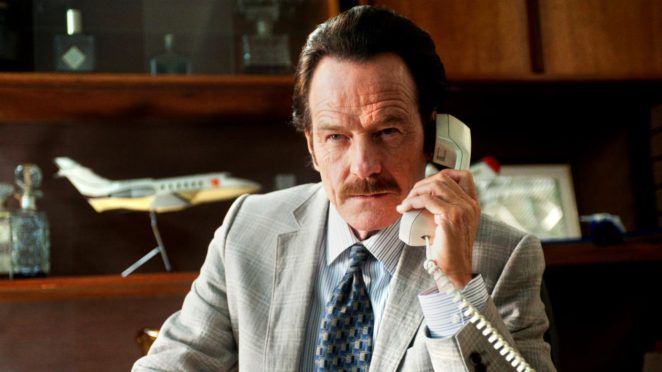 The plan is to infiltrate the world’s largest cartel and help expose the money-laundering organization of drug lord Pablo Escobar. But this soon draws threats to his family as the pressure from the CIA to back off and rival cartels has him fearing for his life. One slip up on his story and real identity and he’s dead. When you have a briefcase with a microphone in it recording everything they say the risks are high of that slip, especially when he wins the trust of Dominic (Joseph Gilgun), Escobar’s money man in Panama.

So an inversion of his Breaking Bad character allows Cranston, in effect, to cleanse himself of Walter White with his wholesome honest drug crime busting agent here in this run of the mill true crime story. The film has a Boxset feel to it and reminded me of stuff like Narcos. Cranston’s performance is the film and not a lot else to see. At least we know why the BCCI collapsed now.

It’s from director Brad Furman (The Lincoln Lawyer) and sadly tanked in the box office, its $37m budget making just $18m back, a bit of a bomb. I think it suffered because it’s in-between TV and feature film and, of course, this stuff has been done before and much better in the Italian American genre, Donnie Brasco, Scarface and Goodfellas to name but three. You are never going to touch that level in 2017 although it’s much better than American Hustle. We like these movies to have more swagger, cool violence and catchy dialect. This doesn’t have much of that. The problem is you never really care about Mazur.

I enjoyed it to a point but I would like it to have been a smarter movie than it was. It’s essentially a good performance by the likeable Cranston chasing an Oscar but not a lot more. I would have liked to know more about the fraud and the characters involved but mostly cliché around the cartel and US law enforcement playing out actual events ending up here. It’s not really one to look out for and I would just stick Donnie Brasco on. Forget about it!

The Times –‘Holy Columbian marching powder, you’ll be hard-pressed to find a more adrenaline-soaked, palpitation-inducing, stress-ride at the cinema’.

The NY Times –‘Although the ensemble and energy of The Infiltrator are good, the film as a whole comes up a little short’.

Reel Talk –‘The Infiltrator is what I like to call a decent Saturday laundry film, something that you can put on, walk away from it and let it run on it’s own for about 10 minutes, return to it and not be lost at all.

Independent –‘A shamelessly derivative but very energetic thriller that has Bryan Cranston in the kind of role that Al Pacino might have relished a generation ago’.

Empire Magazine –‘Often gripping, and elevated by Cranston’s superb central performance. But it’s hard not to feel like we’ve seen this before, often and done better.

Guardian –‘Cranston’s talent – and Furman’s – go a little to waste.