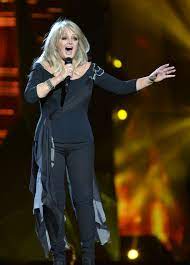 She is one of my all-time favorite singers. Bonnie Tyler is a Welsh singer, songwriter, businesswoman and active philanthropist. She started out her career as a local singer in Swansea and got famous when her album The World Starts Tonight was released in 1977 with the singles “Lost in France” and ‘More Than a Lover”. She made it on the charts with her popular single “It’s a Heartache” in 1978 reaching number one in several European countries. Bonnie Tyler won the 10th World Popular Song Festival with her 1979 single “Sitting on the Edge of the Ocean”.

Her career really took off in the 1980s with international hits such as “Total Eclipse of the Heart”. “Holding Out for a Hero”, “If you were a Woman and I Was a Man”, “Here She Comes”, and ‘Loving You’s a Dirty Job but Somebody’s Gotta Do It”. At this time Bonnie Tyler also made the move from rock to pop and soft rock and this brought her great success in continental Europe with the songs “Bitterblue” and “Fools Lullaby”.

Her latest album Rocks and Honey included the single “Believe in Me” which was used as the U.K.’s entry for the Eurovision Song Contest 2013. After the contest, Tyler got two Eurovision Song Contest Radio Awards for Best Song and Best Singer. Her most recent singles “This Is Gonna Hurt” and “Love is the Knife” were just released in August and September of 2013. She just returned from her South Africa Tour 2013.

Bonnie Tyler has won three Golden Europa awards and an Echo Award. She has been recognized as the “International First Lady of Rock”. She is and has been an amazing talent with a voice that just makes you rock and feel along with every song she sings.

Among my very favorites was Bonnie Tyler’s Silhouette in Red which was her tenth album released in Scandinavia, Europe and South Africa in 1993 and in Japan and Brazil in 1994. Practically every song on this album makes me remember some point in my life. I have included a video of one of the songs from this album “Send Me the Pillow”.