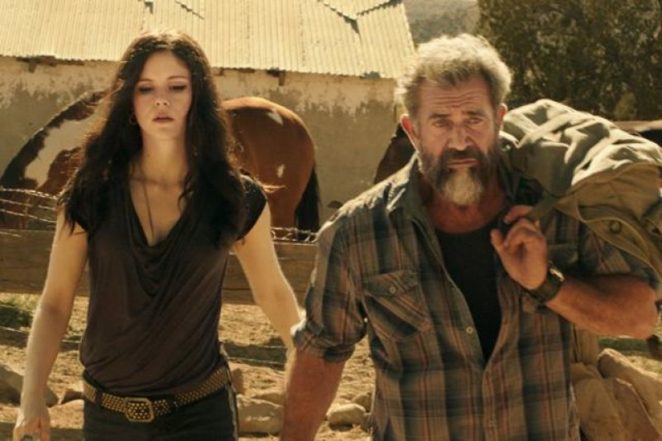 So Mel Gibson, he of the racist, religious rants and just about everything else back in the 1990s, destroying his A-LIST status. He was actually born in America and left New York when he was ten and clearly picked up a lot of Aussie attitude Down Under. But we love old blue eyes for it and long may it continue… a genuine movie maverick in what can be a stale Hollywood these days. I’m surprised he has not been caught up in the Weinstein thing. You may have noticed that all the male stars named in the Weinstein scandal are not the younger good looking ones in Hollywood and a real feminist female power-play going on here.

Blood Father is in that popular older guy that can still kick ass movie category that Liam Neeson now rules and other A-Listers like Stallone and Schwarzenegger have recently dabbled in, mixing the irony of their previous action hero status with jokes about their now creaky bones and paying homage to previous films they appeared in to add to that appeal. It’s hard not to like this new genre. Blood Fathers $15 million budget rerunning $4.8m at the box office suggests this one won’t be back. Gibson is OK though.

Gorgeous runaway teen Lydia (Erin Moriarty) is trying to impress her criminal boyfriend Jonah (Diego Luna) by buying bullets for him and his gang at Wall-Mart. She is unaware the boys may actually be using those bullets soon when they pitch up to kill a redneck family who apparently stole money from them and stashed in the walls of the house. After killing one guy, Jonah ties up an older woman and forces Lydia to kill her to earn her spurs in the gang, which she so doesn’t want to do, in the struggle accidentally shooting Jonah in the neck instead, escaping the crime scene in panic.

Desperate for funds to run east, she calls her estranged father (Mel Gibson). He is an ex-con and recovering alcoholic, out on parole after serving a seven stretch for violent robbery and so the best advice she can get. Surprised and elated his little girl has finally got in touch he picks her up from the bus station in his rusty Camero, taking her back to his trailer park, where he learns that she is not only a drug addict but also an alcoholic, like father like daughter. She learns he is a bit of a loser and a drunk.Dad, of course, has no cash and so days pass in his grotty mobile home as she lays low from the gang and dad attends AA meetings with his friend and sponsor Kirby (William H. Macy) and does some tattoo work on the side. But uneventfully some of the gang find her and shoot up the trailer park, meaning dad will have to break his strict parole conditions by shooting back. He does and the chase is on, Jonah linked to the Mexican drug cartels and so they have to take each other down for disrespect reasons.

I was looking forward to this as I enjoy the rickety old guy fight back genre and hoping for more of the same here. Gibson is good as that slightly unbalanced action hero as we all know him but the magic didn’t quite happen here for me. It gets surprisingly good write -ups in the broadsheets around the world but the plot is pretty feeble and without Gibson you are in straight to DVD territory here. Some of the writing lifts proceedings with humorous lines to match the graphic violence but you don’t have that feeling of tongue-in-cheek slick cool these movies need to work best. The lumbering Liam Neeson stuff is fabulous as he is mean but cool where as Gibson looks old on screen and you know he is only doing these movies as he can’t get much else. It was the same thing in his films like Get the Gringo, Edge of Darkness and Machete Kills. The chubby Russell Crowe will be next to slump over the bar in this genre I fear.

It’s a solid 3/5 and only Gibson’s 7th film in ten years as his 60th birthday arrives. The iconic blue eyes look tired and his regulation movie height of 5ft 10 looks smaller now. As I say the magic is gone and he needs a big one to get back on top. There is not much left of Mad Max. But there is just enough to entertain here and Erin Moriarty a very beautiful young women as his daughter. Will H Macy’s career has also drifted and Magnolia seems a long time ago. Gibson fans only.

Financial Times –‘The dialogue goes like a Gatling gun and the action is its match’.

Independent –‘Gibson is only 60 years old, a few years younger than Liam Neeson, and so could conceivably continue appearing in action movies like this for years to come. He clearly has the knack for it’.

Daily Telegraph –‘In the grizzled spectacle Gibson willingly makes of himself, it has a B-movie equivalent of that A-plus Mickey Rourke comeback, delivered with just enough clout to count as a step in the right direction’.

The Mail –‘It would’ve been a straight-to-video thing if its star wasn’t named ‘Mel Gibson’.

Total Film –‘Jean-François Richet elevates the predictable action with swagger, while a grizzled Gibson gives us glimpses of his glory days’.

Movie Talk –‘The ensuing action is very much in the Taken vein… but director Jean-François Richet handles the action briskly, while Mel displays an impressive emotional vulnerability – when he isn’t knocking lumps out of the bad guys’