So Avenue 5, from the pen of Armando Iannucci, he of The Thick of It, Veep, the new David Copperfield movie and all manner of cool staff, one of Britain’s premier and intelligent comedy writers, here with his new Sci-Fi send up, Red Dwarf meets Galaxy Quest.

We have had this space comedy theme before in the UK with the rather funny Hyperspace with Miranda Hart but it got cancelled after just one season as no one really got into it. I did and loved it and so looking forward to Avenue 5’s January release over here in the U.K.

The star is Hugh Laurie as hapless spaceship captain Ryan Clark, guiding a tourist group through space, Iannucci openly stealing from shows like The Love Boat, The Poseidon Adventure, and Star Trek:Voyager to complete his unique vision. Galaxy quest was very funny and this one to look out for.

Captain Ryan Clark (Hugh Laurie) is the ship’s American captain of Avenue 5, the latest spaceship design of obnoxious tech billionaire Herman Judd (Josh Gad), offering space cruises of the solar system, this one half way past Jupiter with 5000 tourists plus on it having a merry old time. But they hit a gravity bump and it jolts the ship 1.1% off its plotted course which means they will take three years to get home to Earth, rather than two months. The crew and guests are not best pleased. To keep up spirits we have Spike Williams (Ethan Phillips) on board, a former Mars astronaut, there to provide the guest with space stuff.

The ship is controlled from Earth by Mission Controller Rav Mulcair (Nikki Amuka-Bird) and the main crew on the bridge are actually actors, including Ryan, who is actually British. The engineers in the guts of the ship are the only ones who know how the ship works, headed by technician Billie McEvoy (Lenora Crichlow), her motley crew of technicians increasingly pressured to come up with solutions as the captain drinks himself silly. 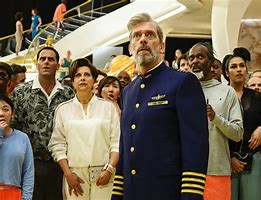 Matt Spencer (Zach Woods as) is the ships head of customer relations, his abrasive style not appreciated in the stressful situation. His nemesis is Karen Kelly (Rebecca Front), a noisy American tourist from Texas, who is on the way to running the ship.

Its good fun and I laughed in a few places. Because there are so many new shows coming out on places like Netflix and Amazon Prime they have to grab you early on or you will move on to the next one. I managed a whole season of Silicone Valley but have not gone back yet but generally I give new shows three episodes and if it doesn’t bite then on to the next show. I have raced through all six episodes of season one of Avenue 5 and enjoyed it.

The show looks great and you can see money has been spent on it and the special effects, the Judd Control Room actually the McLaren Formula 1 racing team’s media briefing room. The cast is a seasoned comedy lineup with Zach Woods from American Office as the lugubrious onboard Customer Services man particularly funny and with High Laurie in full ham mode centers the jokes. Everyone else chips in and, of course, we get tons of space jokes around flashing lights on control boards and the surprising revelation that a fine film of human waste is used to protect space ships human cargo from radiation, plenty of tongue-in-cheek stuff like that in this.

It’s a new show so you may not have it in your territories yet but one to look out for. Hugh Laurie is a skilled comedy actor able o carry a show like this and although no real narrative to the show it does send up arrogant tech billionaires egomaniacs like Elon Musk with gleeful abandon. If you like Galaxy Quest Just seek Avenue 5 out and give it a go.