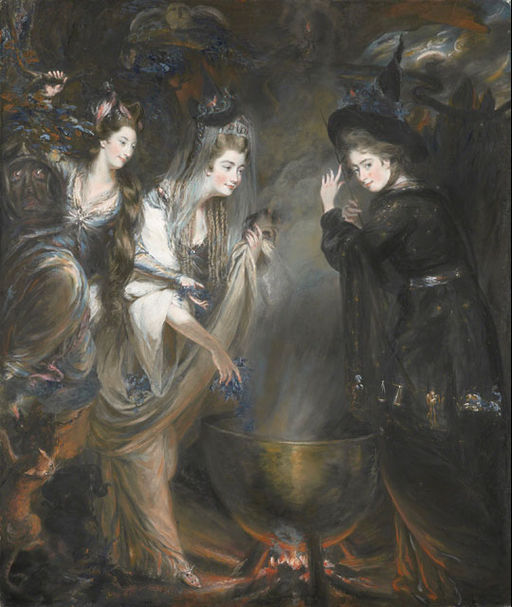 Mabel, Doris and Alice, the residents of Blasted Heath Cottage, were pondering what to do about their entry for the next craft show at Glamis Castle, the home of Lord and Lady Macbeth. This annual event was not to be missed, and the three ladies had been regular participants for many years.

However, comments had been made after last year’s show that maybe they should make a few changes, given that their entries in the Pickles and Preserves class had given the judges particularly nasty stomach bugs and even caused one of them to lose a toe and grow an extra finger. Nobody thought they should be banned altogether – apart that is, from the unfortunate judge who now had all the correct digits but not necessarily in the right order – but perhaps they should consider entering show classes that did not actually involve the judges having to eat anything they had prepared.

It was after a visit to Sainsbury’s that Doris got the bright idea of what they could do. She had been scanning the shelves for fresh supplies of  batwing pressé – without success – when she spotted Lady Macduff who was carrying a very attractive shopping bag made from evenly-sized patches of differently patterned material sewn together. Surely, she thought to herself, the three of them could come up with something similar to enter in the Bags and Accessories class at the craft show?

“That’s what we should do”, she said to the others when she got home. “We’ll make a tote bag.”

“A toad bag?” said Alice, whose hearing was far from perfect. “Your pet toad for example? We could cut of his head, scoop out his innards …”

“Hold it, sisters.” said Mabel, pulling them apart. “I reckon this tote bag idea is a good one. We just need to get as many people as we can to contribute patches of material and we’ll sew them together to make a bag. Could be a winner!”

So the three of them split up, went their separate ways, and met again a week later when they had collected contributions from people they knew.

Doris had been to see Iago, whose offering was the handkerchief he had pinched from Desdemona. “This rag has got everyone into so much trouble”, he had told her, “that sewing it into a tote bag is probably the best thing to do with it.”

Alice’s contribution was two bright yellow stockings. “I was given these by Malvolio”, she said. “He reckons that they should be perfect for a tote bag competition, as long as yellow-hating Olivia is not on the judging panel.”

“If she is”, said Doris, “we can always feed her some of our newt chutney before the judging starts. That should take her out of the reckoning for long enough.”

Mabel had been to see Hamlet, who had provided a piece of fine damask cloth that could be made into several patches.

“He said that this had been part of the arras curtain in his mother’s bedroom, but it had been ruined when he stuck his sword through it and killed Polonius who was hiding on the other side. He said that his mother was pretty cut up about it.”

“Presumably not quite as cut up as Polonius”, Alice offered.

“I got the impression that she was more bothered about the arras”, said Mabel. “She’d paid good money for it and gave Hamlet a piece of her mind afterwards. The bloodstains were very difficult to shift.”

“No matter”, said Doris. “That’s nothing new for Glamis Castle – her ladyship is always complaining about that sort of thing.”

Doris was able to supply some other bloodstained fabric squares, courtesy of Shylock who had explained that blood spatter was sometimes inevitable when extracting pounds of flesh from recalcitrant customers.

Richard III had also sent along some quite expensive looking pieces that he said were no longer needed by their former owners, although he was not prepared to give any further details.

“I reckon we’ve got enough”, said Mabel. “Now who’s going to sew them together to make a bag?”

“Not me”, said Alice. “With these great thick fingers? I can’t even thread a needle, let alone sew.”

“And me”, said Mabel. “Looks like we’re stymied then.”

“In other words”, said Alice, there’s no way we can make a tote bag, so we can’t enter anything at the craft fair.”

“It’s back to Pickles and Preserves then”, said Doris. “But we’ve been banned from entering that class, due to the fact that whatever we submit usually has unforeseen consequences.”

“We’ll have to cheat, then” said Mabel. “Suppose we enter our Cockroach and Slug Surprise but use someone’s else’s name as a cover?”

“Great idea”, said Alice. “Got anyone in mind?”

“Do you think we’d get away with calling ourselves Juliet Capulet?”