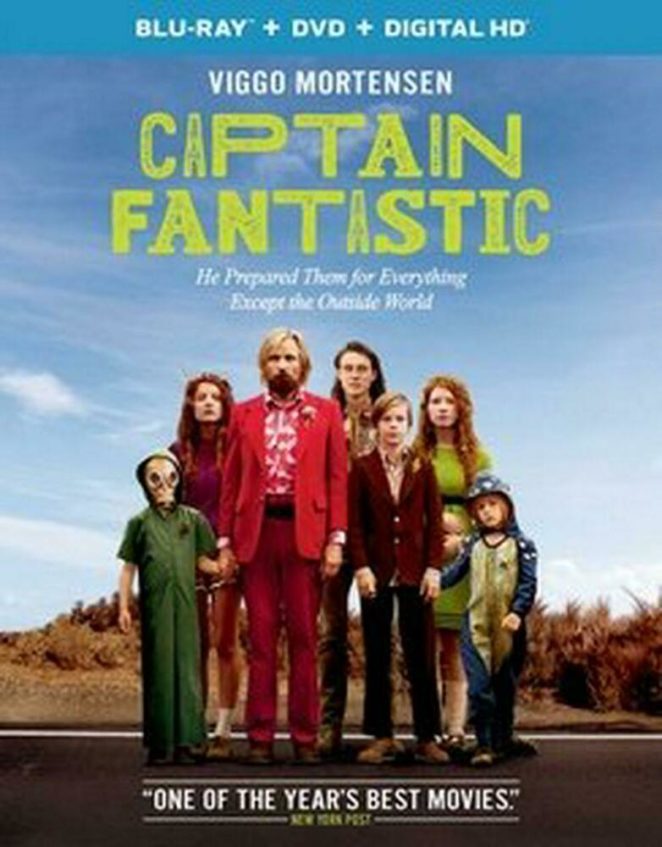 So Captain Fantastic, and a third Best Actor Oscar nomination for Vigo Mortensen( Green Book and Eastern Promises) but not to be third time lucky, the first actor to be nominated in a film not up for any other major Oscars in a very long time, such was his eye-catching performance here. It’s from actor turned director Matt Ross, and based loosely on Matt’s experiences growing up as a hippy child of the Indianapolis woods, the theme of this enjoyable comedy drama.

There are not as many enjoyable films of this type around and so when one gets highly rated by all you have to take a look. Viggo quickly went all method and serious with his acting over the years and so this one was a nice diversion from that stuff. He does about one film a year these days and only two projects for the next three years.

Ben Cash (Viggo) lives out in the woods in an old cabin with his kids living anti capitalist lifestyle where he home schools them in an unconventional way, everything from rock climbing to Noam Chomsky on the syllabus. The kids seem to love it and intelligent and self-sufficient like no other, if somewhat disconnected from the real world they rarely visit.

But they are about to visit that world as they pack themselves into a converted yellow school bus after Ben receives the bad news at the local store that Leslie(, his wife and their mom, has died after being hospitalized for depression. Whilst at the store the kids collect the mail dad has been withholding from them. They demand to see mom and so it’s off to the funeral on a road trip to reconnect with the world and their more conventional relatives.

They stay with Ben’s sister-in-law Clair (Erin Moriarty) and husband David (Teddy Van Ee), who quickly questions his parenting skills. But Ben’s kids are way smarter than hers. Leslie’s dad Jack (Frank Langella) blames Ben for her death and not best pleased he is here. As the funeral nears tension rise and the family storm the church in eccentric garb, Ben claiming his wife is Buddhist and should be cremated, and so the family chaos begins.

Not a bad little film here that’s funny and inventive. Viggo is charismatic and commanding in the lead and the young family cast around him as funny and energetic. These types of antiestablishment families really do exist in America and quite plentiful, whole communities of them down in the South along the Bayous and deep in the woods.

It’s intelligently scripted with solid laughs and set pieces and flows nicely so not to get bored. It asks questions about how numbing state education is and maybe out kids do need a more rounded education although this lots version somewhat questionable, the killing of deer scene perhaps a little too far. This is no Deliverance deal though and the kids aware and middle class so very much about that conflict than backwoodsman stuff.

Highly recommend it and its very high 7.9 rating on IMDB unusual for this type of mid budget drama and well worth it. Viggo at his best and one to watch out for on DVD or TV.